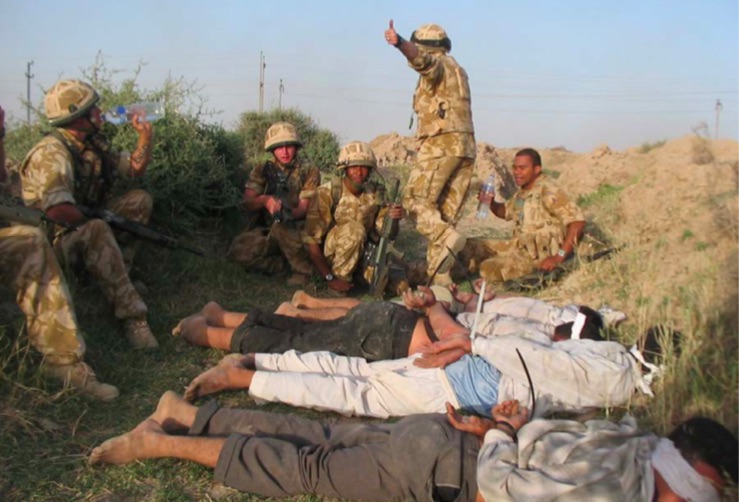 The Ministry of Defence settled 417 compensation claims last year totalling several million pounds to Iraqis subjected to cruel and inhuman treatment, arbitrary detention or assault by British troops, according to a report in the Guardian. (Pic from the Al Sweady inquiry)

Martyn Day, senior partner at Leigh Day Solicitors told the paper that ‘while we’ve had politicians like David Cameron and Theresa May criticising us for supposedly ambulance chasing, the MoD has been quietly settling claims’.

The amount of damages paid out to the mistreated Iraqi nationals varied. Although many of the facts of the cases remain confidential, one case included a claimant receiving £33,000 in damages for unlawful detention and beating suffered. Another case included Iraqi merchant seamen where one received a payment of £28,000 after being assaulted and ‘hooding’ (the placing of a hood over the entire head of a prisoner – widely considered a form of torture).

Despite the number of successful compensations claims conceded and settled by the MoD, the UK government has taken steps to make it more difficult for civilians to take action against the Ministry of Defence with the Overseas Operations Act. The controversial act received Royal Assent and became law in April this year. The legislation introduces a limitation period for bringing civil claims regarding overseas operations to just six years after the event, as well as a presumption against criminal prosecutions of service personnel after five years have lapsed.

The treatment of Iraqis at the hands of British troops was the subject of the Al Sweady Inquiry – the five-year public inquiry that commenced in 2009 that had been set up following allegations of mistreatment by the British army in Iraq.

The inquiry concluded that prisoners were subjected to ill-treatment breaching Geneva Convention provisions and MoD rules – including the use of interrogation techniques such as blind-folding and sleep deprivation. However, the report dismissed allegations, including the responsibility of soldiers for the murder of prisoners as they concluded that these allegations were ‘wholly without foundation and entirely the product of deliberate lies, reckless speculation and ingrained hostility’.