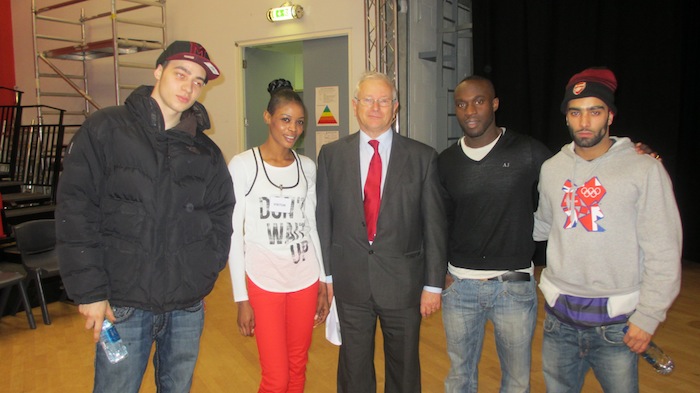 ‘Is it ever OK to break the law?’ It was one of the questions we asked of some 200 GCSE students at Mossbourne Community Academy in Hackney last week, writes Jon Robins. As part of an innovative public legal education project being run by Hackney Community Law Centre, University College London and www.thejusticegap.com, the pupils had been given handheld clickers to record their responses to a set of questions on their views of the law and to test their understanding of key legal concepts.

Almost eight out of 10 pupils (79%) reckoned ‘Yes’ it was OK to break the law and one in five (21%) said ‘No’. So in what circumstances might it be reasonable to commit a crime, asked Jennie Rawlings, a law student at UCL. The responses were various – self-defence, necessity (‘… stealing a loaf of bread, to feed a family…’), ‘being Batman’. ‘So you are suggesting that there might be some overarching “greater good” requirement such as people whose lives need saving?’ queried Jennie.

Maybe. Mossbourne Academy must confound the expectations of many visitors; it certainly did mine. For a start it’s situated in an enormous Richard Rogers-designed building around the corner from Hackney Downs station, which I failed to spot despite having living round the corner for years and having been described as ‘a low-rise palace of wood and glass, splashed with primary colours’. It is a stone’s throw from the Pembury Estate which saw some of last summer’s worst rioting (and which is over the road from Hackney Law Centre). Some 60% of the school’s intake is reserved for pupils living within a kilometre of the school and over one third receive free school meals (twice the national average). Over the last eight years Mossbourne has made the transition from one of Britain’s worst-performing schools to ‘outstanding’. The excellence of its results (10 six formers had offers from Cambridge University last year) has led to huge political and press interest.

The Mossbourne students, in their gray blazers with red piping, are a smart bunch with a good understanding the legal concepts. I am rather taken aback that more than nine out 10 (91%) students correctly identify ‘10 years’ as the correct age of criminal legal responsibility.

The aims of the Mind the JusticeGap project are three-fold: to explain to young people key concepts about the law that will help in their day-to-day lives; to encourage an understanding that the law can make a positive contribution to their lives (as opposed to reinforcing a sense that ‘the law’ is something to come into conflict with); and to encourage the view that a career as a lawyer is one that is available to people whatever their background. The project started this summer with a survey of 100 young people in the borough conducted by a team of peer reviewers organized by Hackney Council for Voluntary Services who are also involved in the project. We are determined the project genuinely reflects the experience of the young people we want to reach.

Hence we were at Mossbourne at the invitation of Caroline Neil, head of PSHCE. We got off to a good start. More than four out of 10 pupils (44%) expressed an interest in becoming a lawyer and over half (55%) thought that a career in law was a career that could “make a difference”. More than six out of ten (63%) thought a career as a lawyer was ‘more respectable’ than being a politician (two thirds (66%) thought it was more respectable than being a journalist).

The end result will be a website written by UCL students in conjunction with an editorial board of young people from Hackney and overseen by Hackney Law Centre with www.thejusticegap.com as editorial control. There will be an ongoing series of events in schools and colleges in Hackney which is part of the law centre’s response to the LASPO cuts. The project’s editorial board includes Michael Mansfield QC and Lord Willy Bach. Last week the former justice minister had a walk-on role as judge in a mock bail application in the case of a young man who takes part in a violent robbery of a cab driver on Lower Clapton Road  – the former criminal barrister (who last year described LASPO as ‘wicked’) refused bail (more than two-thirds of our pupils disagreed with the peer).

As enthusiastic as some of the Mossbourne pupils were about the prospect of a career in law, there was also a streak of realism running through any expectations: two thirds (66%) disagreed with the proposition that the legal profession was ‘open to all’ and almost half (46%) thought that ‘most lawyers’ went to private school. Some six out of 10 students (61%) rightly identified that less than 5% of the judiciary came from nonwhite backgrounds.

‘Anyone can be a lawyer but your background affects how easy it is,’ one of the pupils Oliver Chen tells me, after the session ended. ‘It’s one of those jobs where who you know can really benefit you.’

What did they make of the fact that only some 3% of judges actually come from ethnic minority backgrounds? What kind of message does that send out? ‘That it’s really difficult to become a barrister or a judge – and that it depends on your ethnicity. It’s not shocking. I expected it,’ says Keiran Hylton.

Sadly, being stopped by the police is the first experience of ‘the law’ for many young people in Hackney. Deji Adeoshun, youth programmes officer with Hackney CVS, runs a stop and search monitoring group. He and his three colleagues enthusiastically enacted a familiar tableau – a rather aggressive stop and search by two brusque officers of two uncooperative teens. The pupils were asked if they knew what they could and could not do in such a scenario (more than half (53%) reckoned they did). ‘There are things you need to know,’ Deji Adeoshun told the pupils. ‘First and foremost the officer must give their name; if they are in plain clothes they have to give you their warrant card or the number to identify them; and also the code under which they are searching you and explain to you your rights.’

‘You shouldn’t feel bad just because you happen to be the one they stop,’ Adeoshun continued; adding that he was stopped the previous morning on his way into the office. ‘I was actually quite upset. It’s is never nice.’

The stop and search sketch clearly resonated with the students. ‘One of the biggest problems is that young people don’t know their rights. That is why a lot of people get into trouble,’ Ayesha Griffiths tells me afterwards. ‘I agree,’ said Keiran Hylton. ‘If we know our rights, it’s a different way to get across our message – rather than being violent.’

Hackney Community Law Centre threatened with closure…
One quarter of teachers witness the illegal removal…
The Justice Gap over the summer
Hackney Council to pay £26,000 for failing to secure…
Latin Village redevelopment would 'decimate' community