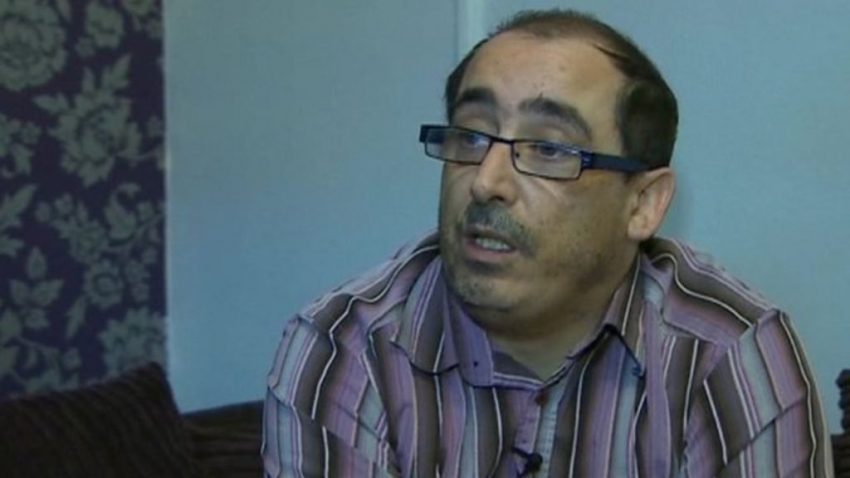 Michael O Brien in an interview with the BBC

Michael O’Brien talks about his 30 years fight for justice. ‘Knowing that I was doing a life sentence for somebody else’s crime. What can be worse than that?’ he tells Calum McCrae.

Thirty years ago today Michael O’Brien, Ellis Sherwood and Darren Hall were wrongfully convicted of the brutal murder of Cardiff Newsagent, Phillip Saunders. They ultimately served 11 years and 43 days before their convictions were quashed in 1999. Three decades might have passed but the pain caused by that shocking miscarriage of justice remains undiminished.

At 19 years of age, Michael O’Brien had a steady job, a wife and a child with another on the way. A self-described ‘petty criminal’, he was out one night in a stolen car. ‘Most of my friends were on the dole, smoking ganja and stealing cars. To fit in, sometimes you have to do things you don’t wanna do. That cost me dearly.’

That night, Phillip Saunders was murdered. O’Brien, Sherwood and Hall were brought in as part of the investigation. They would be charged with murder and put on remand. ‘It wasn’t just dealing with being wrongly accused; but I had to deal with the fact that my wife was heavily pregnant and I wasn’t gonna be there at the birth.’

His wife gave birth to a baby girl but things were to take a tragic turn. ‘Just before trial, my daughter died of cot death. I was just devastated and I was in no fit state to go to trial. My mental health deteriorated really badly. My wife walked out on me.’

Some officers taunted O’Brien: ‘I was sexually assaulted when I was 17, they were the same officers who investigated that and they were telling me that I would get bent over and shagged in prison. Really horrible stuff.’

‘Before this I trusted the police,’ he continued. ‘I thought that this would be sorted out at trial. I never thought I would get found guilty.’ 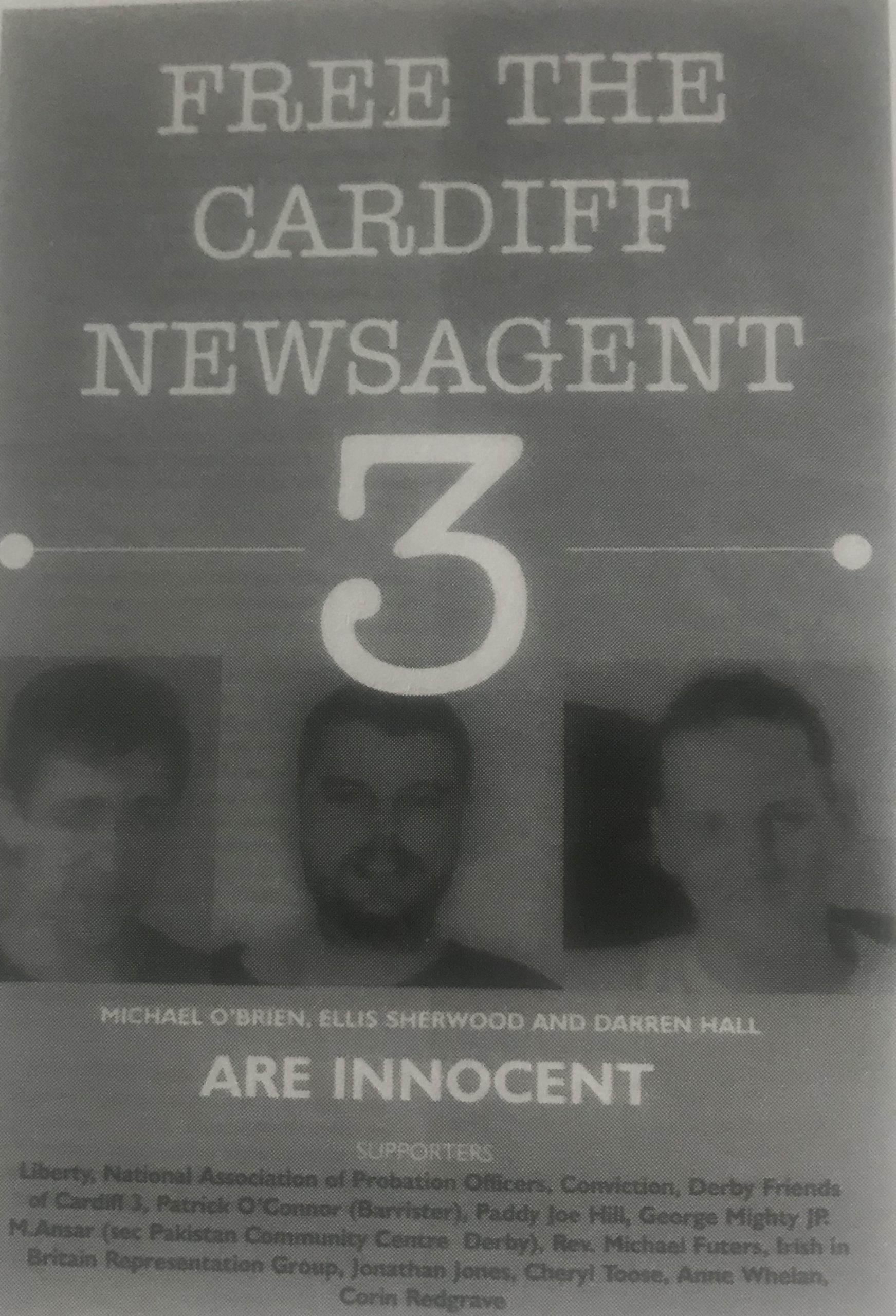 ‘Free the Cardiff Newsagent 3’
The outlook was bleak for his trial too. One of his co-accused, Darren Hall, had confessed to being involved, and implicated the other two. A South Wales police officer, Stuart Lewis, also claimed he overheard a conversation between two of three defendants admitting their parts in the murder.

I asked O’Brien about the moment the foreman of the jury came back with a guilty verdict. ‘I was absolutely numb. I started to cry and was holding onto the rail. I turned to my father and said: ‘As long as you know I didn’t do it, that’s all that matters’.’

Experts testified at the Court of Appeal years later that Hall’s confession was unreliable as it was influenced by a combination of a previously undiagnosed personality disorder and police pressure. It would be reported that the police had breached PACE (the Police and Criminal Evidence Act) some 115 times in their questioning of the suspects.

The three men were handcuffed to hot radiators, denied food, water and access to lawyers.

O’Brien always maintained that the cell ‘confession’ was fabricated by detective inspector Lewis. The Court of Appeal held that, in light of questionable note-taking in a previous case and the misconduct during interviews, his account was suspicious and was liable for a second cross-examination.

And two witnesses claimed they lied in giving evidence against the three defendants as a direct result of police pressure.

O’Brien was suffering from the trauma years before that evidence was put back to court. ‘I used to feel suicidal. I still do now, even though I’m a free man. But what I didn’t know at the time was I was suffering from PTSD.’ He often believed it was all a nightmare. ‘When I realised it wasn’t, it really freaked me out. I jumped off the bed, I was so irate. I was so tense. It was such an awful feeling in my stomach, knowing that I was doing a life sentence for somebody else’s crime. What can be worse than that?’

O’Brien felt he was being punished for maintaining his innocence. He challenged attempts by prison authorities to ban him speaking to journalists. As a result of the interest of a BBC programme (the case featured in Week In, Week Out) the miscarriage of justice watchdog, the Criminal Cases Review Commission reinvestigated the men’s case. ‘If I hadn’t have taken them to court, the BBC programme wouldn’t have been made and we wouldn’t have had our names cleared,’ O’Brien recalled. ‘They told me at one stage that if I continued protesting my innocence then I would die in prison. I said: ‘So be it.’ I was either leaving there in a box or as an innocent man.’

Michael O Brien in an interview with the BBC

Bail was granted for the ‘Cardiff Newsagent Three’ when the evidence they found was put to Court.  ‘I was on top of the world. For the first time in 11 and a half years I was to spend Christmas with my family and kid. I can remember it as clear as day. I stayed up with my son all night. He was 13 at the time and came and gave me a cwtch (hug) on my bed and we fell asleep together.’

O’Brien was not the same as the 19-year-old that was convicted all those years ago. And the world he came out to was a very different place. ‘I couldn’t get to grips with the fact that my sisters had kids of their own. They were only eight when I went in and they had grown to be adults.’ He speaks of the pain of watching his son grow up via occasional prison visits.

On release he was handed a mobile phone to do some radio interviews. ‘I couldn’t get to grips with it. They had to work it for me.’ He struggled with a microwave. ‘I ended up eating a frozen pasty because I couldn’t work the machine. Things most people took for granted, I found really difficult.’

Large crowds of people induced panic attacks. He’d wake every hour in bed and pace round his room as if it were still a cell. ‘It didn’t dawn on me straight away that I was free. I thought I was hallucinating. I had to pinch myself to see that it was real. It really does affect you. I don’t think people really appreciate that.’

Life after prison has had its ups and downs for Michael O’Brien. He has become a campaigner highlighting miscarriages of justice, supporting Paddy Hill’s MOJO (Miscarriage of Justice Organisation Scotland) group as well as writing books about his own fight to clear his name including The Death of Justice.

He has also had to endure the shattering experience of losing a second child in 2012. Dylan O’Brien died of an undiagnosed metabolic condition at the age of two. Instead of holding onto anger, however, Michael O’Brien, along with Dylan’s mother, decided to use his memory to raise awareness and help others. ‘We set up a charity, the Dylan O’Brien Foundation. We are only very small, but we supply life-saving machines to hospitals. If we’d have had one with Dylan, he would have still been alive.’ You can make a donation here.

Some bad decisions with money and relationships have now left O’Brien homeless and relying on friends. In spite of everything, he remains positive. ‘I have realised there are more important things, like my children. I’m left with my clothes and what I stand in. But I’m gonna get myself back on my feet. I’m down at the moment, but I’m certainly not out.’

You can make a donation to the the Dylan O’Brien Foundation here.

Michael Weir: ‘the first convicted man to be…
Miscarriage of Justice watchdog chair dismisses…
Episode 3: ‘People are coming together. It’s…
UNJUST PODCAST: Interview with Justin Brooks of the…
Episode 6: 'It was a political trial - start to finish'