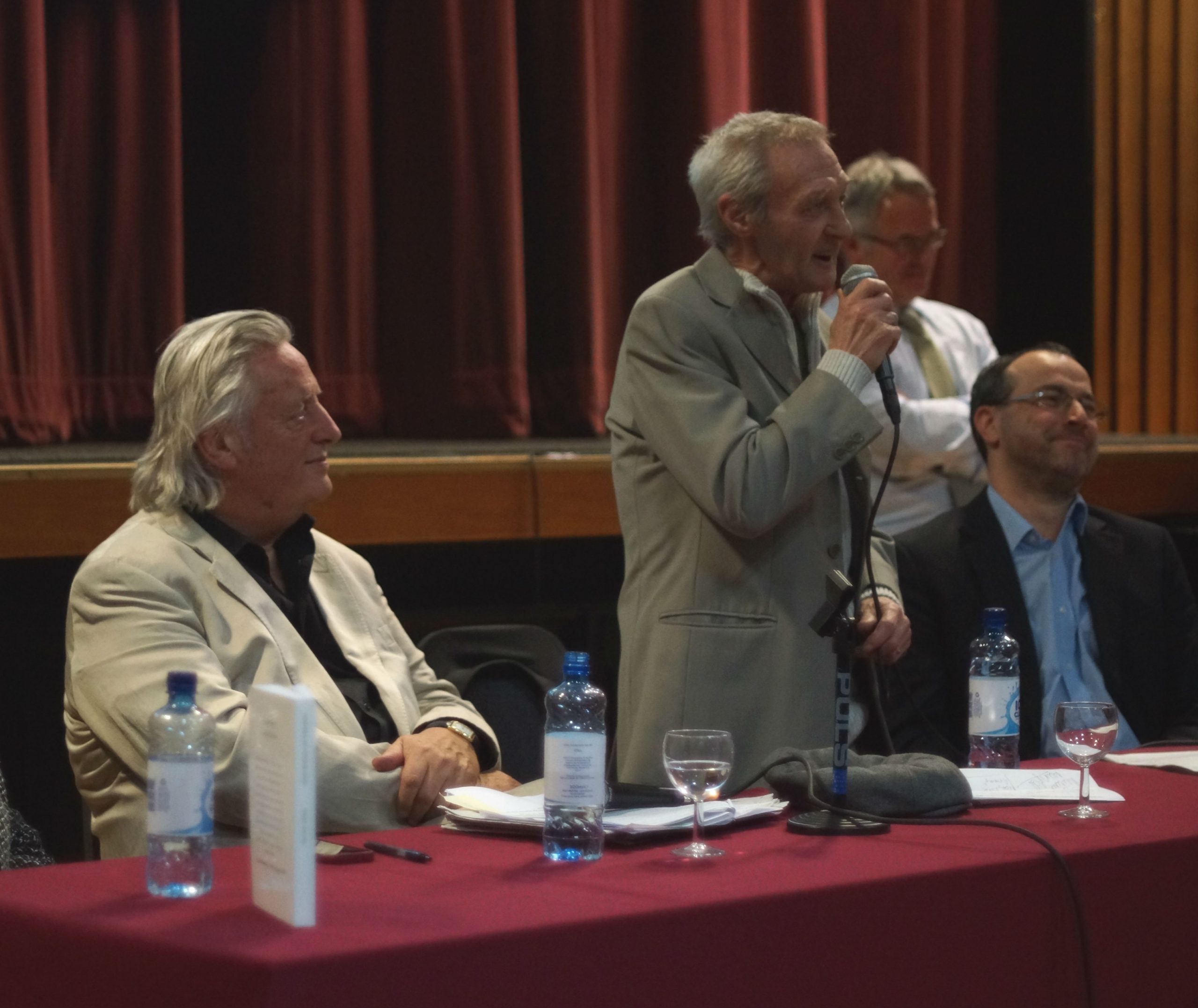 Paddy Hill, one of the Birmingham Six, speaking at the lecture 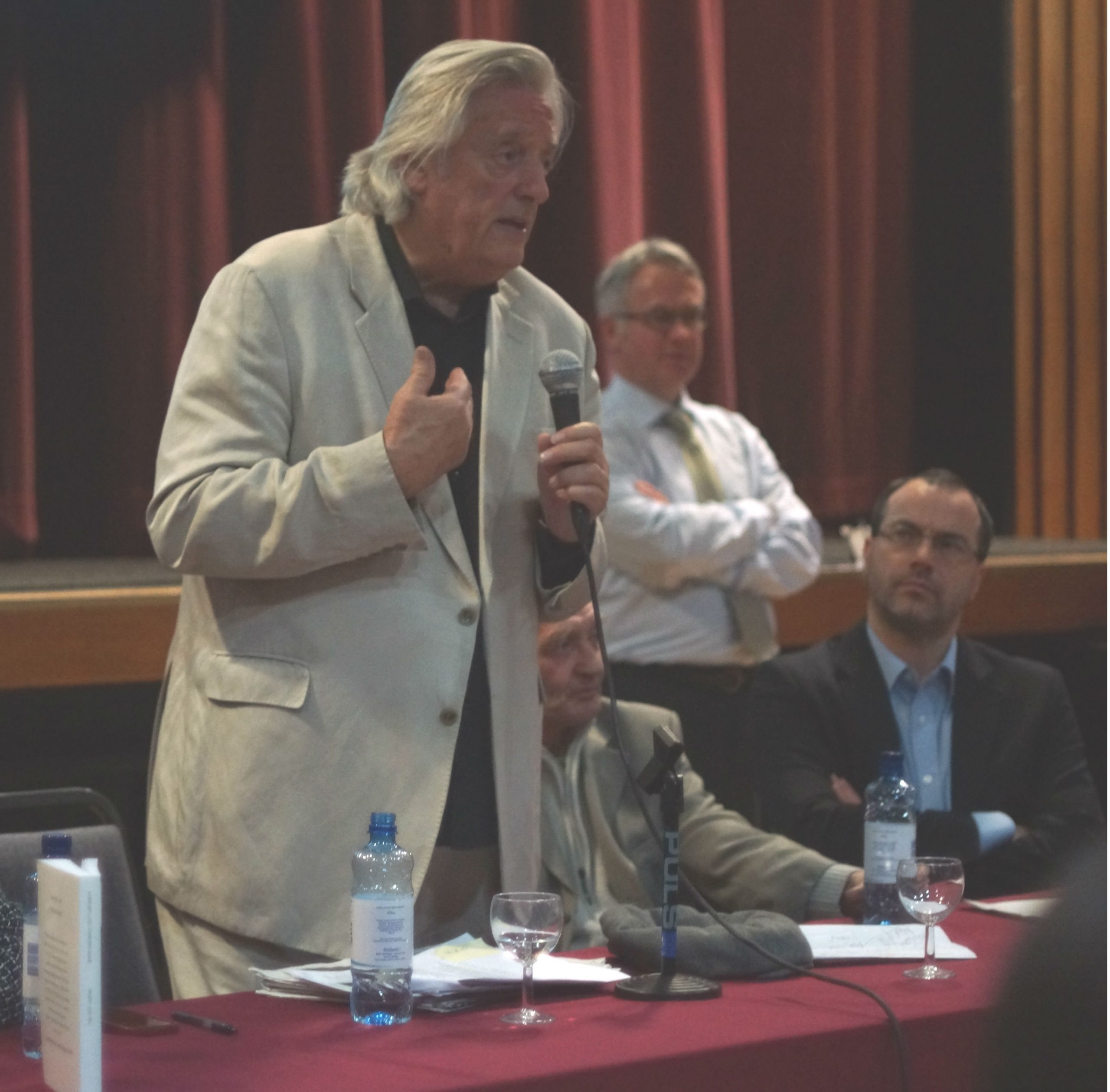 We live in a system which ‘at its heart has collusion’, said the radical human rights lawyer Michael Mansfield QC to a packed auditorium at St. Mary’s College in Belfast last week. ‘Collusion between higher politics, the upper echelons of the police, and the media.’  Mansfield was delivering the first annual Gerry Conlon memorial lecture, entitled ‘Democratic Bankruptcy’, just metres from where Conlon had grown up on the lower Falls Road.

The human rights lawyer paid tribute to Conlon who, along with three others, was wrongly imprisoned for 15 years for an IRA bomb attack in Guildford in 1974. Following his release from prison in 1989, Conlon campaigned tirelessly for the rights of other victims of miscarriages of justice, including the Birmingham Six. He died of lung cancer last year at the age of 60.

Mansfield illustrated the momentous impact that Conlon and his comrades had delivered with their successful fight for justice by listing subsequent cases where the marginalised had taken ‘mental sustenance from what had gone before.’ Examples included the families of the victims of the Marchioness disaster in the Thames, where ‘50 people died because of corporate greed,’ but the resolute demand of the families for an inquiry resulted in changes to safety standards, and the family of Stephen Lawrence, whose perseverance led to two convictions for the murder of their son almost 20 years after his death. ‘They recognised, just like Paddy Hill  [of the Birmingham Six] and Gerry Conlon did, that the battle isn’t over when you’re out; that’s when it’s just beginning,’ said Mansfield. Doreen Lawrence, now a Life peer in the House of Lords, regularly summons senior politicians and police chiefs to public hearings where they are asked how many of the latest recommendations to improve accountability have been implemented. ‘And they all turn up, because they’re worried about votes of course,’ said Mansfield. ‘And she’s got the moral high ground.’

Mansfield also cited the Saville inquiry into Bloody Sunday, which found that British paratroopers had fired first, had shot fleeing civilians, and had concocted lies to cover their actions. ‘I was in Derry the day (the Report) was broadcast – and I’m not particularly religious but for me it was spiritual,’ said Mansfield. ‘The whole place erupted.’ The barrister said that the key word was ‘accountability’, which is exactly what Conlon and Hill had fought for, what the families of those murdered on Bloody Sunday had fought for, and the absence of which was the reason for the lecture’s title.

Mansfield read Conlon’s open letter to President Obama, when he spoke out against Shaker Aamer’s detention and Guantanamo Bay, which Mansfield linked to the continued abuse of the legal system and government power to cover atrocities. He cited the Chilcot Inquiry as an example, and added that the child abuse scandal has been ‘another case where the families have had to set the agenda’ with the government stalling. Chairs of inquiries have been appointed and then forced to stand down because of conflicts of interest.

Responding to an audience member who asked what the point of inquiries is, given that ‘inquiry members are all highly paid and all we get is an apology’, Mansfield said that there are longer term benefits that may not be immediately apparent. ‘Those in power don’t want inquiries that expose them. That’s why they passed the Inquiries Act in 2005,’ he said. ‘But you’re doing this for future generations. The next generation of politicians knows this – you’re setting a democratic precedent with these inquiries.’

Mansfield ended on a positive note, noting that ‘where the system refuses to rectify its own mistakes,’ people’s tribunals have

Paddy Hill, one of the Birmingham Six, speaking at the lecture

emerged to challenge abuses, as with the ongoing Russell Tribunal on Palestine, where Mansfield sits as a member of the jury, which is assessing whether Israel’s military has committed war crimes. A similar tribunal was set up by Iranian émigrés in London, in the face of the regime and the international legal system’s failures to account for massacres and mass burials in 1980s Iran. Another inspiring example, according to Mansfield, is the campaign to save ‘one of the most successful hospitals in the UK, in Lewisham’ from closure by Health Minister Jeremy Hunt, where 25,000 took to the streets in protest. The proposal to cut had ‘nothing to do with performance, everything to do with the private finance initiative’, he said, and wider legislation mandating further privatisation of the NHS was a result of ‘nearly 200 members of the Houses of Parliament’ having ‘their fingers in the private pie.’ ‘I think it’s what we would call in the law a conflict of interest,’ added Mansfield.

‘I’d give my right arm to have Gerry back,’ said Paddy Hill at the memorial lecture, as he reminisced about the pair’s friendship. ‘I met him in prison and had heard he was a right bollocks,’ he joked. Like Conlon, Hill was wrongfully imprisoned along with five others in 1974 for planting an IRA bomb in Birmingham. His conviction was overturned in 1991, after he had spent some 16 years in prison as an innocent man.

Much to the delight of the audience, Conlon and Hill’s time in prison was illuminated through Hill’s stories and anecdotes, but Hill ended on a sombre tone: ‘We have nothing to be guilty about, but we feel so guilty about what happened to our families.’ Conlon felt particularly guilty because of ‘what happened to his dad Giuseppe’, said Hill. Giuseppe Conlon died in prison after his health deteriorated, exactly (and apparently coincidentally) 25 years before the memorial lecture took place last week. ‘When Gerry died, thankfully that burden of guilt was lifted off his shoulders,’ concluded Hill. ‘And he’s now at peace.’

Jack McGinn is a translator with a Masters in Arabic, and writer with an interest in the Middle East.

Our print magazine is Proof. Contributors include Michael Mansfield QC, Bob Woffinden, David Rose, Eric Allison and Ian Cobain.
Buy Proof Magazine
The latest issue (Why legal aid matters) includes Helena Kennedy QC and Martha Spurrier in conversation, David Conn on the legacy of Hillsborough - plus how to build your own law centre.
Jack McGinn is a translator with a Masters in Arabic, and writer with an interest in the Middle East.