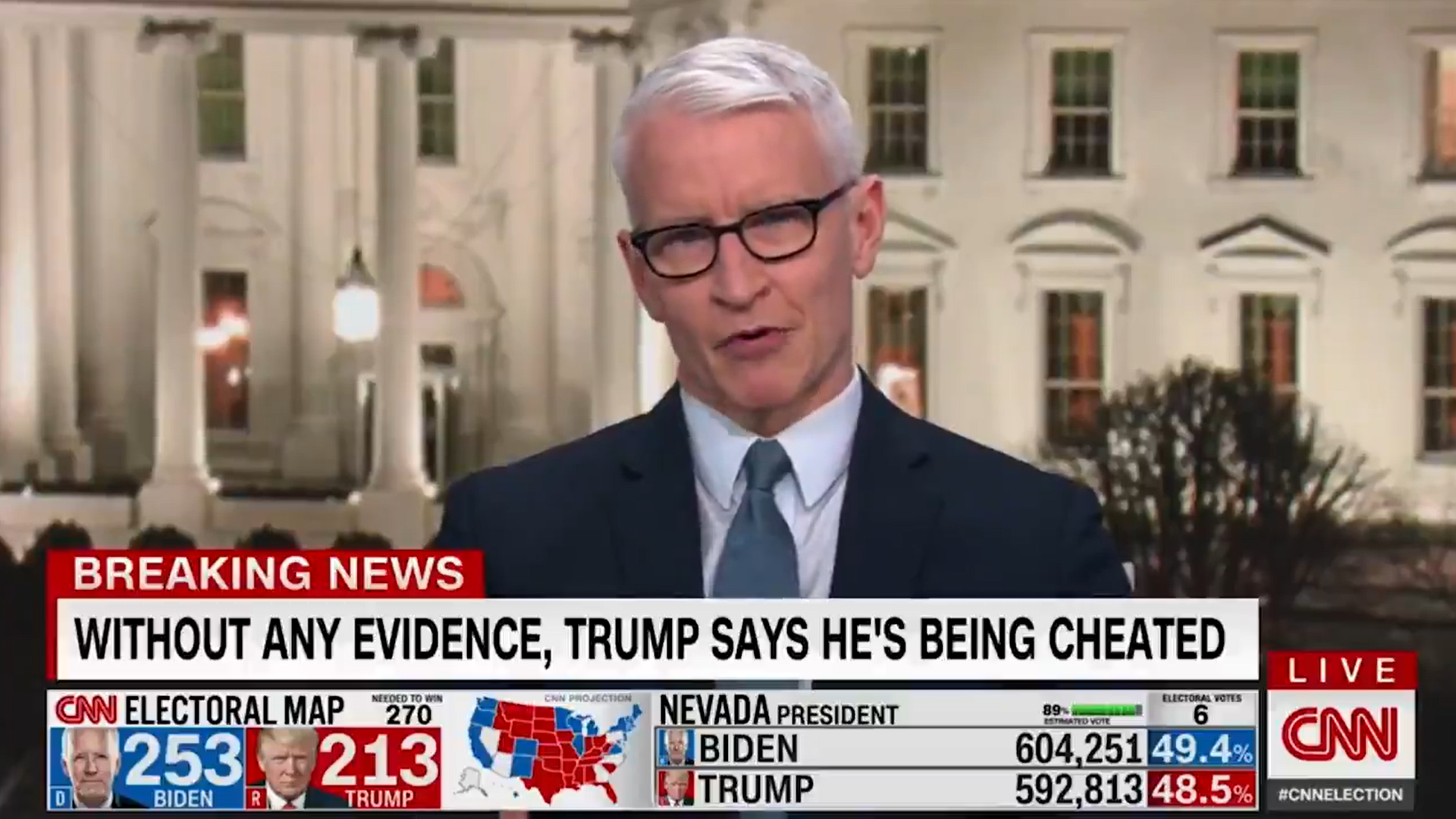 As the American nation, and much of the rest of the world, continues to stare glassy-eyed at Wolf Blitzer on CNN, desperate for the broadcasters to call Pennsylvania, Georgia, or whatever motley mix of states will return 100 Pennsylvania Avenue to the Democrats, Trump’s lawyers have already taken up residency in the state courts.

Across every closely contested state, claims have been filed challenging the electoral count, with embarrassingly little regard for internal consistency. In some states, the aim is to stop the count, as in Nevada and Michigan, while in others, such as Wisconsin, lawyers seek the opposite, asking for a recount or for the count to continue. Shameless opportunism is the only way that one of these claims may succeed, and given shame has never been a discernible characteristic among Trump and his base, it is unlikely to stop them now.

There is almost no doubt that every one of these claims is farcical. In all the cases where the Republican lawyers are submitting arguments to stop the count, state officials are still counting the votes from Election Day. This is not a case of late arriving postal ballots, or ballots filed after Election Day, but a case of officials simply needing to the count the votes that were in situ on the 3rd November. So far, the state courts have repeatedly smacked the President’s lawyers around the face with this reality, asking for evidence of the ostensible fraud and being met with a shrug of the shoulders.

Trump’s humiliating excursion onto national television on Thursday night essentially summed up the argument his lawyers have had to make, which is that votes for Joe Biden shouldn’t count because they are votes for Biden. The President might have done his level best to impose autocracy on the United States over the last four years, but even he and Bill Barr, the US Attorney General, have not managed to eviscerate the foundational element of the US Constitution – a president chosen by the people.

Despite Trump’s fascist language on Thursday night, it was not delivered with his usual bombast, but in a listless monotone, in the vein of a gambler who knows the game is up, but is going to try one last spin of the wheel.

His sons conveyed a greater sense of panic, with Donald Trump Jr’s call to arms on twitter exactly what you would expect of a petulant man-child who can hear the clanging of a prison door in his dreams. Should this reduced President Trump be the one that continues to broadcast from the White House, his threat is extinguished. His base thrives on his energy, an energy that belies his years, and his rallies over the final weeks of the campaign showed that there are plenty of amped and ammoed up Americans who are willing to support him to the hilt. But without any electrified denial of reality and call to arms from their iniquitous idol, this group will remain inert, eventually taking their inane mutterings about QAnon, Fox News’ betrayal, and the deep state’s interference in the election back into the rural ignominy of the deep south where it belongs.

But, should Trump re-energise himself, perhaps by finding a single court willing to offer a sympathetic ear to his claims of corruption and calumny, his threat will resurge. If this election has taught us anything, it is that you can be a xenophobic, corrupt, incompetent narcissist, who achieves nothing over four years but self-promotion, and who pursues policies that divide families, enrich billionaires and kill Americans, all while making America a laughing-stock on the world stage, and at the end of those four years still win the vote of almost half of the American people. Given his need to win by any means possible, and the very real reality that losing the White House could result in his bankruptcy and imprisonment, it would be surprising if Trump did not soon return to his bombastic self, pushing his conspiracy theories from the White House podium while appealing a case on and on through the state and federal courts, eventually reaching the US Supreme Court.

The Supreme Court has long been predicted to be the ultimate arbiter of this election. Even though it has only ever been involved in deciding a presidential election once before, in 2000’s Bush v Gore case, the Republicans’ language before this election made it almost sound as though every presidential election inexorably made its way to the echoing halls of the Court. After all, the reason for pushing Amy Coney Barrett onto the Bench with unseemly haste was so that there would be nine justices on the court to hear any electoral controversy- and, presumptively, that at least three of them would be cast-iron certainties to vote for Trump because they owe their place on the bench to him.

Should a case reach the Supreme Court, Democrats would be justified in looking on in horror. Despite no sustainable legal case having (yet) emerged, as Kim Wehle has written for The Atlantic, it’s not unreasonable for liberals to view the Court with scepticism. As well as the three Trump appointees (Coney Barrett, Neil Gorsuch and Brett Kavanaugh), the Supreme Court contains another three justices put in place by Republican presidents, giving them a 6-3 majority. In Bush v Gore, the Court split precisely along ideological lines, with the five conservative justices delivering a juridically questionable decision, seemingly handing the contest to George Bush on the basis of politics, not law. Should history repeat itself, we would see another Republican President appointed in defiance of the popular vote by virtue of politicians in robes.

But at the same time, such a case could put the issue of Trump to bed once and for all, confining the nightmare of his presidency to the peoples’ dreams, not their reality. While the Supreme Court may have partisan leanings, it is not as corrupted as Mitch McConnell’s Senate, and most of the justices are not entirely unmoored from their judicial oath to ‘administer justice without respect to persons..’. Clarence Thomas and Samuel Alito, two of the Court’s more unhinged conservatives, would admittedly be more likely than not to vote for even the most vapid argument put forward by Trump’s lawyers, as would Brett Kavanaugh, whose dissent in a recent election case exposed his partisan sympathies. However, Chief Justice John Roberts is an ardent institutionalist, and does not want to go down in history in the same fashion as Roger Taney, the reviled Chief Justice who upheld the constitutionality of slavery in Dredd Scott, and pushed America further down the path to civil war in the 1800s.

Similarly, Neil Gorsuch has proven to be independent-minded, voting contrary to Republican expectations in a recent LGBT case, and those two alone, coupled with the three remaining liberal justices, could put an end to Trump’s ambitions of a second presidential term. The newest justice, Amy Coney Barrett remains the joker in the pack, but if the Court majority is already lined up against the President, it would be peculiar for her to blot her copybook so soon, and for so little reward.

For anyone who wants to see Trump and his acolytes dragged off the national stage, this could be the best option. A Supreme Court packed with Trump appointees that refused to hear an appeal, or who dismissed the arguments of his lawyers, would be difficult to frame as part of the anti-Trump establishment. Trump has spent too much time extolling the virtues of the justices he put on the Supreme Court to then turn on a dime and denigrate them as corrupt members of the liberal cabal. Some of his most ardent acolytes might remain, but for most this would be a bridge too far.

Without the Supreme Court dismissing Trump, he and his arguments will probably persist, with his claims of electoral fraud reverberating America’s political discourse for the foreseeable future- certainly until Inauguration Day on January 20th. Such accusations may be like the buzzing of flies around an elephant’s head, but they may also provide Trump with the cause he needs to stay relevant, enlivening his base and sustaining him for another run at the presidency in 2024. After all, this election has shown the Republicans that Trumpism has real roots in America, and if Trump is still on the national stage in three years, it wouldn’t be surprising to see them choose him as their presidential nominee once more.

In the UK, the decisions of the UK Supreme Court in Miller I, on exiting the EU, and in Miller II, on the prorogation, settled the matter definitively for most people. Had Theresa May sent the Article 50 letter without a parliamentary vote, instead initiating the UK’s departure from the EU via prime ministerial fiat, questions may well have lingered over the legitimacy of the UK’s exit, and the case may have been similar with Johnson and the prorogation. America may not be facing an exact parallel, but the two democracies have spent much of the last five years in some form of harmony. Democracy in America is still vulnerable, but a decision of the Supreme Court that both defies its ideological leanings and asserts the people’s choice could help pull it back from the brink.