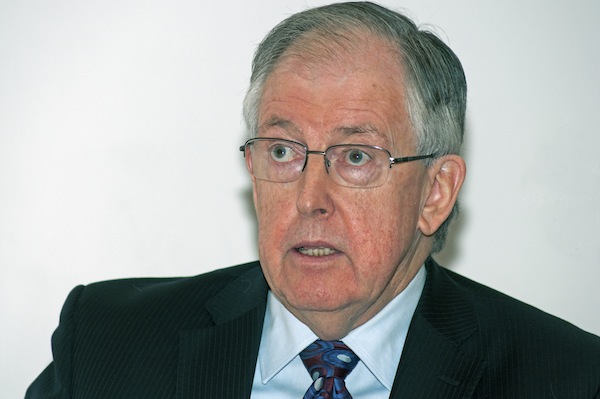 12.10.2012: Photography of LAPG Annual Conference 2012 ‘LEGAL AID: POST LASPO’. School of Oriental and African Studies, Thornhaugh Street, London WC1H 0XG. © Copyright:Robert Aberman - Photographer Tel/Fax: +44 (0)20 7263 7899 Mobile: +44 (0)7970 185 838 Email: robert@robertaberman.co.uk © Copyright: Robert Aberman - Photographer All images are copyright of Robert Aberman. They are licensed to the client for uses specified only, and by named client only. Other use must be agreed in writing and may be subject to an additional fee. All reproductions of this photograph must be credited. Moral rights are asserted in accordance with the Copyright, Designs & Patents Act 1988.

If access to justice campaigners had thought Shailesh Vara MP, the former minister for legal aid, would express any regret about the impact of the cuts to legal aid now that he is free from the constraints of collective ministerial responsibility, we were sadly mistaken. Speaking to an event organised by the free market think tank Politeia last week, Vara repeated the now customary Ministry of Justice mantra that ‘the legal aid budget remains one of the most generous in the world’.

Vara began by setting the scene for the cuts made by the Coalition government through the Legal Aid, Sentencing and Punishment of Offenders Act 2012 (LASPO): ‘The backdrop to the cuts was the UK’s desperate economic position’ when the government took office, and ‘had Labour got into power, they too would have made cuts’. Indeed, he reminded the audience that as recently as January 2015 the then-Labour shadow justice secretary Sadiq Khan told the Guardian ‘I don’t have a magic wand to wave. I can’t commit to reverse the £600m cuts to legal aid made by the Tories and Lib Dems.’

For Vara, therefore, ‘the need to cut the legal aid budget was and is recognised across the political divide’. If that was true during the last parliament, it does not account for the change in leadership of the Labour Party, or indeed of the Liberal Democrats, whose conference this week passed a motion of regret at the ‘dramatic and disproportionate’ cuts to legal aid made by the Coalition.

However, the Lib Dems’ apparent enthusiasm to disown this aspect of their legacy in government is evidently not shared by their former justice minister Lord Tom McNally, who piloted LASPO through the House of Lords. McNally rose from his position as a member of the audience at the Politeia event to declare that ‘bandying about the term “access to justice”’ was ‘really quite fraudulent’.

In his ‘plea to all the lawyers’, McNally said ‘to govern is to choose’, and that while he wants a review of LASPO, ‘the legal profession has got to look at itself and see how it can contribute’. McNally’s favoured option would be a joint committee of both houses of parliament undertaking such a review of the cuts. Opting to end with some unsolicited words of advice, McNally said that ‘seeing lawyers outside the Ministry of Justice looking like 1970s trade unionists doesn’t help the state of the profession or the situation’.

Prior to McNally’s intervention from the floor, Vara acknowledged that it is ‘not unreasonable to ask for a review [of LASPO], but it is important that people give the Act some time to bed in’. He reaffirmed the government’s commitment to review the impact of LASPO three to five years after its implementation (it has now been almost three and a half years since LASPO came into force). Nevertheless, the former legal aid minister maintained that a ‘culture change’ is needed, away from a litigious ‘I’ll see you in court’ attitude and towards greater use of mediation.

Vara also confirmed that he remains supportive of the proposed residence test for civil legal aid, which would deny publicly-funded legal advice and representation in non-criminal cases to people who cannot prove that they have been lawfully resident in the UK for at least 12 months. Noting that the introduction of the residence test ‘has somewhat stalled because of legal action’ – that is, the successful appeal to the Supreme Court brought by Public Law Project – Vara said ‘personally I have no problem with the residence test’ and presented his defence of the principles behind this discriminatory reform:

Joining the former minister on the panel was Hugh Barrett, the outgoing director of legal aid commissioning and strategy at the Legal Aid Agency. Barrett told the audience that Vara was ‘one of the kindest ministers [he] ever worked with’; this because the minister had offered the civil servant a chocolate biscuit during their first meeting. After providing an overview of the history of the modern legal aid scheme and its administration, Barrett explained how the legal aid budget was cut by LASPO – primarily through drastic reductions to the scope of public funding.

Legal aid lawyers will no doubt endorse Barrett’s declaration that ‘legal aid is a key element of the justice system underpinning the principles we live by’. There may, however, be scepticism, amusement and even exasperation at his assertion that increased online working ‘has been popular’, given the persistent problems practitioners have faced with the client and cost management system introduced by the Legal Aid Agency in 2013.

Ultimately, it was left to Peter Crisp, the dean of BPP Law School (which hosted the event) to provide a counterbalance to views from the now-departed inhabitants of 102 Petty France, the building which houses both the Ministry of Justice and the Legal Aid Agency. Crisp announced that ‘the consequences of LASPO have come home to roost’ and that ‘rights are meaningless unless they can be enforced’. Quoting the late Lord Bingham, Crisp concluded that ‘denial of access to justice to the poor litigant is the enemy of the rule of law’.

Up to one million people living in housing legal aid…
Theresa May to 'simplify' funding for inquests
Victims of trafficking failed as a result of legal…
LASPO cuts are a 'false economy', say MPs
Election 2019: Opposition parties' manifestos compared