The plot line in Holby City starts with a trip to an awards ceremony.  The hospital CEO is driving in one car with Antoine Malick (self confident consultant) riding in the front seat.  The other car is driven by F2 Arthur who is accompanied by his (unrequited) love interest Chantelle. 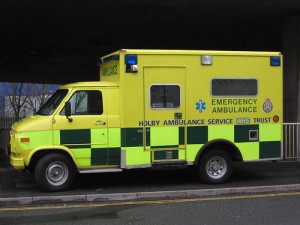 Arthur, intent on declaring his true feelings, takes a diversion, with his mind on Chantelle rather than what he is doing.  He rounds the corner to be faced with a lorry, static in the centre of the road with its load partially shed.  He brakes but can’t avoid crashing.

Chantelle is unconscious but more worrying is the sight of an unsecured hay bale about to fall onto the car.  Antoine, from the other car rushes to Chantelle’s aid and in freeing her is trapped by the falling hay bale.  Arthur then pulls him free but in doing so, Antoine right hand is severed.

It’s a fictional story but one that creates the opportunity to consider the law in action:

Liability – often quoted, but a driver has a responsibility to drive in a manner consistent with the road conditions.  Concentrating on the road ahead, rather than a passenger, is likely to mean that Arthur has a part to play in causing the accident.  So too could the driver of the lorry.  It’s not clear why the driver stopped but it caused an obstruction on a blind bend and has, what appears to be an unstable load. Detailed investigations would be necessary to apportion liability.  It may not be straight forward and Arthur may be ‘contributory negligent’ because his lack of attention contributed to the accident.

Causation – the consequences unravel from the incident itself.  There is clear evidence of peril and individuals taking action in the heat of the moment.  Antoine’s injury occurred because he had gone to assist.  Arthur’s decision to pull him clear to prevent injury has lead to a catastrophic life-changing outcome.  These activities all flow from the original negligent act(s).  There doesn’t appear to be a break in the chain of causation which would separate the events leading to injury from the original cause.

Quantum – Chantelle’s head injury is immediately life threatening but, in the manner of TV, she appears quickly fixed and back to work.  Head injuries are complex and require sound clinical evidence about future risks.  Consideration around future complications or the risk of epilepsy will assist with the valuation of the injury. Antoine’s injuries could change the fundamental core of what he is. His hand is re-attached and his physiotherapy has started but he is in a clear state of denial about the consequences.  He believes he will fully recover and return to surgery yet the odds are massively against the full use of the hand returning.  The chances of him returning to work as a surgeon are not framed but the view is that it is unlikely.  His special damages claim (the non-injury aspects) will be determined by the final prognosis but is likely to include loss of earnings based on his ability to work in the future along with loss of opportunity. This will be calculated by considering evidence of his career path to date, his likely career progression and income opportunities alongside the work and income opportunities he is able to achieve.

Running through the storyline leading from the crash are snippets of psychological injury, flash-backs, a sense of hopelessness, confusion and vulnerability.  In the most recent of episodes Chantelle leaves her job because the accident and consequences (along with her personal relationship) have changed so much of her life, Arthur is struggling with overwhelming feelings of guilt and Antoine appears on the verge of a nervous breakdown.

A great storyline, packed with drama, but giving a glimpse into the complexities of life post accident; individuals cope differently and recovery post accident can be constrained by the emotional and the physical.  All of these significant issues will be wrapped up into a claim for compensation.  The aim of the compensatory system is to put the individual back into the position ‘but for the accident’.  With injuries such as this, returning to the status quo pre-accident often cannot be achieved.  The compensation system and the use of rehabilitation and other therapies will attempt to do this through the identification of loss and future needs.

Barbara Hamilton-Bruce is a Fellow of the Chartered Institute of Legal Executives and Head of Operations at Quindell Legal Services Limited, an SRA authorised ABS. She has over 20 years' experience in the personal injury sector mainly acting for claimants.

Our print magazine is Proof. Contributors include Michael Mansfield QC, Bob Woffinden, David Rose, Eric Allison and Ian Cobain.
Buy Proof Magazine
The latest issue (Why legal aid matters) includes Helena Kennedy QC and Martha Spurrier in conversation, David Conn on the legacy of Hillsborough - plus how to build your own law centre.
Barbara Hamilton-Bruce is a Fellow of the Chartered Institute of Legal Executives and Head of Operations at Quindell Legal Services Limited, an SRA authorised ABS. She has over 20 years' experience in the personal injury sector mainly acting for claimants.