‘Law without justice is like a body without a soul. It’s a dead letter’

‘Law without justice is like a body without a soul. It’s a dead letter’

Hundreds of lawyers, trade unionists and campaigners gathered outside Parliament on Monday afternoon in defence of the legacy of Magna Carta and to highlight the hypocrisy of the government’s three-day event to mark the 800th anniversary of the historic document, the Global Law Summit.

‘Not the Global Law Summit’, organised by the Justice Alliance, marked the end of a three day ‘Relay for Rights’, during which campaigners walked 42 miles from Runnymede, where Magna Carta was sealed in 1215, to Westminster. 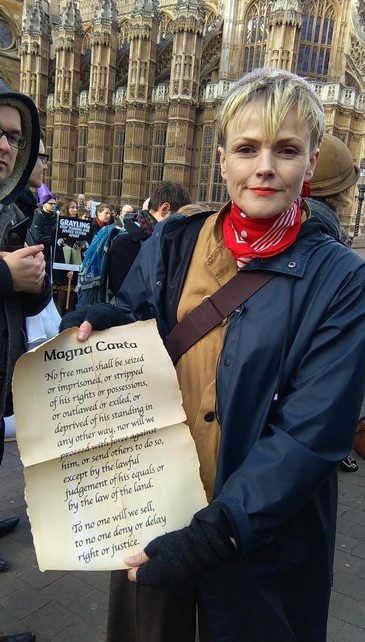 Maxine Peake ‘sticking it to that lot over there’

A letter from actor Emma Thompson was read out at the demo, in which she called on ‘all those with any interest in access to justice’ to support the alternative Magna Carta celebrations, Not The Global Law Summit. Unlike the government’s event, the protest promotes the principles of Magna Carta – open justice for all and equal access to the courts and lawyers, said the letter from Thompson.

The star of legal television drama ‘Silk’, Maxine Peake, also made an appearance, telling the rally she was ‘honoured to be here to help you continue to stick it to that lot over there’, as she pointed towards the Queen Elizabeth II conference centre, where the government’s £1700-a-ticket Global Law Summit is being held.

Since its announcement last year, the Summit – launched by Lord Chancellor and Secretary of State for Justice, Chris Grayling – has attracted criticism from the legal aid profession because of its commercial focus, at a time when the Government is making ongoing cuts to legal aid.

Peake read out some of the most famous clauses from the historic charter to the rally, with the words ‘To no one will we sell, to no one deny or delay right or justice’ sparking applause from the protestors.

Sick joke
‘That Summit over there is a sham; it’s a sick joke,’ Justice Alliance co-founder Matt Foot told the rally. ‘The only way to celebrate the anniversary of Magna Carta is to get rid of Chris Grayling,’ he said.

Foot pointed out that the first person to speak in support of the Justice Alliance campaign against the legal aid cuts when it launched in 2013 was Gerry Conlon, who sadly died last year. Miscarriage of justice victims Paddy Hill, Patrick Maguire and Raphael Rowe have since spoken at subsequent rallies against legal aid cuts because, according to Foot: ‘They know, if these further cuts to the criminal legal aid budget come through, others will follow and suffer the same misery that they had to suffer.’

Foot called on attendees, in honour of Conlon, to carry on the fight to save the justice system, and prevent further miscarriages of justice. 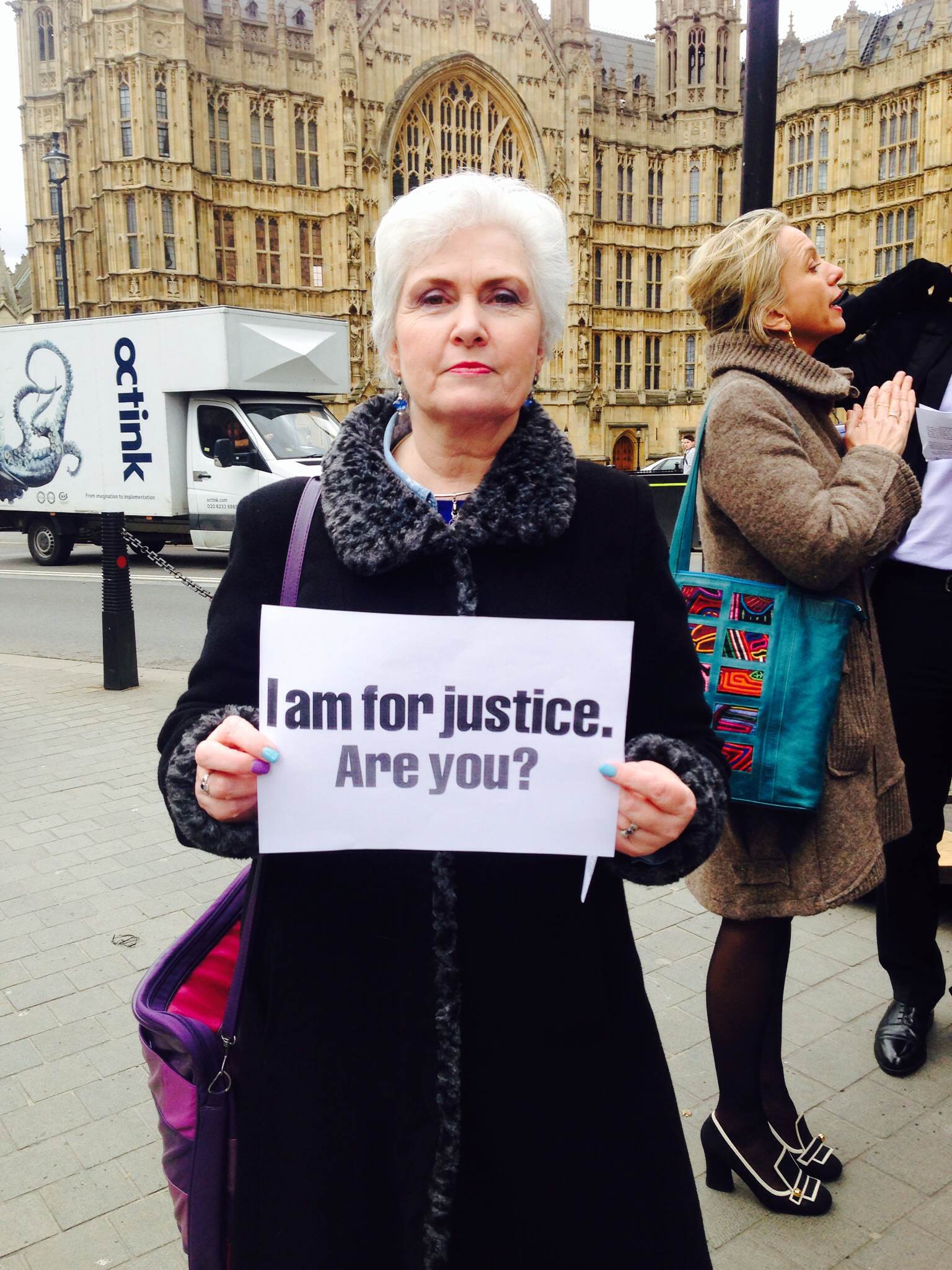 Michelle Bates, whose brother Barry George was wrongly convicted of the murder of TV presenter Jill Dando, echoed Foot’s sentiments, warning that: ‘without legal aid, many more innocent people will be wrongly imprisoned’.

‘It is a complete farce. Compensation for these men would cost a fraction of what the Global Law Summit is costing the Government to host. Mr Grayling, your title is Right Honourable but I see nothing honourable in your deeds.’ 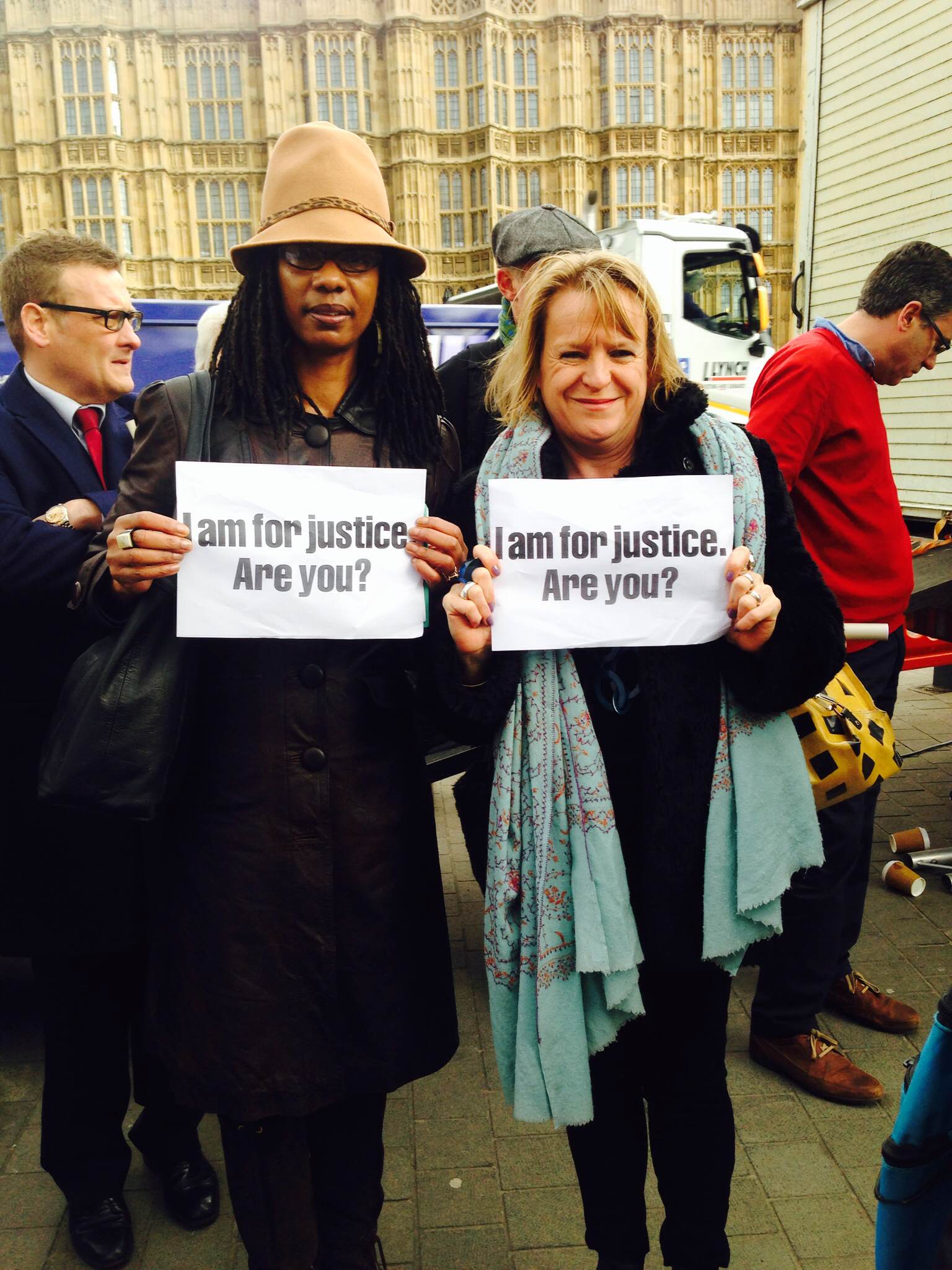 Marcia Rigg, who set up the ‘Justice and Change’ campaign after her brother Sean Rigg died in police custody, told the rally that her family had been asked to contribute £21,000 to legal fees for their brother’s inquest. ‘We refused,’ she said. ‘Why should we have to pay to find out what happened to our brother at the hands of the state?’ She added: ‘Death has no colour and neither does mental health. I am for justice. Are you?’

Prominent criminal defence barrister Francis Fitzgibbon QC accused Grayling of ‘breathtaking hypocrisy and stupidity’ and called on both limbs of the legal profession ‘to unite to fight for human rights, against the cuts to judicial review and above all the destruction of legal aid.’ Justice is ‘not a commodity that can be bought and sold to the highest bidder,’ said Fitzgibbon. ‘That we even have to be here protesting shows how extreme, subversive and insolent the people in charge have become.’

Professor Costas Douzinas, of Birkbeck College, was equally scathing in his critique of the government’s Magna Carta celebrations: ‘The Global Law Summit demonstrates that global capital has hijacked human rights,’ he said. ‘It demonstrates that global law is for capital, not for humans.’  The professor added that ‘Law without justice is like a body without a soul. It is a dead letter. It does not inspire obedience.’ Encouraging the rally not to give up the fight to save the justice system, he said: ‘The only battle we cannot win is the battle we do not join.’ 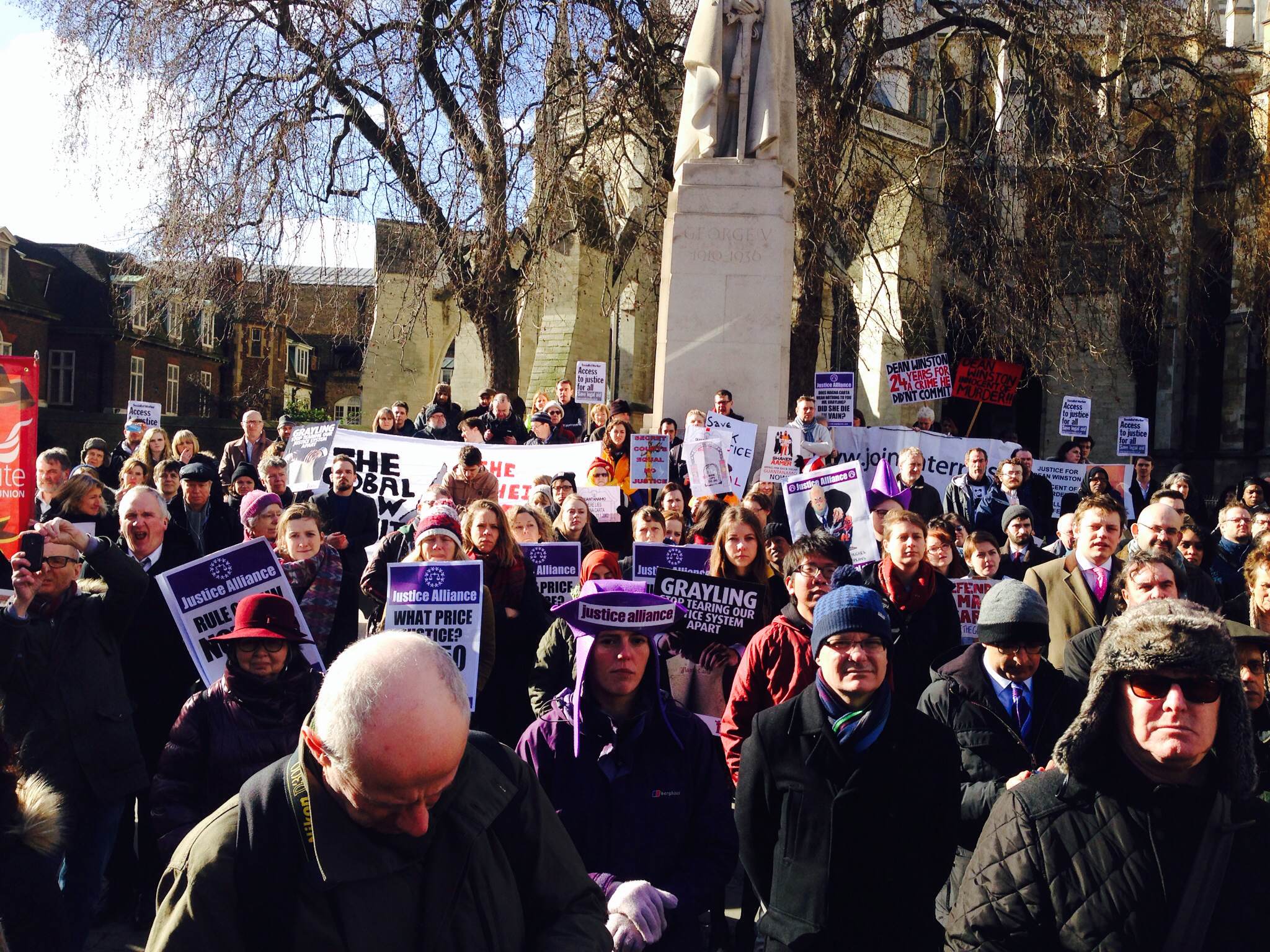 Not the Global Law Summit: Outside parliament on 23rd February

Beyond satire
Shadow solicitor general Karl Turner MP told the rally that Grayling’s ‘bull in a china shop approach’ had rightfully earned him the title ‘Failing Grayling.’ The current Tory-led government is ‘beyond satire’, added the Labour MP for Hull. ‘Grayling’s incompetence is not because he doesn’t have a law degree; he is just incompetent. He has been held unlawful so many times, he ought to be in a prison rather than running the prison system,’ he said.

Citing the only commitment Labour have made on legal aid if they are elected in May – their pledge to reverse coalition plans to slash the number of criminal duty contracts – Turner said: ‘We’re not going to throw 1,000 experienced solicitors’ firm on the scrap heap. That’s a start.’

After impeaching ‘King John Grayling’ – a giant papier mache ‘Chris Grayling’ which has had a thirteenth century makeover since last year’s ‘Grayling Day’ protest – on the basis of his convictions for ‘misleading the House of Commons and the people’, ‘obstruction of justice’, ‘abuse of power’ and ‘abuse of oath of office of Lord Chancellor’, the protestors marched with the puppet to the Queen Elizabeth II conference centre chanting ‘King John Grayling, OUT OUT OUT’ and ‘Magna Carta, NOT FOR SALE.’

Accompanied by medieval-style musicians A Merry Noyse Minstrels, the protestors delivered a letter from the Justice Alliance to the organisers of the Global Law Summit, together with a Magna Carta scroll containing clauses 39 and 40, ‘the principles of which we believe are most important today’, according to the letter.

The letter continues: ‘It has been read out at Runnymede, where it was originally sealed, and carried by foot for 42 miles by the Justice Alliance to Westminster in defence of the legacy of Magna Carta.

‘We hope you will read this out at the Global Law Summit, given that it is not quoted anywhere in the brochure for the event.’