Justice Matters launch: ‘No return to the status quo’

Justice Matters launch: ‘No return to the status quo’ 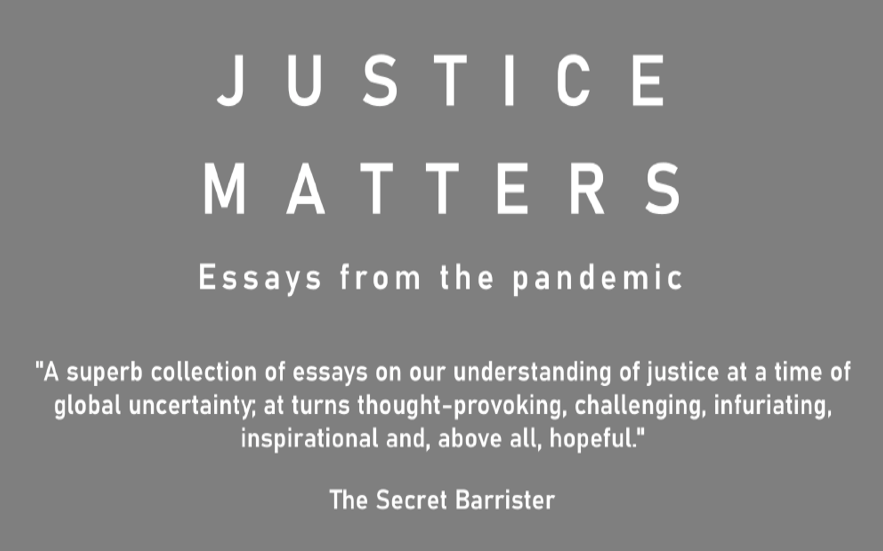 ‘Corona is a housing crisis’ said Karen Buck’s, MP for Westminster North in message at last week’s launch for anew book by the Justice Alliance. In her essay, the MP tells the reader that the pandemic has shone a light on housing in the UK. ‘Covid-19 and the ensuing lockdown brutally exposed what was already well known to practitioners,’ she wrote. ‘That is, we have a series of inter-locking crises of unmet housing need that traps those with the least market power in the worst housing conditions.’

Justice Matters: Essays from the Pandemic is a collection of essays written by legal aid lawyers, frontline workers in community groups and legal observers at the Black Lives Matter protests, members of the judiciary and politicians. It is produced by the Justice Alliance and published by Legal Action Group. Contributors include Baroness Hale, Dr Laura Janes of the Howard League for Penal Reform and Deborah Coles of INQUEST.

Justice Matters was launched last week with an online event with panel debates and readings. In his foreword, the former UN Special Rapporteur on extreme poverty and human rights Philip Alston highlighted the impact of the ‘staggering cuts to legal aid’ and ‘the endless pressures on under-resourced courts’ . ‘Looming over all of the challenges identified by the various authors is the certain prospect of a new set of policies that will not be called “Austerity version 2.0” but will nevertheless look all too like the radical policies championed by George Osborne and David Cameron starting in 2010.’

‘There is no doubt that new policies are need to to reinvigorate the rule of law and as Baroness Hale puts it “to get back to a properly functioning constitution. At the same time there will also be an economic crunch generated by all of the challenges… and further compounded by the ended for more serious and concerned responses to climate change. The combination of challenges cannot be met by wanting to return to any particular status quo ante.’
Philip Alson, UN Special Rapporteur on extreme poverty and human rights

At the online launch event, there were two panels. Housing lawyers Sue James, director of Hammersmith and Fulham Law Centre, barrister David Renton together with Karen Buck, joining late following a vote in the commons, considered housing and the pandemic in the first. James and Renton addressed the immediate effect lockdown has had on their clients.

Renton stressed how unemployment, job security, poverty wages and the benefit system impact people’s homes. ‘There is a very large number of people who are all in the same boat that, without Covid, they were fine, their home was safe. But with Covid, this is no longer the case,’ he said.

With the eviction ban coming to a close, both anticipated thousands coming to the civil courts. They advocate the end of ‘Section 21’ and ‘Ground 8’ evictions. Section 21 are evictions through no fault of the tenant. To use Ground 8, a landlord must show that a tenant is only eight weeks in arrears. Once proved, a judge is prevented from considering the reasons for the arrears.

James, drawing from her travels in Australia through the Winston Churchill Travelling Fellowship, discussed the benefits of health-justice partnerships. ‘Someone approaching their doctor who has bad health doesn’t know that it’s really caused by their poor housing,’ she said. The panel went on to discuss the advantage of lawyers moving away from their silos to practicing law in a different, holistic way. James envisions lawyers becoming part of a crisis prevention team alongside doctors and social workers.

The panel ended on a positive note with James reflecting: ‘I think we did see hope over the last six months, and we saw people coming together and looking after each other’.

Etienne’s practice includes dealing with issues such as the connection between the disproportionate number of black school children who are excluded and the increase in criminalisation of young black people.‘Those at the most risk of exclusion are the same ones who are hit the hardest by the pandemic,’ he said. He argued that the Government had abdicated its responsibility for guidance to schools regarding exclusions in the wake of the pandemic and those children most effected were young black students. He called for ‘an immediate moratorium’ on school exclusion, except in the most exceptional circumstances. Etienne argued that where evidence and data showedwhere ‘persistent systemic disproportionate impacts on marginalised groups on reasons related to race – that meets the definition of institutional racism’.

Friedman’s essay (‘Victims, not recipients of justice’) discussed the over-policing of black communities. She stressed that we cannot carry on living in a criminal justice system where it is disproportionately skewed against black defendants. She drew a comparison with the Bronx defenders in New York who recently, in light of George Floyd’s murder, issued a statement calling on their mayor to stop bloating the police budget and curb the incarceration of young black men. Friedman proposed that similar initiatives should be implemented in London.

Etienne, Djan and Daley discussed the importance of promoting access to the legal profession for young black and brown aspirants. They collectively drew on the challenges they faced, especially in light of the recent experience of the barrister Alexandra Wilson who was mistaken for a black defendant three times. ‘If legal practitioners can’t even have a basic level of respect, for their black colleagues in the profession, it is no surprise that black defendants get longer prison sentences and are more likely to go to prison,’ Etienne said.

Justice Matters: Essays from the Pandemic is available here.

Our print magazine is Proof. Contributors include Michael Mansfield QC, Bob Woffinden, David Rose, Eric Allison and Ian Cobain.
Buy Proof Magazine
The latest issue (Why legal aid matters) includes Helena Kennedy QC and Martha Spurrier in conversation, David Conn on the legacy of Hillsborough - plus how to build your own law centre.
Alexandra and Kaya are Justice Gap reporters

Justice Matters: 'Nothing like a pandemic to expose the…
Housing campaigners calling for a halt on evictions and…
Law Centres to receive £3m funding to help survive COVID-19…
'Covid-19 has exposed the lack of support for victims of…
Covid-19 update: Concerns raised about access to justice…