INTERVIEW: ‘No parent should have to go through what we went through’

INTERVIEW: ‘No parent should have to go through what we went through’

‘No parent should have to go through what we went through’

Jon Robins meets Margaret Aspinall, chairwoman of the Hillsborough Family Support Group who lost her son in the 1989 disaster. This is an edited version of an article that appears in Proof issue 3 – out Monday, July 10 (order here).

Margaret Aspinall recalls the first time she watched video footage of her in the crowd in the Leppings Lane terrace minutes before kick-off on April 15 1989. James is one of a number of fans playing with a beach ball on a sunny day. ‘You can see him happy, then you see him worried,’ she says. ‘Then he’s on his back on the pitch, arms outstretched and the police throw a coat over his face. Nobody helped him.’ The video was played at the Warrington inquests 27 years after the tragedy that claimed the lives of 96 Liverpool fans.

It was James’s first away game. ‘He was just 18 years old,’ says Aspinall. ‘Even now the feelings are raw. It saddens me. He goes off to this game and he came back five days later in a coffin. You need answers.’

I meet Margaret Aspinall, who chairs the Hillsborough Family Support Group at Liverpool Football Club’s home, Anfield. She has just attended a meeting to discuss proposals for a ‘Hillsborough Law’ which aims to create a legal duty upon public authorities to tell the truth and to allow bereaved families the same resources at inquests.

‘Every step of the journey over the last two decades, we have had to pay ourselves – through fundraising concerts and the generosity of ordinary working class people,’ Aspinall tells me, ‘and every step of the way they had their representation paid. What chance did we ever have?’

The ‘they’ to which she refers are, of course, South Yorkshire Police – the other villain of the Hillsborough saga, as Guardian journalist David Conn has put it, is a legal system that not only failed the families but conspired to make the case the most shocking cover up in recent legal history. 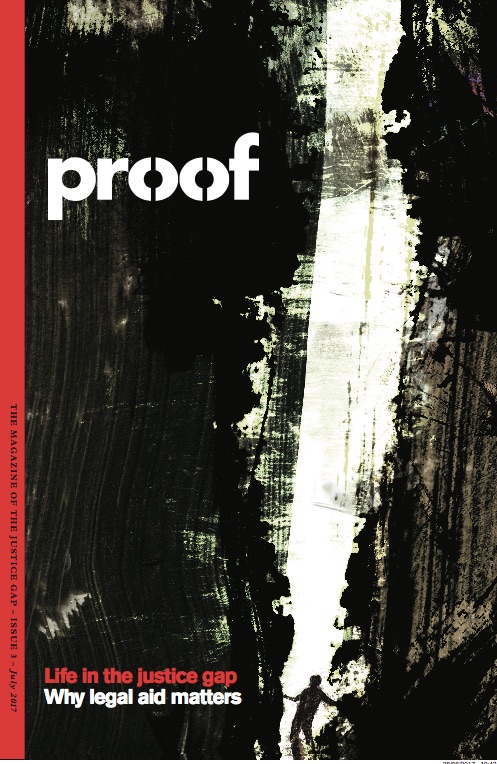 Duckenfield is charged with the manslaughter by gross negligence. ‘We will allege that David Duckenfield’s failures to discharge his personal responsibility were extraordinarily bad and contributed substantially to the deaths of each of those 96 people who so tragically and unnecessarily lost their lives,’ said Sue Hemming, the CPS’s head of special crime and counter-terrorism.

Bettison is charged with four offences of misconduct in public office relating to telling alleged lies about his involvement and the culpability of fans. Full details.

An unedited version is available in the next issue of Proof magazine, issue 3 (Life in the Justice Gap) co-produced with the Justice Alliance (order here) 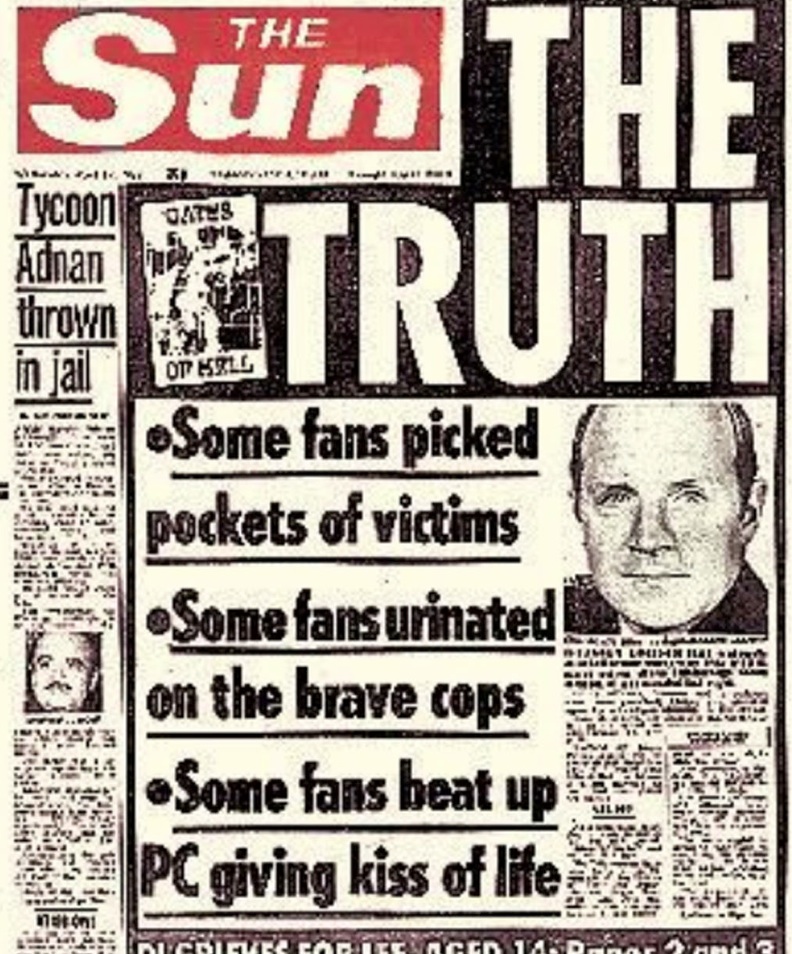 There is little to celebrate about our legal system in the saga of Hillsborough, other than the dogged tenacity of the families and their lawyers whose campaign for justice culminated last year when the jury at the Warrington inquests returned their verdict that the 96 football fans who died in the 1989 disaster were ‘unlawfully killed’.

The real story of Hillsborough is finally well understood, and the principal culprits now identified. It was the South Yorkshire Police who even at the Warrington inquests tried to maintain a false narrative that it was drunken and ticketless fans that were to blame. They were aided and abetted by a willing press who pedaled the lies – most infamously, the Sun’s who under the front page headline ‘THE TRUTH’ reported that Liverpool fans pick-pocketed victims and urinated upon ‘brave cops’.

Then there are the politicians: Margaret Thatcher’s former press secretary Bernard Ingham who branded Liverpool fans ‘tanked up yobs’; Jack Straw who, as New Labour home secretary, failed to order a proper inquiry in 1997; and David Cameron likening the families’ search for closure to a ‘blind man, in a dark room looking for a black cat that isn’t there’.

What has been less well understood is the role our legal system played in maintaining the epic cover up. Notwithstanding Lord Chief Justice Taylor’s inquiry four months after the disaster which established that the main cause was a failure on the part of the police, the grieving families were failed repeatedly: the fatally flawed 1991 inquest with its finding of ‘accidental death’ and Jack Straw’s judicial ‘scrutiny’ by Lord Justice Stuart-Smith in 1998 which ruled out further prosecutions. It took the Hillsborough Independent Panel, set up by New Labour in 2010 and chaired by the bishop of Liverpool, James Jones, to get the process back on track.

The panel confirmed Taylor’s key finding that the main reason for the disaster was a ‘failure in police control’.

The problem with inquests and inquiries is that they don’t serve the victims and the bereaved well, reflected Bishop Jones in 2011. ‘They tend to distance those most affected,’ he said. ‘People with power in the processes are often patronising to the victims. In a culture of blame, liability and litigation over culpability conspire against getting to the truth.’

The Warrington inquests sat for 279 days – the longest in English legal history – and Margaret Aspinall was there for each day except maybe six ‘and that’s only because I was doing something else on the part of the group’.

At the start, did she believe they would deliver justice? ‘At first, no,’ Aspinall replies. ‘The police came out with the same scenario that had been discredited twice before – about fans coming late, without tickets, being drunk and acting like hooligans. We just thought, here we go again.’

The mood changed when their own lawyers were challenged the police. Aspinall recalls the shock of watching previously unseen video including the footage of her own son playing with the beach ball. ‘I was angry. Some of this video I’d never seen before. It was very hard to watch,’ she says. The evidence had been there for all those years. ‘It could have made the families’ lives so much easier 21 years ago but, no, they decided to keep it hidden,’ she continues.

The inquests became another more opportunity for South Yorkshire Police’s QCs to spin their discredited account of drunken fans bringing calamity upon themselves. John Beggs QC attempted to argue that it was the former chief superintendent of South Yorkshire police, David Duckenfield that had been ‘besmirched by the media’ and pushed for video footage of football hooliganism to be shown to the jury.

‘It was done to get a reaction from the families, to provoke us,’ Aspinall says. ‘We were told when we started the inquests we were not to show any emotion because the jury were facing us. It was raw. How can you not show emotion?’

The jury had 14 questions to answer. Following the critical question six (i.e., were they satisfied that those who died were unlawfully killed?), there was another: ‘Was there any behaviour on the part of football supporters which caused or contributed to the dangerous situation at the Leppings Lane turnstiles?’ This question was dealt with in two parts; the jury having answered ‘no’, an extra question was added: whether any behaviour on the part of fans ‘may’ have caused or contributed to the tragedy?

Aspinall recalls that the families got sight of the questions only a few days before the jury was sent out. They immediately latched on to the potential significance of the ‘may’ and objected to its inclusion. ‘Why did they put that in?’ she says. ‘We didn’t want the fans getting the blame – not even a little bit.’

‘Your heart was just pounding when it came to that question,’ she recalls. ‘Then there was a great sense of relief… at last, at last. But it was a day of mixed emotions. This is what we waited for all these years. And then it was all needless; all unnecessary; all avoidable – but it took 20 odd years to get that verdict.’

Legal aid generally is not available for inquests because, as the Ministry of Justice puts it, the process ‘is a relatively informal inquisitorial process, rather than an adversarial one’.

Hillsborough should put that myth to rest.

In the Warrington inquests, the families did have properly funded representation – but it was not legal aid. Theresa May, as home secretary, ensured that the Home Office and other government departments provided non-means tested funding (i.e., it did not come through the Legal Aid Agency).

It was not like that the first time around. Trevor Hicks, whose two daughters were amongst the 96 dead, asked 42 grieving families to pitch in £3,000 each for a barrister at the first inquest. Margaret Aspinall recalls being offered a cheque for £1,226.35 by way of compensation.

After last year’s inquests, Margaret Aspinall described the impact of that offer at a meeting at Westminster last year. ‘I would have loved to have told them to shove that cheque where the sun don’t shine. But we had to raise £150,000 to get a barrister. So I took it,’ she told MPs last year. ‘Then I got to the inquests and saw the police had 10 barristers, paid by the state, against our one.’

‘I had four young kids at the time,’ she tells me. Her eldest, David was just 15 years at the time. James would have been 18. ‘I am not crying poverty. I came from a houseful of love. My husband had been out of work for about six months. We had nothing. I had to accept the money. It took me a long time to get over that. I still haven’t got over it really.’

Every 15 minutes the Kop singing ‘You’ll never walk alone’ is played over the Anfield speakers for the benefit of fans from all over the world touring the hallowed ground. The cab that takes me from Lime Street to Anfield bears the legend ‘Total eclipse of The Sun’, a reference to the ongoing boycott of the tabloid.

The Hillsborough families had always had a community behind them, I say. ‘That’s why we have to try and change things,’ she says. ‘I never want any other parent or sister or brother to accept an offer like that and live like that. No parent should have to do that.’