Corbyn: ‘If we want access to justice, we have to pay for it’

Corbyn: ‘If we want access to justice, we have to pay for it’ 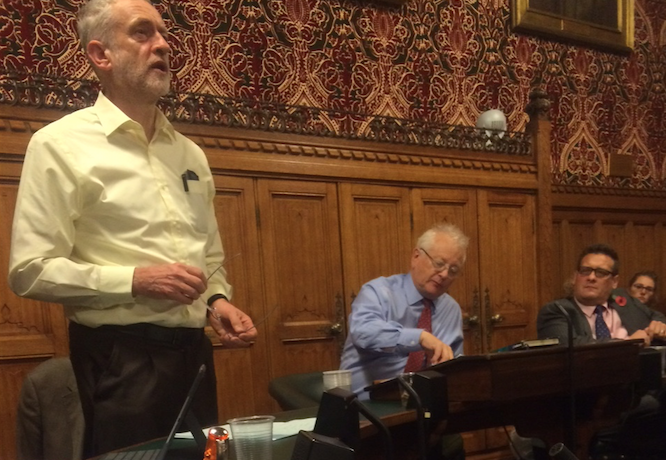 Yesterday Labour launched a comprehensive review of legal aid in a packed committee room at the House of Commons, where Labour leader Jeremy Corbyn outlined his own commitment to access to justice. After Corbyn’s election as leader of the opposition, one of his first acts was to ask Lord Bach (aka @FightBach) to carry out a review encompassing legal aid for civil, crime, family and social welfare law.

We at Young Legal Aid Lawyers (YLAL) were invited to attend the ‘summit’ meeting to launch the review, along with representatives from numerous practitioner groups and legal advice services. As well as the Labour leader, the meeting was addressed by Shadow Chancellor John McDonnell, Shadow Justice Secretary Lord Falconer, Lord Bach and Karl Turner MP.

A leader “who gets legal aid”
Lord Bach explained that the purpose of the review is to consider the principles that should be at the heart of the legal aid system, to look at the consequences of the Legal Aid, Sentencing and Punishment of Offenders Act 2012 (LASPO), to develop a credible and principled legal aid policy and to influence the present government to make changes to existing policies. Bach acknowledged that Labour did not offer enough at the 2015 general election, but said his party now “has a leader who gets legal aid”.

In considering the injustice which has resulted from LASPO, Lord Bach said that one statistic tells the story: at the end of 2009/10 in the final year of the Labour government, the number of legal aid cases opened for social welfare law was at an all-time high of 471,418. By the end of 2013/14, one year after the implementation of LASPO, this figure had fallen by nearly 90% to 52,703, meaning that “hundreds of thousands of our fellow citizens could not receive advice” for issues such as debt, welfare benefits, housing and employment.

Lord Bach told the meeting that he will chair a commission of experts which will invite oral and written evidence before preparing a draft report in April 2016. The report will be finalised by party conference season in September 2016. 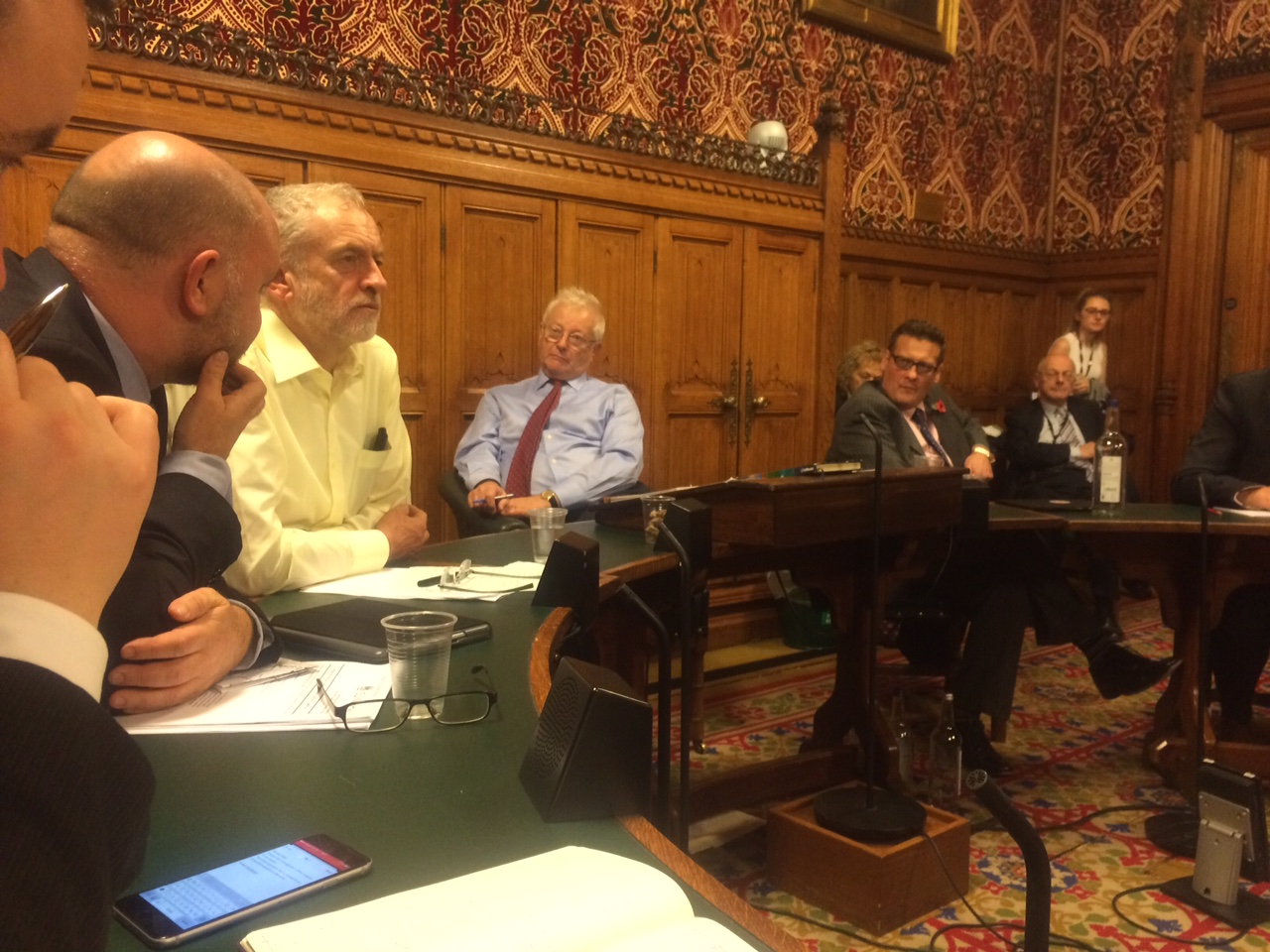 Joining the summit towards the end, Jeremy Corbyn reflected on his family’s personal commitment to justice: his grandfather was a solicitor in Ealing who was known as the ‘poor man’s lawyer’ because he represented people charged with begging and similar offences free of charge. Corbyn is a former chair of the All Party Parliamentary Group on Legal Aid and sat on the Justice Select Committee throughout the last Parliament, and he said that he believes very strongly in access to justice.

Corbyn emphasised that it is the ‘most vulnerable, the most needy’ who are ‘paying the price of legal aid cuts’ by the Coalition and Conservative governments and that something has to change. Labour should ‘recognise the damage that has been done to the legal profession and particularly to young lawyers’. Corbyn also denounced the myth of ‘fat cat lawyers raking it in through legal aid’ peddled by sections of the media as ‘utter nonsense’.

The Labour leader said that since the cuts to legal aid made through LASPO, he has found himself ‘in the invidious position where constituents cannot afford a lawyer but are not eligible for legal aid’ so he has to try to find pro bono advice for them. However, Corbyn dismissed the idea that pro bono should be a substitute for proper publicly-funded legal advice and representation:

‘Pro bono, charity and food banks are not the solution to inequality. If we want a rights-based society with equal access to justice, we have to pay for it.’
Jeremy Corbyn

The review therefore gives Labour the basis ‘to develop policies to ensure access to justice for everybody’. Stressing that his role as leader of the Labour Party is ‘not to dictate policy but to open up the decision-making process’, Corbyn called for attendees to provide evidence for the review and said he hopes that his party will commit to reverse legal aid cuts. Corbyn also asked people who care about legal aid and access to justice to submit questions for his crowd-sourcing exercise for Prime Minister’s Questions as a way of bringing some publicity to the issue. His speech was greeted with applause after he ended with this rallying cry:

‘As a party we are committed to saying nobody should go unrepresented. Access to justice is a fundamental human right. Many died for it, let’s defend it.’
Jeremy Corbyn

Legal aid cuts are “a false economy”
The Shadow Chancellor, John McDonnell, had earlier expressed his own support for legal aid, referring to his time on the Justice Select Committee with his party leader during the last Parliament: ‘Jeremy and I took a specific interest in the withdrawal of legal aid, which is a false economy resulting in more expenditure at the end of the day.’

McDonnell explained that in his view, legal aid cuts sit in the context of a government which was ‘systematically dismantling the structure of the welfare state – not just the NHS, council housing and local government, but access to justice as part of that as a mechanism for people to enforce their rights. It is part of the erosion of the welfare state. In the short-term, cuts to legal aid do not save much money, and in the long-term the costs are immense.’

McDonnell pledged that Labour ‘will use every opportunity to highlight the economic and social consequences of legal aid cuts’ and will work with legal aid lawyers, advice services and charities ‘to develop a policy to reinstate access to justice’.

There was widespread support in the room for the approach set out by Labour – as Steve Hynes from Legal Action Group said the review was ‘an opportunity to change the rhetoric, as the public instinctively understand access to justice’. Richard Miller, the head of legal aid at the Law Society, stressed that justice is a good in its own right and described legal aid lawyers as ‘the oil in the machinery of justice’ who can ‘nip problems in the bud and save money in the long run’ through early advice.

Nicola Mackintosh QC, co-chair of the Legal Aid Practitioners Group (LAPG), referred to the Manifesto for Legal Aid prepared by LAPG before the general election as a guide for how Labour can put pressure on the current government to make changes to the legal aid system for the benefit of the most vulnerable groups in society. YLAL wholeheartedly endorses the LAPG Manifesto, as well as Mackintosh’s observation that ‘there are younger, enthusiastic lawyers who still want to go into a justice system that is improving people’s lives’.

Other attendees called for Labour to commit to repealing LASPO and, in Steve Hynes’ words, replace it with an Access to Justice Act.

Access to justice is a constitutional right
As co-chairs of YLAL, Rachel Francis and I urged the review not to forget what has been lost from the scope of legal aid and agreed that legal aid cuts are a false economy as a result of knock-on costs to the state in the justice system and elsewhere. Nevertheless, we believe a funding commitment will be required to restore access to justice. We set out what we consider should be the first principles at the heart of the legal aid system:

YLAL look forward to working with Labour to develop its policy on legal aid and to influence the present government. We will support any efforts to improve access to justice, which has been so severely restricted in recent years.

YLAL prepared a briefing note for the Labour legal aid summit, which is available on its website here.

2 responses to “Corbyn: ‘If we want access to justice, we have to pay for it’”

Victims of trafficking failed as a result of legal…
Election 2019: 'Populism is the order of the day'
Lack of legal aid for immigration detainees in…
Environmental lawyers puts councils 'on notice' over…
Election 2019: Opposition parties' manifestos compared