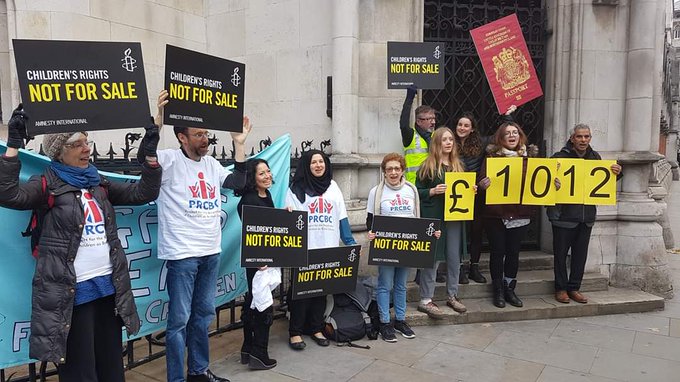 Appeal judges have confirmed that the Home Office’s fee of more than one thousand pounds for registering children as British citizens is unlawful. The £1,012 fee is not required by children who are automatically born British but relates to children that are not born British; however, they fulfill all the conditions to attain citizenship after their birth.

From the Home Office’s own ‘visa fees transparency data’, it costs the UK government £372 to process an application for a child’s registration as a British citizen. However, the Home Office have been charging nearly triple profiting £640 on every application. Moreover, the £1,012 is separate to the mandatary fees incurred from the UKVCAS biometric enrolment appointment fee—approximately £200, and the additional £19.20 biometric enrolment fee.

The claimant in the case  in the case (R (Project for the Registration of Children As British Citizens & Anor) v Secretary of State for the Home Department [2021] EWCA Civ 193) is of Nigerian descent and was born in the UK in July 2007. The claimant lived with her single-parent mother with her other two siblings – the family was destitute and has been supported by their local authority since 2015. The claimant’s mother was unable to pay the full £973 (the registration fee before it was increased to £1,012), and so submitted the application with the administration fee of £386. The Home Office refused the application.

The claimant’s challenge was successful on the basis that the Secretary of State failed to discharge her duty to safeguard and promote the welfare of children when setting the fee pursuant to section 55 of the Borders, Citizenship and Immigration Act 2009.

As the circumstances currently stand, the Secretary of State would have to undergo a review of her fee regulations and consider the children’s best interests.

However, the Court of Appeal has granted permission for the claimants to the Supreme Court on their broader challenge to the lawfulness of the Immigration and Nationality (Fees) Regulations 2017 and 2018. The claimants argued that if an unrealistically high registration fee for these children exists, their entitlement to register as British citizens is effectively void.This follows a long campaign by the Project for the Registration of Children as British Citizens – see here.

If the Supreme Court accepts the claimants’ case, the Secretary of State may have to commit to a more reasonable fee, rather than just a review.