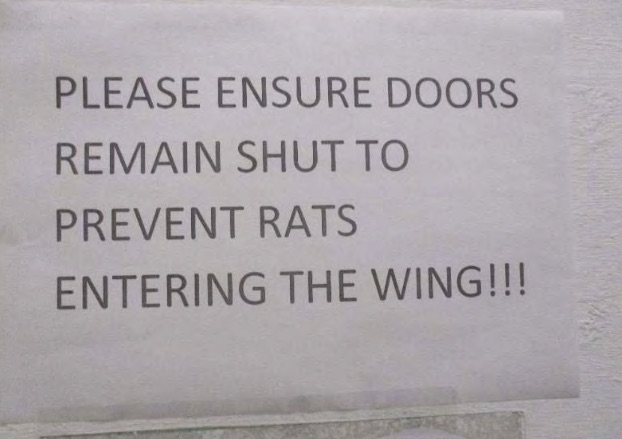 'Rats on wing': A sign found at HMP Bedford

HMP Bedford was found to be ‘fundamentally unsafe’ with rats, pigeons and cockroaches ‘everywhere’, rising drug-fuelled violence and self-harm and a dangerous lack of control, new report has revealed. The report published earlier on Tuesday followed an unannounced inspection by the prisons inspectorate.

Peter Clarke, the chief inspector of prisons, found the prison, which has been on special measures since May, to be in a state of ‘decline and decay’ and to have achieved ‘just 19 of the 68 recommendations’ made during its last inspection in 2016. He said the prison fulfilled ‘none of the basic objectives of imprisonment’. 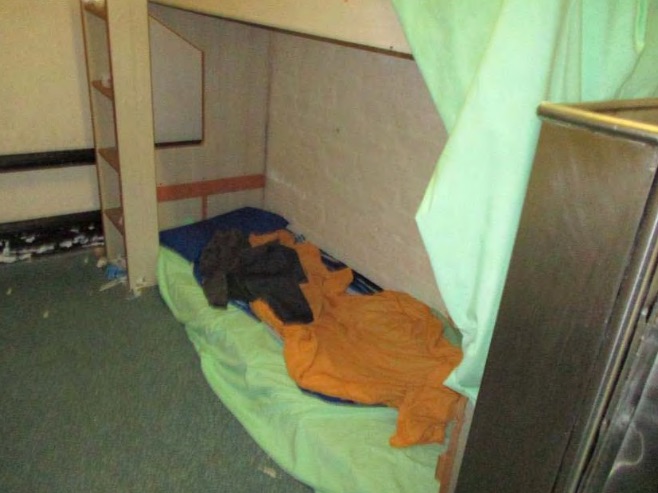 An occupied cell at HMP Bedford

The living conditions were reported to be ‘poor, often overcrowded, dirty and vermin infested.’ Clarke said that during the inspection, which took place between 28 August and 6 September 2018, ‘a disturbed prisoner in the segregation unit lured several rats into his cell before killing them.’ A sign on one wing read, ‘Please ensure doors remain shut to prevent rats entering the wing!!!’

For prisoners with disabilities, the report found, ‘insufficient attention was paid to meeting their basic needs’ and they had to rely on the goodwill and friendship of other prisoners for help. One amputee told inspectors that, owing to a lack of necessary adaptations, he had only had five showers so far that year and to wash ‘he had to sit on the floor of his cell and try to splash himself from the sink’. He was also in a cell with no adaptations, with a broken wheelchair which he was not able to wheel. 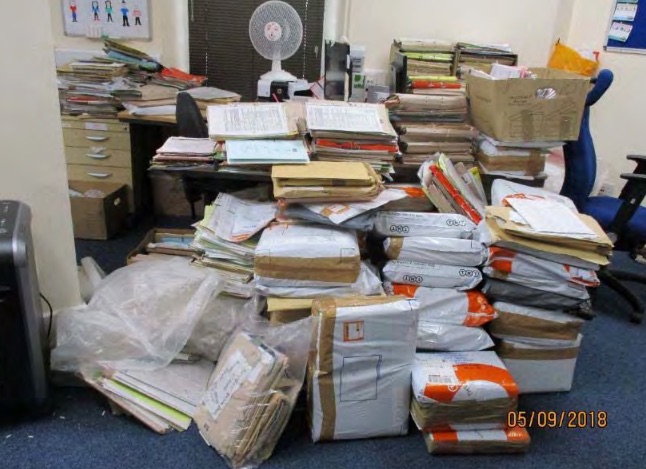 Files waiting to be processed in offender manager unit

It was reported that ‘violence of all kinds had risen alarmingly’ since 2016 and ‘more than two-thirds’ of prisoners had felt unsafe at some time. The rate of assaults on staff was ‘the highest in the country’ and there had been ‘116 assaults on staff’ in the six months prior to the inspection. More than three-quarters of available officers (77%) were found to have ‘had less than one year’s service’. Clarke said that at times ‘it felt as if prisoners were effectively in control’.

‘Much of the violence was fuelled by drugs,’ the report said. One prisoner in five told the inspectors that they had acquired a drug habit since arriving at HMP Bedford and ‘almost half’ of the prisoners surveyed said that it was ‘easy to get drugs at the prison.’

The report found that only ‘19% of prisoners were in any form of purposeful activity’ and ‘too many prisoners left the prison no more qualified or skilled for work than on entry to the prison’.

Clarke said that the collapse in the prison’s standards was ‘as sad as it is inexcusable’.

So concerned was Clarke by his findings and the lack of progress that had been made to improve the prison, even when under special measures, that he invoked the urgent notification process under which the Secretary of State is obliged to respond publicly within 28 days with proposals for improvement.

The Justice Secretary David Gauke published an action plan to stabilise HMP Bedford on 9 October 2018 in response to Clarke’s urgent notification. He said: ‘Additional experienced officers will be brought in, we’ve reduced the number of prisoners and are providing special training for newer members of staff – all of which will ensure order is restored and maintained in the long-term. I am confident that greater security will stem the flow of drugs, which is fuelling violence, and allow staff to properly focus on creating a culture of work and learning that will help turn prisoners’ lives around.’