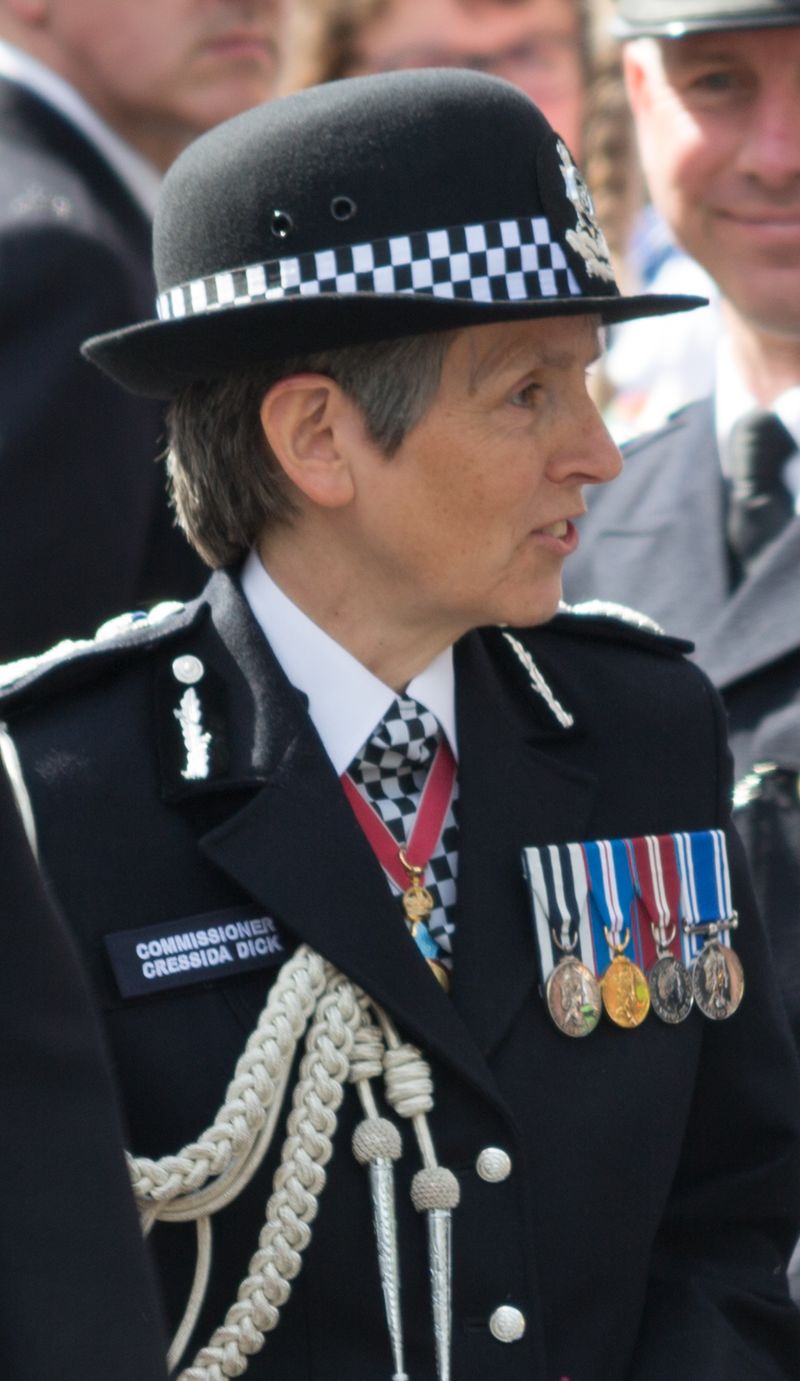 When Bernard Hogan-Howe stepped down as commissioner of the Metropolitan Police, relations between the Met and the Government could scarcely have been more strained. As Home Secretary, Theresa May publicly criticised the Met for being ‘too White’ and Hogan-Howe of a ‘knee-jerk’ response to knife crime. Relations with New Scotland Yard hardly improved when Theresa May marked her appointment as Prime Minister with a broadside against the injustices caused by continued racial disparities in the criminal justice system. It is surely no coincidence that Hogan-Howe went on to retire seven months early, albeit part-way through an extension of his initial five-year tenure.

With her appointment as his successor, Cressida Dick virtually completed the set of senior policing appointments, often, as now, being the first woman to hold them. That included spells as a deputy and assistant commissioner.  Her appointment, was broadly welcomed by the commentariat. One journalist, for example, described it as ‘the most dramatic evidence so far of a transformational change in the sociology and direction of British policing’.

Others had profound misgivings. Dick was the officer in command of the operation that led to the killing of Jean Charles de Menezes – an operation that was heavily criticised by an inquest jury. Unsurprisingly, for the de Menezes’ family, the catastrophic failure of that operation rendered Dick unfit for promotion. They were not alone.  Even before that, Dick had been a leading officer in the divisive Operation Trident, which for many, was predicated on the idea that people in Black communities were more likely to commit crime. That same operation was implicated in the killing of Mark Duggan, which sparked the London Riots in 2011.  From this perspective, Dick’s promotion was simply the substitution of one establishment face for another. They will not be reassured by the Commissioner’s round of media and public appearances in recent weeks.

The Commissioner has been widely reported as favouring ‘an Al Capone style’ response to the serious violence sweeping the Capital. Targeting those thought to be responsible for serious violence for any criminal offence, just so long as it takes them off of the streets. Al Capone, of course being the prohibition-era kingpin, who was eventually imprisoned not for the countless, robberies, extortions or murders in which he was implicated but for tax evasion.

According to The London Evening Standard, we can expect ‘even more proactive’ policing of so-called known ‘hotspots’ including ‘intelligence-led stop-and-search and the use of specialists in covert tactics’.

It is not immediately clear what politicians and police leaders mean when they talk of ‘intelligence-led-stop-and-search’. It typically features in debates about the need to ‘increase’ stop and search. It might be said to be a nod to the systemic misuse of stop and search powers. But too often, the so-called intelligence base is a façade for racial profiling.

As if that wasn’t bad enough, there is also a growing recognition within Government that stop and search has a negligible effect on reducing crime. That is a message that community organisations have been trying to have heard for decades. The Government’s recently published Serious Crime Strategy for example acknowledged that:

Home Office research made similar findings in 2016, when it was reported that large scale increases in stop and search had:

… no statistically significant crime-reducing effect from the large increase in weapon searches during the course of Operation Blunt 2. This suggests that the greater use of weapons searches was not effective at the borough level for reducing crime.

The commissioner isn’t convinced. For her, the evidence is ‘conflicting’. Instead, she has defended a four-fold increase in the Met’s use of the power of stop and search without the usual need for reasonable suspicion – Criminal Justice and Public Order Act 1994, section 60. Even where reasonable suspicion is required, a black person, for example, is either five or eight times more likely to be stopped than a white person, depending on which set of figures one is looking at. That pernicious problem balloons where there is no requirement for reasonable suspicion. Research by the Equality and Human Rights Commission found that black people have been 28 times more likely to be stopped under s.60 and Asian people twice as likely than someone who is white. It is difficult to see what evidence would have to be put forward before the commissioner (and others) for them to finally accept that simply ‘increasing’ stop and search is corrosive of community relations and achieves no significant benefits and counter-productive.

The increased use of s.60 is one of the legacies of Hogan-Howe.

Late in 2015, he announced that he would make more use of s.60, linking a reduction in its use with a 25% increase in knife crime. It was this that Theresa May rightly criticised as a ‘knee-jerk’ reaction, premised on a ‘false link’ between ‘reducing’ stop and search and an increase in knife crime. It is notable that the Prime Minister has not repeated her criticism of the Commissioner. Talk is cheap.

Also this week, the Commissioner appeared at a debate on policing and counter-terrorism arranged by the Human Rights Lawyers Association. Again, it was noted that Dick was the first Commissioner, ever to attend such a meeting. And again, any cause for optimism arising from that was quickly dispelled.

In her opening remarks she described the force as ‘more accountable’, ‘less secretive’ and embracing of human rights obligations as a way of improving policing. The system, she said, ‘isn’t perfect but broadly works’. She went on wistfully to describe the institution that she joined in 1983.  She described an institution which at its core was ethical and committed to serving the public but which lost its way later in the eighties and nineties.

1983 was the same year that Colin Roach died in Stoke Newington Police Station. It was said that he shot himself but friends and family immediately felt that the police account was suspicious. Those affected by his death are still asking ‘Who Killed Colin Roach?’. As poet Benjamin Zephaniah recalled earlier this year, Roach’s death was also emblematic of a wider sense of injustice about the use of sus laws against Black communities. These were powers that allowed officers to stop and arrest individuals acting ‘suspiciously’.

The Commissioner went on to say that she was ‘very proud’ of the progress made by the Metropolitan Police since the turn of the century, including in areas such as community cohesion. She referred specifically to ‘the considerable support of communities’ for the way that her officers were now deploying, in particular, counter-terror policing strategies. That included the use of Schedule 7 to stop and detain people at ports and airports. She alluded in similar terms to support for the Government’s Prevent programme and the use of stop and search powers.

The independent police complaints watchdog has just had its third recent rebrand, this time as the Independent Office for Police Conduct. The IOPC succeeded the Independent Police Complaints Commission , which had been the Police Complaints Authority. Ultimately, whatever its guise, the watchdog has never been able to command the trust of those who rely on it to hold forces like the Met to account. The Mitting Inquiry, setup to examine the practice of undercover officers, including a large number in the Metropolitan Police, forming intimate relationships so that they could spy on their partners and ‘friends’, is in disarray.  The women who describe being tricked into essentially exploitative relationships no longer have faith in the inquiry because officers are being granted anonymity and allowed to provide piecemeal disclosure of heavily redacted documents, which makes it practically impossible to establish accountability for any wrongdoing.

The commissioner’s office has just lost a four-year legal battle (supported by the Home Office) in which the Met fought tooth and nail to overturn a finding that it owed human rights obligations that would improve the legal protection for victims of serious crime who are let down by seriously defective policing. Even as she spoke, communities across the capital were talking about their being abandoned by the State, including the police, except where there was an opportunity to demonise and criminalize them.

The concern over lack of accountability in policing is most starkly illustrated by the persistently disproportionate numbers of black people, particularly men, who die in state custody. The day after the Commissioner’s address to the HRLA, the family of Kevin Clarke, who died in police custody following an apparent mental health crisis, coincidentally, asked: ‘How many more black men have to die in order for something to be done?‘ That doesn’t sound much like renewed confidence in policing. It does however, sound like the sort of question that too many families, in too many similar circumstances have been asking since at least as long ago as the halcyon days of WPC Dick.

It cannot be that an officer of the commissioner’s experience isn’t aware of these critical issues. Presumably then they fall into the ‘not perfect’ part of the system. That demonstrates an astonishing level of complacency. At a time when we need nuanced, courageous thinking, in policing and beyond, we are trapped by a revisionist nostalgia. Rather than learning from the mistakes of the past, they are being embraced, with relish. The consequences of this are predictable. Far from changing, all the signs are that it is business as usual at New Scotland Yard.

This article was first published on April 16, 2018

Michael is a trainee barrister. He has a long-standing interest in policing and related issues of state accountability. He is involved with a number of groups concerned with these issues including the Police Action Lawyers Group, INQUEST and the Human Rights Lawyers Association. He is writing in a personal capacity

Our print magazine is Proof. Contributors include Michael Mansfield QC, Bob Woffinden, David Rose, Eric Allison and Ian Cobain.
Buy Proof Magazine
The latest issue (Why legal aid matters) includes Helena Kennedy QC and Martha Spurrier in conversation, David Conn on the legacy of Hillsborough - plus how to build your own law centre.
Michael is a trainee barrister. He has a long-standing interest in policing and related issues of state accountability. He is involved with a number of groups concerned with these issues including the Police Action Lawyers Group, INQUEST and the Human Rights Lawyers Association. He is writing in a personal capacity

Home Secretary orders review into Operation Midland fiasco
Gurpal Virdi: 'So you want to know about…
Scotland Yard pays out to man fathered by an undercover cop
Met to conduct review following Sarah Everard murder
Harvey Proctor: 'I speak for the those whose voices…