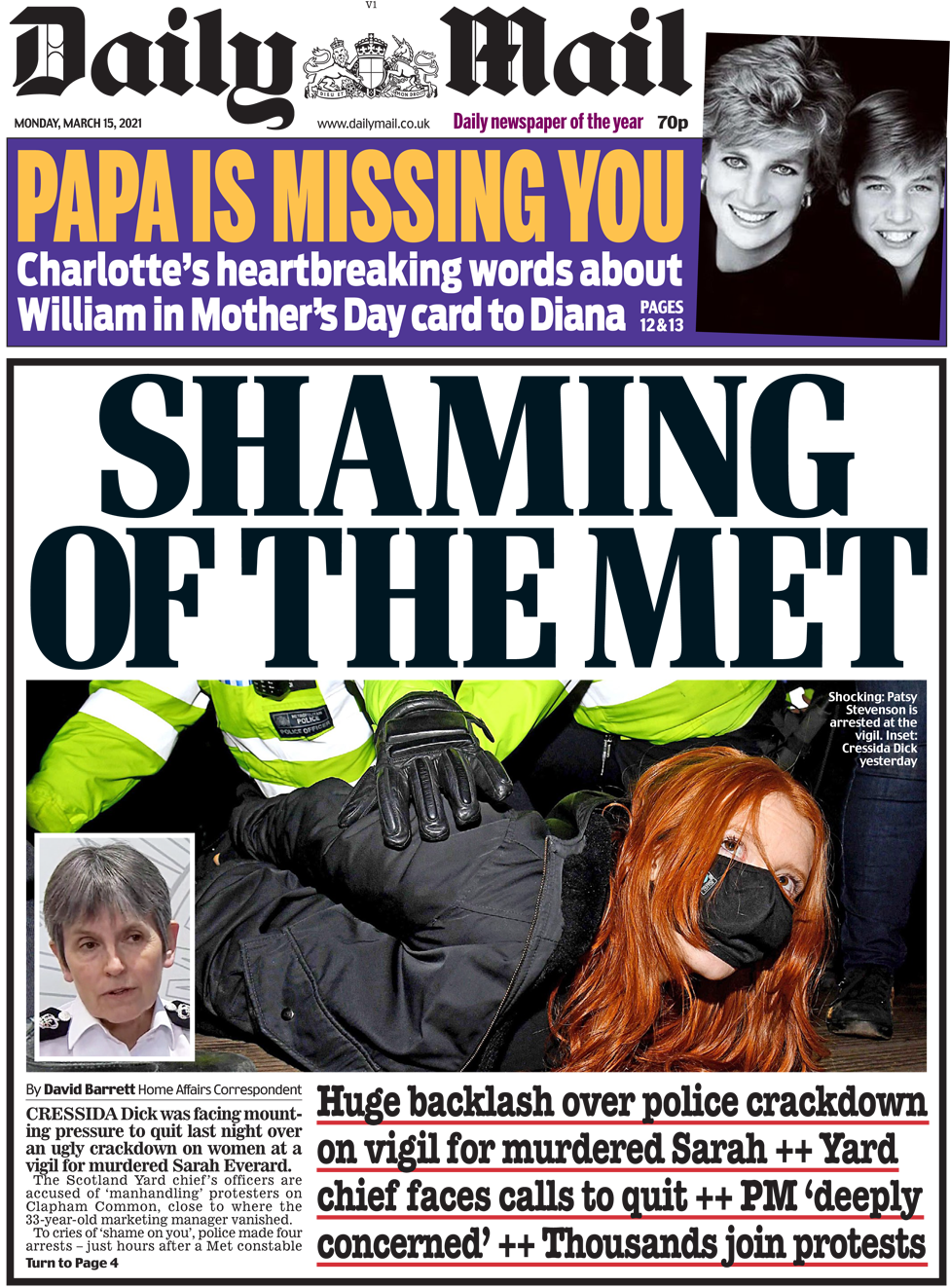 There are increasingly calls on MPs to vote against giving police more powers shock over the Metropolitan Police’s handling of this weekend’s vigil for Sarah Everard.

MPs are due to debate the Police, Crime, Sentencing and Courts Bill today which seeks to strengthen police powers to tackle non violent protests that have a significant disruptive effect on the public or on access to Parliament.’No-one could fail to be shocked by the Met Police’s actions at this weekend’s vigil for Sarah Everard. Priti Patel has said that lessons must be learned, yet if MPs vote this week to extend policing powers of protests they will show that they have learnt nothing,’ commented Kate Allen, director of Amnesty International UK. ‘The apparent excessive use of force by Met police officers is a stark and timely warning about precisely why Parliament must not allow yet more police powers to quash peaceful protest.’

The controversial legislation follows Home Secretary Priti Patel labelling Extinction Rebellion as ‘so-called eco-crusaders turned criminals’ who adopt direct action as ‘a shameful attack on our way of life, our economy and the livelihoods of the hard-working majority’. She also described Black Lives Matter demonstrations in 2020 as ‘dreadful’. During a radio interview on LBC on Friday morning, Patel was asked if she would be prepared to take the knee. ‘No I wouldn’t, and I would not have done at the time either,’ she replied. ‘There are other ways in which people can express their opinions, protesting in the way that people did last summer was not the right way at all … I didn’t support the protests. Those protests were dreadful.’

She continued: ‘We saw policing as well coming under a great deal of pressure from some of the protest. I don’t support protest and I also did not support the protests that were associated.’ As reported on the Justice Gap last week, the new police bill confers upon police the right to dictate start and finish times for public protests, and set maximum noise levels.

‘The proposals being rushed through put enormous and unprecedented powers in the hands of the state to effectively ban even peaceful protests,’ said Kate Allen. ‘If that happens, scenes like those this weekend will become more common. The UK cherishes its self-image as a place of liberty which values our rights to expression and assembly.  We mustn’t let the Government take this away.’

Gracie Bradley, director of Liberty, said the Bill would ‘facilitate discrimination and undermine protest, which is the lifeblood of a healthy democracy’. ‘They risk stifling dissent and making it harder for us to hold the powerful to account,’ Bradley continued.

Last week the police watchdog the HM Inspectorate of Constabulary and Fire & Rescue Services (HMICFRS) published its report (here) into the policing of major protests including Black Lives Matter and Extinction Rebellion commissioned by the Home Secretary.

According to the inspectorate, Extinction Rebellion protests in April and October 2019 cost £37m ‘more than twice the annual budget of London’s violent crime taskforce’. The report also flagged long-running demonstrations against the badger cull, against companies involved in fracking and against the construction of the high-speed rail line HS2

The report draws on a survey of over 2,000 people which found that ‘for every person who thought it acceptable for the police to ignore protesters committing minor offences, twice as many thought it was unacceptable’. ‘Having reviewed the evidence, our conclusion is that the police do not strike the right balance on every occasion,’ the inspectorate said. ‘The balance may tip too readily in favour of protesters when – as is often the case – the police do not accurately assess the level of disruption caused, or likely to be caused, by a protest. These and other observations led us to conclude that a modest reset of the scales is needed.’

The inspectorate made a series of recommendations including improving ‘the quality of police intelligence on protests, particularly intelligence about those who seek to bring about political or social change in a way that involves unlawful behaviour or criminality’; promoting live facial recognition technology; and reconsidering police and local authority powers and practices concerning road closures during protests.

The report explains that the police’s management of protest-related intelligence needs to improve, particularly relating to what it calls ‘aggravated activists’. One of the recommendations made in the report was for the development of a robust framework to allow the use of live facial recognition to improve police efficiency.

‘Aggravated activism’ describes the behaviour of individuals that ‘seek to bring about political or social change in a way that involves unlawful behaviour or criminality’. ‘High-level’ aggravated activism refers to activity using tactics to bring about ‘social or political change involving criminality that has significant impact on UK communities, or where the ideology driving the activity would result in harm to a significant proportion of the population’.

Inspectors call for the better co-ordination of police operations to target aggravated activists that travelled ‘significant distances’ to attend and speak at demonstrations, through ‘disruption of travel, arrest, and co-ordination of bail conditions would likely have reduced their criminality’.

Netpol, the police monitoring group, called the report ‘a genuinely alarming public call for the disruption of entirely lawful activities’ and it ‘provides a green light for a renewed expansion of surveillance on political and social movements’.