‘Even when people know their rights, enforcing them is another matter’

‘Even when people know their rights, enforcing them is another matter’

Maryuri Arboleda lives with her partner, their seven year old son and 15 month old twins, in a one-bed flat in Southwark. The five of them sleep in the living room and have turned the bedroom, the smaller of the two rooms, into a lounge. ‘My son is seven years old. He needs his own space to do his homework and watch movies,’ she says. Jon Robins reports

Last week the couple successfully challenged Southwark council arguing that it had wrongly applied the test for statutory overcrowding as set out in the Housing Act 1985, section 326.

They first put their name on the housing list back in June last year so that they could move out of their cramped rented one-bed into social housing and to a flat that was more suitable for a growing family. ‘We have tried everything we could to move. I knocked on many doors, went to many organisations and they all said the same thing,’ she tells me. ‘We kept being told that they wouldn’t do anything unless we were homeless. It was very frustrating.’

Statutory overcrowding defined under the Housing Act 1985 is calculated according to either the ‘space standard’ or the ‘room standard’. These calculations look at the number of people, their ages and gender, and the number of rooms or size of the rooms they are occupying. More here.

Currently there are about 1.15 million people on waiting lists, only 290,000 social homes were made available last year and more than a quarter (27%) have waited for over five years. More than half of households waiting are currently living in overcrowded or unsanitary housing – see here.

Maryuri’s partner is a facilities coordinator for Virgin and she gave up her job in a shop to look after the twins. Their tiny second floor flat is not only too small for the growing family, it isn’t suitable. Maryuri struggles to lug her double-buggy up and down two flights of stairs and, when she does, she has to leave one of the twins at the bottom of the flight of stairs. She has been to the doctor because of her back problems and was referred to the Maudlsey hospital because of her depression. She likens living in the flat is being like ‘a mice in a box’. ‘We all live in the same room. I was so stressed that my hair was falling out,’ she says. As a result of the challenege the family has been moved from band 3 to band 1. 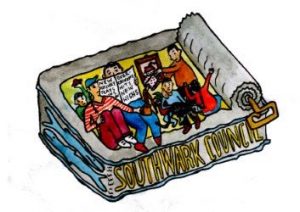 The successful challenge was brought by the Lambeth Law Centre’s Public Interest Law Unit and Housing Action Southwark and Lambeth (HASL). ‘Lots of families in the group are living in a single room, a studio flat or a one bedroom flat,’ explains HASL’s Izzy Koksal. ‘They can’t afford the high rents in the private rented sector for a suitably sized flat. To avoid street homelessness, they have to accept whatever they can find and whatever dodgy landlord will accept them.’

Koksal reckons overcrowding is ‘definitely much worse’ in the private rented sector because of ‘super high rents’ and discrimination. ‘Lots of members in our group say that the landlords they approach do not like that they have children or that they claim benefits – and also people, often migrant families, do not know their rights to access assistance from the council and the housing register. Even when people know their rights, enforcing them is another issue,’ she says. ‘As the long struggle Maryuri faced with Southwark council shows.’

Across the country, statistics show that overcrowding is worse in council housing than the private rented sector but, Koksal adds, ‘I think London is the reverse’.

Devastating impact
Helen Mowatt, a solicitor from PILU, explains that Southwark had wrongly applied the statutory test by assessing overcrowding solely by reference to floor area and not considering the number of rooms. She reckons that had they applied the test correctly, the Arboleda home would have been deemed statutorily overcrowded months ago.

Mowatt argues that this is not an one off error on the part of the council. According to freedom of information requests by HASL, Southwark have been consistently misapplying the law. The council only provided information going back to February 2018 and found that 46 banding decisions had been made which involved assessing whether a household was statutorily overcrowded and in all cases the test was applied incorrectly including 13 cases found not to be statutorily overcrowded. According to Mowatt these cases must now be reviewed. ‘[But] we are unclear as to how many households may have been affected before this date,’ she says.

HASL points out that the stautory test has not been updated since 1935 and Izzy Koksal calls it ‘outdated and ungenerous law’ with an  unfairly high threshold. The last Labour government accepted that the statutory test was ‘no longer defensible in a modern society’. ‘Yet in HASL we often meet families who do meet the definition of statutory overcrowding which shows how very severe the overcrowding is,’ she adds..

‘Austerity, the cuts and a lack of housing mean that local authorities do what they can to put people in the incorrect bands. A lot of people don’t know their rights. If they are told they are in band four, the lowest band, they might not question it,’ PILU’s Helen Mowatt continues.

Elizabeth Wyatt from HASL says that overcrowded housing has had a ‘devastating impact’ on people’s lives. ‘We have been raising the problem of overcrowding with Southwark council for years but the council have failed to engage and take meaningful action,’ she says.

‘Southwark council should be supporting their residents to access their housing rights and the secure council homes they need, instead it took a legal challenge before the council would accept that it had been wrongly denying that our families were statutorily overcrowded,’ she says. Together with PILU, we will be making sure that the council goes back to review all previous decisions and applies the law correctly for all future cases.’

Coronavirus, overcrowding, mutual aid and legal battles
The European Court of Human Rights rules against…
Supreme Court rules against government in 'bedroom…
Conviction of mother who killed violent boyfriend…
Over 40 traders to be relocated as Latin Quarter development