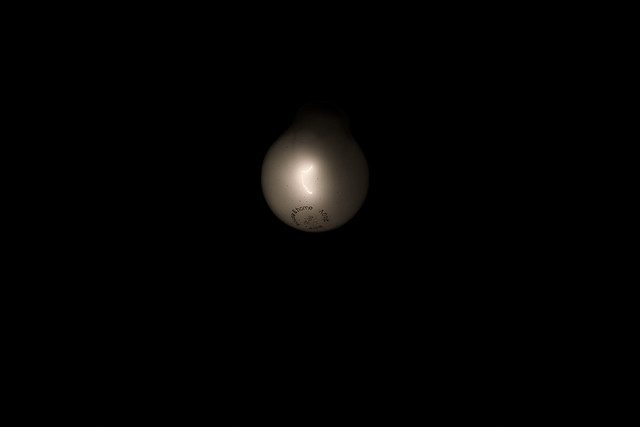 Since March, and especially since June, when quarterly tribunal statistics released by the Ministry of Justice revealed 79 and 83% falls in the number of employment tribunal (ET) claims in the third and fourth quarters of 2013/14 – that is, in the six months up to 31 March 2014 – there has been no shortage of comment on, and analysis of the reason(s) for, this dramatic decline. Any number of lawyers, journalists and bloggers have analysed the ET claim statistics by type of claim (singles, multiples, and multiple claimant cases), by regional ET office, and by jurisdiction.

This extensive comment and analysis has demonstrated that, by any measure, claims of all types and in all major jurisdictions are down, and down by substantial margins. And there is little, if any, dissent that this is due entirely to the hefty, upfront tribunal fees introduced in July 2013.

Indeed, both the right-wing Institute of Economic Affairs and the BIS minister, Matt Hancock MP, have trumpeted the fees regime as ‘a policy which has worked’. Hancock even going so far as to jest that ‘the only work being hit by our tribunal reform is the workload of employment lawyers’.

Yet some of those we might reasonably expect to take a close interest in such matters appear not to have been paying any attention to all this comment and analysis. Take the Business Secretary, Vince Cable.

As the government minister responsible for law and policy on employment rights and their enforcement, Dr Cable will surely have wanted to keep abreast of developments in the ET system since July last year. And he has had officials, advisers and a junior minister, Jo Swinson, to help him in that task. Yet last week, during the Second Reading of his Small Business, Enterprise & Employment Bill, the Business Secretary expressed an astonishing degree of ignorance about what has been going on, as revealed by the official statistics.

Responding to an intervention by Labour MP Debbie Abrahams, who noted that the overall number of ET claims has decreased by 80% since the introduction [of fees], Dr Cable said:

‘Yes, I am aware of a substantial fall in numbers. There are several reasons, which we are currently investigating, one of which could be connected with fees. Another reason is that earlier legislation sought to introduce an arbitration mechanism through ACAS as a first port of call. As I am sure that the honourable Lady will realise when she studies the figures, there has been a very big increase in the number of cases going through Acas, as I recently discussed with its chair. That is exactly as we wished; to ensure that we headed off a legalistic process and that people were able to remedy their disputes in a more successful way.’

Apparently, it has so far escaped Dr Cable’s notice that the system of early conciliation by Acas to which he was referring did not come into force until 6 April 2014, so did not play any part in the dramatic fall in ET claims in the months leading up to 31 March. We can only hope that this crucial fact will yet be unearthed by the Business Secretary’s ongoing investigation. Or perhaps Jo Swinson or someone else in BIS could just have a word.

And then, earlier this week, my attention was drawn to an article in The Times (£) by the paper’s long-serving legal editor, Frances Gibb. Headlined ‘Uncapped payouts make sex bias cases a growth industry’, this breathlessly announces that ‘sex discrimination claims are now the biggest growth industry among workplace lawsuits because of uncapped compensation, experts say’.

WTF? Hidden amongst all this evident evisceration of ET claims, there is not just a growth industry, but several growth industries?

Yes, according to Gibb, ‘while other kinds of tribunal claims are falling, a total of more than 13,700 sex discrimination claims have been lodged in the past year compared with 10,700 two years ago’. And, in case this clincher of a statistic is not considered sufficient to justify the article’s dramatic headline, Gibb goes on to quote Darren Isaacs, of law firm GQ Employment Law:

‘The cost of the fees is deterring many disgruntled former staff from pursuing claims, especially where the value of the prospective compensation is limited. But with no upper limit on the compensation that can be awarded for a discrimination claim, litigants still think it worth making such claims as the pay-out could far outweigh the cost and inconvenience of the tribunal fees.’

Now, I’m not sure what kind of skills set you must possess to become legal editor of The Times, but I’m guessing it doesn’t include ‘ability to do basic research’ or ‘ability to do basic sums’. Because, whilst there were indeed 13,722 sex discrimination claims in 2013/14, no fewer than 10,003 (73 per cent) of those claims were made in the four months prior to the introduction of fees on 29 July 2013. In contrast, in the final six months of the year (i.e. October to March), there were just 2,103 such claims.

In short – and which could have been ascertained from a couple of minutes spent searching the internet – the trend in sex discrimination claims since July 2013 has been at least as sharply downwards as in ‘other kinds of tribunal claims’. And, whilst there may have been a rising trend in early 2013, such claims are currently no more a ‘growth industry’ than are replica World Cup 2014 England shirts.

Gibb does not get around to telling us what the other ET claim growth industries are – sex discrimination is just the “biggest” one, remember – but for any other research-averse legal correspondents considering an exploration of Gibb’s theme, here are some handy charts covering the main discrimination jurisdictions. These show the number of such claims in each month from January 2012 to March 2014.

And it’s fairly easy to spot the ‘growth industries’ – there aren’t any. 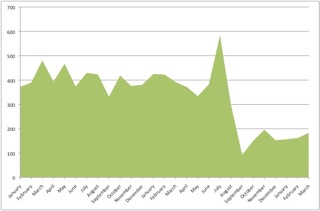 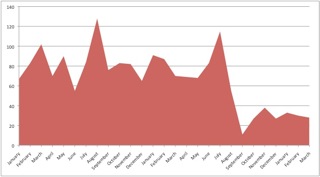 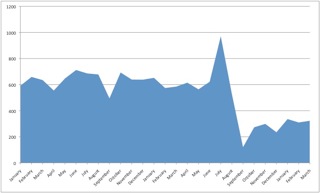 One response to “ET fees & dodgy stats: Ignorance is bliss”