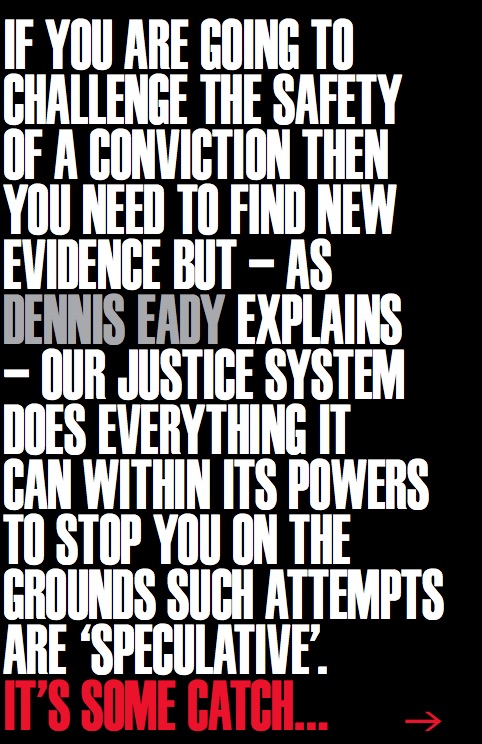 The appeal system was set up to ensure that if new evidence arises it could be appropriately considered. But, Dennis Eady notes, there are plenty of systems in place to ensure that no such evidence ever surfaces

Yossarian: Ok, let me see if I’ve got this straight. In order to be grounded, I’ve got to be crazy. And I must be crazy to keep flying. But if I ask to be grounded, that means I’m not crazy anymore, and I have to keep flying.
Dr ‘Doc’ Daneeka: You got it, that’s Catch-22.
Yossarian: Whoo… That’s some catch, that Catch-22.
Dr ‘Doc’ Daneeka: It’s the best there is.
Joseph Heller, Catch 22 (1961)

Catch 22 is at the heart of our appeal system. We are not allowed to re-run trial evidence because we are obliged to employ the ‘doublethink’ (to borrow from another novelist with authority issues George Orwell) of believing that juries can never get it wrong, when we surely know that they can.

In the experience of the innocence project at Cardiff University, there are invariably gaps in the paperwork available, some of which may be due to post-trial moving/storing/mislaying of papers between solicitors and others. Furthermore experts that we consult frequently suggest that we need disclosure of exhibits or additional paperwork in order for them to comment on aspects of the cases.

This is not speculation – it is simply what is required to do a fair and reasonable job for our clients.  Most of our requests for disclosure, whether directly to the police, CPS or within CCRC applications have not resulted in disclosure being made. A couple of examples of recent responses from police forces may be of interest in showing how the Catch 22 mind-set is alive and well when it comes to resisting disclosure.

In the first case the paperwork available to us is very limited yet concerns are apparent that could only be resolved by disclosure of certain reports. These include some witness statements, unused schedules and other investigation records, post mortem reports and photos. These are all items that are frequently disclosed pre-trial and should already be in the case papers.

The response to our request, which was made via a solicitor, was brief, quoting a ‘duty of confidence to those who have given information for policing purposes’ and suggesting that disclosure would breach the Data Protection Act 1998 or the Human Rights Act 1998. If these Acts are breached by post-trial disclosure it is hard to see why pre-trial disclosure of such materials does not? Despite utilising the Human Rights Act to deny our client his human right of fair disclosure the police stated that they ‘would like to assist’ and suggested:

This generous gesture was unfortunately in the realms of absurdity, given that most of the documents requested were written by the police themselves.  Furthermore of those that were not, the age of the case meant that trying to track down witnesses would be almost impossible to do, not least because in most cases we lacked the names of who they were.

In the second case, which involved a death in a fire, experts we consulted felt that the information available to them was lacking and we required some of the original fire reports that were missing along with the original photographs. The police took a different approach in this case and decided that:

‘Where some or all of the information can be withheld under one or more Freedom of Information Act (FOIA) Exemptions, requests would be dealt with under FOIA.’

We had not made a Freedom of Information Act request, just a straightforward request for disclosure to assist our work, but nonetheless treating the request that way provided the opportunity to deny our client freedom of information by applying the exemptions within the FOIA. Never let it be said that the British police lack a sense of irony.

Needless to say, there has been a long and complex exchange of argument on this matter. The police argued that information released under the FOIA would have to be disclosed to anyone who requested it and it might therefore be upsetting to the victim’s family and would reveal sensitive police investigation practices to potential criminals. We responded by pointing out that we were in this case requesting objective scientific fire reports not sensitive police files and that the likelihood of the victim’s family or any others making similar requests was to say the least remote – we do work to strict confidentiality protocols. Moreover we stressed that we did not wish to use the FOIA and that was purely a device used by the police to deny freedom of information. The argument goes on but we have little chance of success.

Real prospect
Of course there needs to be some limit to what might be spent on funding endless enquiries into clearly irrelevant issues, but as the Open Justice Charter suggests why should someone who is deprived of their life and liberty not have access to the records of the procedures that have put them there? In the digital age there is even less excuse for denying this.

Why should people maintaining wrongful conviction in an inherently fallible system not be able to test the evidence against them by scrutiny of the investigation, the social context of the witnesses and the validity of the science? There is surely enough evidence from the sad history of wrongful conviction for us to know that these things can and sometimes do go wrong, and to know that the wrong can very rarely be righted without rigorous re-examination of the evidence. Moreover that this re-examination does require ‘thinking out of the box’ and following many avenues that may lead to dead ends but may also be the only hope of finding something new and significant. Without fishing expeditions we will not catch any fish; without expert shopping we will never discover new potentially more enlightened scientific explanations.

Post-trial disclosure is one of the keys to overturning wrongful convictions. The 2014 Supreme Court ruling in the case of Nunn epitomised the Catch 22 problem. Paragraph 30 of the Nunn judgement refers to the Attorney General’s Guidelines on disclosure (2013):

‘Where, after the conclusion of proceedings, material comes to light that might cast doubt upon the safety of the conviction, the prosecutor must consider disclosure of such material.’

The Nunn judgement considers this position ‘properly stated’ with the addition that ‘if there exists a real prospect that further enquiry may reveal something affecting the safety of the conviction, that enquiry ought to be made’ (paragraph 42).

So what is a real prospect? In the Nunn case this was defined very conservatively indeed. It seems that the key discovery has to be known about before any testing can take place. There is no concession to the fact that enquiry and scrutiny in itself sometimes discloses the unexpected revelation. It does suggest that the CCRC ‘does not, and should not, make enquiries only when a reasonable prospect of a conviction being quashed is already demonstrated’ (paragraph 39).

There are two problems with this position. Firstly it is of no help to those who are not eligible to apply to the CCRC because they have not been able to launch an appeal without help to find new evidence to do so.  (You need disclosure to find new evidence for an appeal; the CCRC can do that for you, but only if you have already had an appeal.Yes, it’s some catch that Catch 22).

Those who have been rejected by the CCRC are in the same position. Secondly the experience of many applicants is that the CCRC are not always very keen to use their disclosure obtaining powers and, as research by Professor Caroline Hoyle suggests, the Court of Appeal/CCRC are particularly loath to consider police misconduct or poor legal representation as grounds for appeal.  Consequently the CCRC may feel there is little point in seeking disclosure of items which might ‘merely’ throw questions upon the investigation.

Resistance to disclosure remains one of the greatest obstacles to justice and to systemic integrity, yet in the light of examples ranging from the tragic case of Sean Hodgson (discussed in the Nunn judgement without a trace of irony) to Hillsborough, the authorities should surely be aware that cover-ups make things so much worse in the long run. The Jeremy Bamber case is perhaps the mother and father of illustrations of this resistance to disclosure (see www.jeremy-bamber.co.uk). After more than 30 years, the preferred option is to leave a potentially innocent man on a full life sentence rather than simply disclose material that could potentially exonerate him.