A crucifix hangs on the wall of a cell on Benbow wing inside HMP/YOI Portland ©prisonimage.org

I’d like to thank Philip Davies MP for providing the inspiration behind this post. I rarely have anything positive to write about Mr Davies and his grim obsession with punishment and trying to imprison virtually anything that moves, but on this occasion he has proved helpful, albeit unintentionally.

Last week the new Lord Chancellor and Justice Secretary, Liz Truss, appeared before Parliament’s Justice Committee and made a complete nitwit of herself. I’ve already written a pretty scathing review of her appalling performance for Politics.co.uk (read here), so I don’t propose to repeat myself. However, I do want to explore one particular exchange between Ms Truss and Mr Davies on the subject of conjugal visits for prisoners.

Sex in prisons seems to be one of Phil the Punisher’s personal fixations and this is not the first time he has raised the issue. On this occasion he enquired of Ms Truss whether her views on prison reform extended to emulating ‘the Danish model’ in which serving inmates are permitted to enjoy conjugal visits with their partners? Perish the very thought.

However, listening to this bizarre exchange raises the question as to why Conservatives in particular (and most British politicians in general) are so opposed to the very idea of conjugal visits in prison, given that there is widespread acceptance of the idea that maintaining strong family ties can play an important role in reducing reoffending? Particularly for prisoners serving long sentences, it can be very difficult to keep intimate relationships alive across the decades when physical contact is either limited to a quick kiss at the beginning and end of a closely supervised visit, or else is prohibited altogether.

Prisons in the UK do acknowledge this and many already provide so-called ‘family days’ when visiting takes place in a much more relaxed environment than usual and privileged prisoners are permitted to wear their own clothing, as well as move around the visits hall and play games with their children for most of the day. Some prisons even lay on a buffet lunch. However, this is still a very far cry from permitting any kind of sexual contact between prisoners and their partners.

Chastity by regulation
Occasionally some form of illicit sexual activity does occur during visits in closed prisons and then there are the predictable headlines in the tabloids voicing outrage, while trading on their readers’ appetite for titillation. However, for the vast majority of prisoners any kind of sexual relief occurs back in the cell when they are on their own, despite Mr Grayling’s misguided efforts to impose chastity by regulation.

Yet across the world, the very idea of denying prisoners conjugal visits seems absurd. Both Australia (limited to two states) and Canada have permitted such visits for years. South Africa is currently debating the issue in a bid to reduce the prevalence of rape in prisons.

As Mr Davies rightly observed, Denmark also permits conjugal visits. However, so do Finland, Norway and Sweden, so why the Danes were particularly singled out by Phil the Flogger is unclear. Perhaps he just subconsciously liked the rather suggestive phrase ‘Danish model’.

Moreover, France, Germany, Spain, Romania and Russia all permit some categories of prisoners to enjoy conjugal visits by spouses or partners, as do India, Israel, Turkey and even Iran, Qatar and Saudi Arabia (in the three last cases for married heterosexuals only). Further afield, Brazil and Mexico also allow for such visits, although in the USA only a handful of states permit conjugals (while no federal penitentiaries do). In the vast majority of cases such visits are offered as a privilege that must be earned through good behaviour. In Canada, those inmates who qualify are offered up to 72-hours of family life in a special apartment within the prison walls every couple of months. 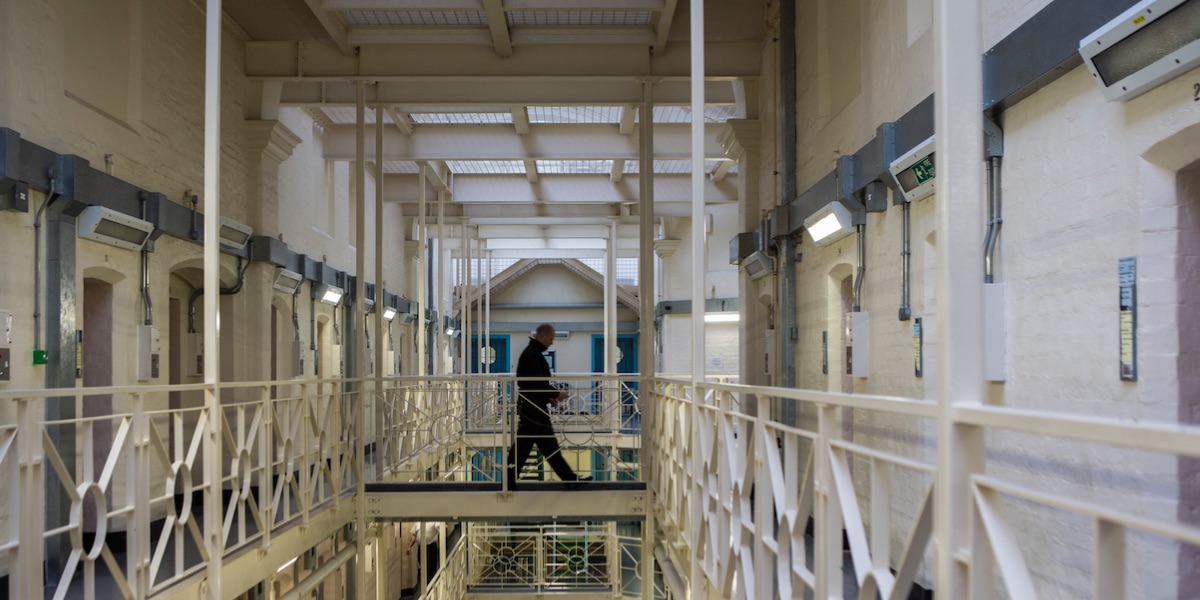 In November 2014, a report undertaken by the European Prison Observatory (a project funded by the Criminal Justice Programme of the European Union) reviewed the issue of conjugal visits for prisoners across EU member states. It recommended that those countries where such facilities are currently banned should consider providing them. Needless to note, such liberal ideas were ridiculed by the rabid tabloids and rejected swiftly by politicians in government.

Doubtless one of the main concerns would be how to sell such a radical shift in prison policy to the general public – the so-called acceptability test. The current Conservative stance appears to be driven in part by a fear of seeming to be soft on prisoners and part by a general resistance to allowing those in the state’s custody to behave like normal adults, rather than naughty children. There is probably also a sizeable dollop of faux morality and prudishness over anything and everything sexual. Hence Grayling’s Victorian-era attitude to masturbation (and any other type of sexual activity) in our prisons.

Of course, back in the UK open prisons (Cat-D) do – effectively – allow some serving prisoners to have sex, but this occurs when they are outside the prison boundaries having been granted a period of Release on Temporary Licence (ROTL). Inmates on day ROTL sometimes check into local hotels or B&Bs with their spouses or partners for a few hours of intimacy. One enterprising wife used to collect her husband at the prison gate in their camper van and head off to a secluded rural location for the day.

Those prisoners allowed three or four days of home leave can obviously avail themselves of the comforts of their own beds, shared with their spouses or partners. All of which can play an important role in strengthening family relationships, as well as preparing an inmate for an eventual return to normal life on release. The value of home leave for family members, who will also have to make major adjustments to their own lives often after many years of separation, should not be overlooked either.

While I was in Cat-D, one of my own room mates (no cells in open conditions) had a young son who had been conceived during the single day release he had received before being returned to closed conditions earlier in his sentence. He was serving an indeterminate sentence for public protection (IPP) and was already six years over tariff on a 24-month minimum. The fact that he had a child by his girlfriend had changed his life.

Now he was back in open conditions for a second attempt. As he told me, he now had a family and a future that was worth living for. Had he had neither, he confided that he might well have opted for suicide given the open-ended nature of his sentence. (He has since been released as a completely free man, having won his appeal and seen his ludicrous IPP quashed by the Court of Appeal).

Blue rinse brigade
So could conjugal visits ever take place within prison walls in the UK? The obvious answer, of course, is yes, although it seems unlikely that such momentous reform would be initiated by a Conservative administration, particularly one as deeply divided as Theresa May’s government. It would take a combination of bravery and common sense to broach a sensitive subject that would doubtless cause the window nets of blue-rinsed matrons and red-faced colonels to shake from Tunbridge Wells to Bognor Regis.

In view of the current crisis in our prisons fuelled by overcrowding and under-staffing, there would also be resourcing issues to consider. If there aren’t sufficient prison officers to escort prisoners to work, exercise, education or the library, what chance of establishing special units equipped for conjugal visits? And what of the risk of drugs and violence?

However, the benefits in British prisons could be significant. Firstly, one of the main criticisms of the current Incentives and Earned Privileges (IEP) system is that even the highest level – Enhanced – offers little genuine incentive to behave. However, if one of the privileges on offer included the prospect of occasional conjugal visits, then gaining and keeping Enhanced might become a real incentive for many prisoners, especially those serving longer sentences.

Secondly, beyond the simple issue of incentives, there are other positive advantages, as repeated studies of prison systems in other countries indicate. There is evidence that conjugal visits do support rehabilitation. Other countries seem to recognise that maintaining family ties means far more than weekly phone calls, letters and even face-to-face visits across a table in an enormous, noisy visits hall.

It can also involve physical intimacy, shared confidences in a safe environment, discussions of difficult issues involving children or in-laws, sharing a joke, cooking a meal together and reconnecting as human beings who plan to live a shared life again after release. These are tangible things that can all contribute to the successful rehabilitation of ex-offenders and their reintegration back into the community at the end of a custodial sentence.

Rather than sniggering in front of the Justice Committee and laughing at Mr Davies’ ‘Danish model’ quip, Liz Truss might do well to consider what she really means by ‘prison reform’ and rehabilitation. At the moment there is a very real suspicion that she just doesn’t have a clue. Treating the incarcerated – and their partners – as human beings, with a range of normal human needs, including a desire for sexual intimacy, would be a very good start. It would also doubtless drive Phil the Flogger ‘apoplectic’ (his own word) and that would be fine too.

‘An erect penis must be attended to…’

The prohibition can be found in annex B of PSI 30/2013: ‘Acting with decency at all times remembering prisons/cells are not private dwellings (this includes not engaging in sexual activity)’.

The ban was presumably sneaked in through a change to the annex of prison rules as opposed to the rules themselves (or legislation) to avoid debate and indeed ridicule.

‘Of course people have sex in prison,’ said another prisoner (Ryan). ‘Why wouldn’t they? We’re still human beings. Those feelings don’t go away just because you’re banged up.’ Quite.

Covid-19: Pregnant women and young mothers to be…
Scrap prison sentences of under a year, say MPs
Slaying the Tory dragons: first the EU, then its…
COVID-19: Corporal punishment in the United Kingdom
Part-privatisation of probation ‘irredeemably…