‘We changed the law to save children’s lives’

‘We changed the law to save children’s lives’ 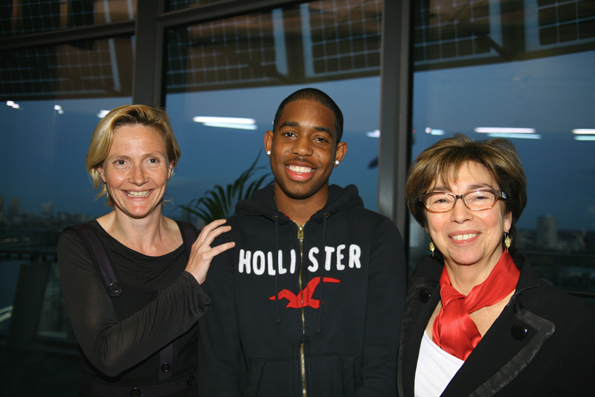 In April 2012, a few weeks after his 17th birthday, a sixth-former called Hughes Cousins-Chang and his friend were arrested on a London bus. They were handcuffed, cautioned and taken to Battersea police station, where they were strip-searched and detained for 12 hours. Hughes asked for his mother to be informed of his arrest. He was refused.

Carrlean Chang found out about her son’s arrest much later when police came to search the family home: ‘I was outraged that a 17-year-old was being treated as an adult,’ she said. ‘I felt helpless. My son was a boy. When he finally came out at 4am he looked so deflated.’ (No charges were ever brought against him).

Last year, Just for Kids Law worked closely with the bereaved families of two 17 year olds who took their own lives after being arrested on minor charges and held at the police station. Because of an anomaly in the law, 17 year olds did not have a right to adult support in police custody. Hughes Cousins-Chang had the courage to speak out about his ordeal and helped us to challenge government policy in the High Court.

In April last year, Lord Justice Moses ruled that it is unlawful for 17 year olds in the police station to be treated as adults, denied the protection afforded to younger children of having a parent or other adult with them.

The Home Office, which had rejected our arguments throughout the case, decided not to appeal the decision. Shortly after the judgment, the Home Office began implementing the changes that were required to enable 17 year olds to have adult support at the police station.

Still, the Home Office resisted correcting another dangerous anomaly. Children who are 16 and younger are not supposed to be kept in the police station overnight but should be moved to secure local authority accommodation. But 17 year olds were specifically excluded from this protection. This had to change.

Avoidable harm
Kesia Leatherbarrow was arrested on a Friday evening in December 2013 for breaking a window and having a small amount of cannabis. Kesia had a history of mental health problems, including self-harm and depression, but despite exhibiting concerning behaviour at the police station, she was held in a cell for two days and three nights. Because she was 17, the police would have been unable to transfer her to local authority accommodation where specialist staff could have looked after her.

On the Monday morning Kesia was taken to the adult court. The court said that since she was a child she should return the next day when the youth court was in session. Kesia was released with no one to meet her. Hours later, she was found dead.

I will never forget meeting Matt and Martina, Kesia’s parents, for the first time. Their palpable pain permeated the room that they had confined themselves to, with pictures of their beautiful daughter all over the walls.

We introduced Matt and Martina to the parents of Eddie Thornber and Joe Lawton, who had taken their lives in 2011 and 2012. After meeting and sharing their stories, the families agreed that they would work as a team to support Matt and Martina, together with Just for Kids Law, in trying to bring about the changes that were needed to ensure that vulnerable 17 year olds could not be detained overnight in the police station.

Home Office intransigence
We were lucky to have an excellent legal team from Doughty Street chambers, acting pro bono, and we kicked off the legal challenge by informing the Home Office that we would formally commence legal proceedings against them if they did not bring about the changes to the law.

The Home Office resisted all of our arguments, refusing to accept costs protection that Just for Kids Law had requested on the basis that we are small charity and, although our barristers were working for free, we could not afford to pay the Home Office’s legal costs.

We had been advised by others that the Home Office would be likely to accept the point in principle but that the change would not come about until after the next General Election, in 2015.

Bear in mind that this is the same government that wants to stop NGOs taking legal challenges altogether.

Delay costs young lives
We did not want to wait. History showed that this path was deadly. In early 2010 the then Labour government agreed to amend the legislation to include 17 year olds in the protections afforded to children at the police station.

Then came the General Election in May 2010, and the new government calculated that the changes would cost too much in a time of austerity. What happened next?

In 2011 Eddie Thornber took his life after receiving a court summons for possessing cannabis worth 50p.

In 2012 Joe Lawton took his life after being held overnight at Cheadle Heath police station in Greater Manchester without his parents’ knowledge.

We feared that further delay would cost lives. And we knew that the government had an easy opportunity to make a quick change before the year was out by amending the Criminal Justice and Courts Bill as it passed through the House of Lords. The Government had already amended the Bill so that 17 year olds are given adult support when they receive a caution, leaving the police station the sole remaining place where 17 year olds did not get the same protections as other children.

We are members of the Standing Committee for Youth Justice which pools members’ expertise to argue for a child-focused youth justice system. The Standing Committee provides effective advocacy for children and they prepared an amendment that would prevent 17 year olds from being held overnight in the police station. The Earl of Listowel (Francis Hare), a hereditary peer who sits as a cross bencher, presented it to the House of Lords at the committee stage of the bill in July 2014.

Lord Faulks, the Home Office spokesperson in the Lords, said that the government sympathised with the sentiment of the amendment, but the law in this matter was complicated and it would therefore need to be ‘properly thought through before change is made’.

At the report stage in October 2014 Listowel tabled the amendment again. This time Lord Faulks said the amendment, although ‘laudable in its aims’, represented a ‘too-hurried approach’ to the treatment of 17 year olds in the criminal justice system.

That’s when Kesia’s parents Matt and Martina came to us and asked if we could ramp up the campaign.

We prepared the case for Judicial Review, gathering statements from expert witnesses such as the National Appropriate Adult Network and youth justice specialists.  The Policing Minister, Mike Penning, agreed to meet Matt and Martina. He listened sympathetically. Change.org helped them to set up a petition demanding urgent change; in just five days nearly 30,000 people signed. Again we asked the  Standing Committee for Youth Justice if the Earl of Listowel would table an amendment at Third Reading, which wasn’t simple but they willingly agreed to try.

On Monday 10 November, Matt and Martina Baines had been due to deliver their petition to the Home Office. Instead, they sat in the public gallery of the House of Lords and heard the Earl of Listowel yet again press for the amendment.

He spoke about the children who had died.

‘Since 2010, three 17 year-old children have taken their own lives after being treated as adults by the police,’ he said. ‘They were Kesia Leatherbarrow, Eddie Thornber and Joe Lawton. It is worth taking a moment to think about what it means for a child to die in this way, the terrible waste and the pain that it causes those they leave behind. These children are much loved and deeply missed, and I should like to take a moment to read out some brief words of remembrance about each of them.’

Listowel related Nick Lawton’s word about his son, Joe: ‘He was a beautiful boy, everyone agreed. Joe was a happy, successful 17 year-old studying for his A-levels. He is missed every moment of every day.’

He quoted Eddie Thornber’s mother, Ann: ‘Eddie was head boy of his school, looking forward to studying in America. We would do anything to make sure Eddie was still with us.’

And Kesia’s mother,  Martina Brincat Baines: ‘Kesia was my only daughter. She was beautiful. A funny, lively girl who, despite her mental health issues, was loving and great company, she was so hugely loved and is so hugely missed.’

This time, Lord Faulks, on behalf of the government, accepted the amendment: ’17 year olds, as with 12 to 16-year-old children, must be transferred to suitable local authority accommodation’ rather than being kept in the police station overnight, he said.

The Earl of Listowel thanked the minister, the Home Office, Just for Kids Law, the Standing Committee for Youth Justice and the National Appropriate Adult Network, as well as the public law team at Doughty Street Chambers for their free legal work.

He said: ‘Great tribute must go to Martina and Matt Baines, the mother and stepfather of Kesia Leatherbarrow. Despite their terrible and at times overwhelming grief, they threw themselves into campaigning for what they think of as Kesia’s law. I also pay tribute to Jane and Nick Lawton, parents of Joe, and to Ann and Adrian Thornber, parents of Eddie… . Without the commitment of these extraordinary parents in their time of enormous loss, I do not think that the changes would have been made today.’

Just for Kids Law is a charity that provides holistic support and legal representation to vulnerable children and young people and drives systemic change through strategic litigation and policy reform. You can support their work by donating here.