Manifesto commitments to slash crime were ‘nearly always wrong’, according to a group of crime and policing experts published today. A new report from Sense About Science called on voters to remind politicians that ‘they’re wrong to take credit’ for falling crime when it has been on an international downward trajectory for years.

The charity, which seeks to promotes the better understanding of science, argues that all the big criminal justice policies of the main parties to cut crime – putting more bobbies on the beat (Labour), tougher prison sentences (Conservatives), tougher community sentences (Liberal Democrats) and deporting foreign criminals (UKIP) – were ‘misleading’. ‘They wrongly assume crime is a single phenomenon to be addressed by headline-grabbing measures, and ignore evidence on what works and what doesn’t in reducing different types of crime,’ the group says.
Crime was one of the top 10 issues people were concerned about in this election, said Chris Peters, director of the group’s Ask for Evidence campaign. ‘So it’s time for more realistic claims about its causes and remedies,’ he said. ‘Elections are when we hold those in power to account and that includes making sure people are telling the truth about evidence. The manifestos don’t do that so now researchers and the public are asking for it.’

The report was written by a group of experts including  Nick Ross, BBC Crimewatch and chair of the UCL Jill Dando Institute for Security and Crime Science; Prateek Buch of Sense About Science; Dr Alex Sutherland of RAND Europe; and Professor Daryl O’Connor, of the British Psychological Society.

‘Some journalists and politicians claim that high-profile measures are needed to cut crime, and that tackling the rate of crime is the most effective way of addressing the fear of it. But some of the most effective ways of reducing offending are simpler measures that rarely feature in the policy debate, such as targeted changes to street lighting, which have also been effective at reducing the fear of crime.’
Making Sense of Crime

Tough on crime
The group’s Making Sense of Crime guide flagged up the ‘persistent belief’ that national crime rates were rising when they weren’t (here, pdf). ‘When asked what they thought was happening to crime in the country as a whole, 61% of people said crime had risen in the previous two years, which contrasts with just 32% who thought it had risen in their local area,’ it said.

A sharp rise in crime between the 1980s and mid-1990s was ‘loudly trumpeted by the media and lamented by politicians’ who blamed the phenomenon on ‘falling moral standards to unemployment and video games’, according to the report. 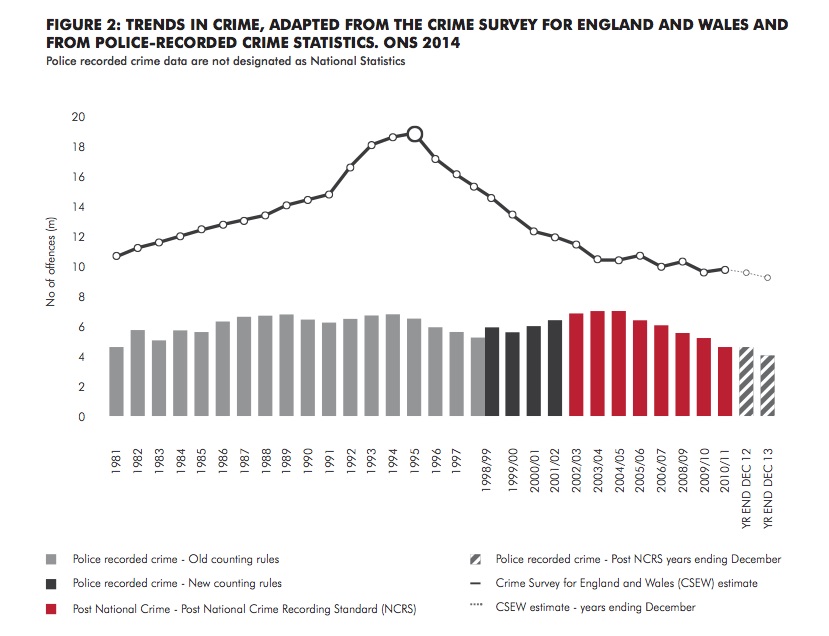 “Tough on crime, tough on the causes of crime” was the electoral pledge coined by Tony Blair, as shadow home secretary in 1993. That mantra set the tone for the language of political discourse around ‘law and order’. However crime began its fairly consistent downward trajectory back in 1995 in the UK and elsewhere. ‘It fell first in the US, where crime has been going down for around 25 years, then throughout the industrialised world, something no UK politician can claim credit for,’ the report points out.

The report quotes shadow Labour’s home secretary Yvette Cooper in 2012 (‘Our party worked so hard to help cut crime by 40 per cent when we were in Government’); the current home secretary Theresa May in 2013 (‘Under this Government, crime is down by more than 10%.’); and deputy PM last year (‘The continuing fall in crime is one of the biggest success stories of this coalition.’)

‘We all need to remind politicians that they’re wrong to take credit for crime going down when it’s been falling across wealthy.’
Making Sense of Crime