The report, Listening to Women in Police Custody, is due to be officially launched at IARS’ Annual Conference, Community-led Solutions to Crime, on 26 September 2012. 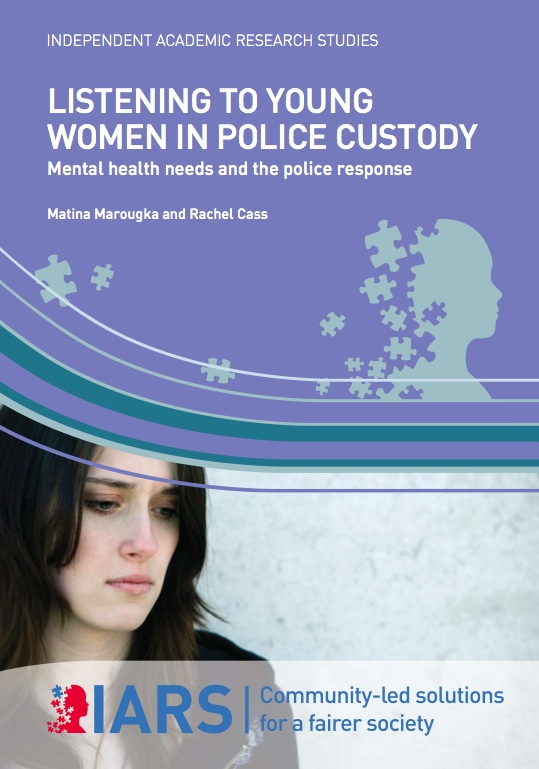 The year-long study, informed by a substantive literature review and in-depth interviews with 24 girls, all with experience of police custody, revealed that underlying mental health issues, a likely cause of offending behaviour, can go unnoticed and undiagnosed by officers. The 24 research participants, who were aged 16 to 25, were often victims of abuse and violence, suffered symptoms of depression and had a history of self-harming.

Academic research reviewed by the report found that that 71% of young women in youth offending institutions in the UK have mental health needs. In 2007, the government commissioned Corston Inquiry report on women in the criminal justice system, which drew attention to the prevalence of mental health issues amongst women who offend, and brought it to the fore as an important gendered issue for criminal justice policy.

Crucially, the IARS research suggests, spotting and addressing these underlying mental health issues at this first step in the criminal justice process could divert these girls to appropriate services, including counselling and rehabilitation, instead of leaving them with a caution and a high chance of ending up back in custody, or worse.

‘I was actually harming myself in [custody]… but because I was there for so long and it was stressing me out, I had to do something.’
An 18-year old interviewee

Despite progress made since the Corston Inquiry report, the research highlights inconsistencies in the questions asked to young women about their mental health needs and the levels of support provided. The research participants expressed the need to have appropriate opportunities to disclose their problems in confidence to female (as opposed to male) officers as soon as possible whilst in police custody. ‘If you sat down with a female officer talking to you and asking if you was alright, and she could find out a bit more about you and make your stay a bit more comfortable,’ said one interviewee.

Young women also expressed a desire to have their cultural or religious beliefs respected; one participant reported that her headscarf (worn because of her religious belief) was taken away from her, on the premise that it she may have used it to self-harm. In reality, the removal of it may have caused her more trauma.

Further, girls who ended up in custody for a second time rarely had their mental health needs checked. ‘When it’s your first offence they ask you if you’re alright and stuff but when you’re a repeat offender they just chuck you in the cell,’ said another interviewee.

The findings in this report are particularly timely within the context of the recent cabinet reshuffle and the replacement of Ken Clarke with Chris Grayling as the new Justice Secretary, who is widely reported as representing a shift to the right in criminal justice policy. The research serves to reinforce the importance of Clarke’s preventative approach to criminal justice, which aimed to achieve the most positive outcomes for offenders and those at risk of offending.

The findings of this research are perhaps just as interesting as the approach taken. IARS, an innovator in community-led action research, trained a group of 12 young female peer researchers to carry out the interviews with the research participants. This approach was crucial as it enabled the participants to talk about their experiences with someone they could relate to, enabling them to talk more openly and freely than perhaps possible with people easily indefinable as professional researchers. The young female peer researchers were trained to carry out the fieldwork by IARS with funding from the Big Lottery Fund.

The full report is available on the IARS website HERE.

'I’m afraid of being stuck here and I’m afraid of…
More than 100,000 vulnerable adults a year detained…
Seven out of 10 young adults think police will treat…
The number of prison deaths up by 70% over last three months
Covid-19 early release scheme for prisoners ‘mired…