Another battle in the culture wars

Another battle in the culture wars 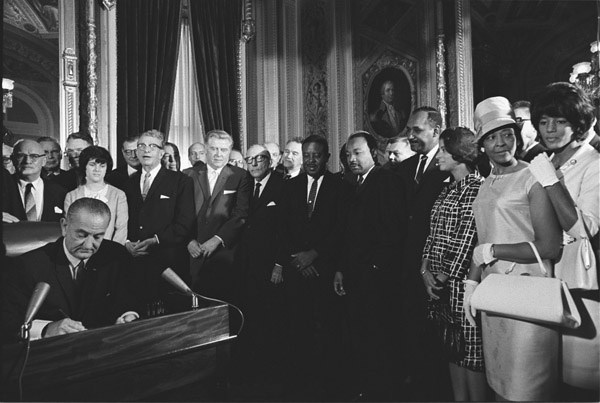 The high-water mark of America’s civil rights movement came in 1965, with the passing of the Voting Rights Act. Despite America’s abolition of slavery and the grant of equality and citizenship to black people after the Civil War and the Reconstruction period, bigotry and intolerance was still rife within America’s political culture, with black people’s participation in politics – most obviously through voting – deliberately checked by many states. States desperate to disenfranchise them constructed convoluted ways to ostracise them, encompassing restrictions such as poll taxes, literacy tests, or identification requirements. Such restrictions saw less than a third of eligible black voters registered to vote, and saw the return of desperately few black candidates to elected positions across America- particularly in the former Confederacy.

It was President Lyndon Johnson who sought to end this with the Voting Rights Act during the Second Reconstruction. Under the provisions of the legislation, any state counties with a long-established history of racially discriminatory voting practices were required to submit any changes to state voting laws to the federal government for ‘preclearance’. The Act had a dramatic impact on the rights of black voters, with over half of America’s black population registered to vote two years after it was passed, putting federal muscle behind the enforcement of voting rights.

Much of this muscle was torn away, however, by a decision of the US Supreme Court in 2013, who found that the continued federal supervision of states violated the US Constitution. According to the Court, this was no longer acceptable, and it decreed that the legislative requirements for preclearance had ‘no logical relationship to the present day’.

The decision flew in the face of reality. Evidence of racial hostility abounded – and abounds – in many states, particularly in the Deep South, while the Republican Party continues to be eager to disenfranchise black voters on the basis that they lean Democrat. Indeed, given the demographic trends in America, which show a declining white population and a rising black population, the Republican Party is faced with the choice of either trying to genuinely appeal to black voters or disenfranchising them, if it wants to remain electorally viable in the future. It seems determined to take the latter course. Yet despite the risk of this being distressingly obvious, Chief Justice John Roberts concluded that ‘times have changed’, and that by continuing to subject certain states to the preclearance requirement, the Voting Rights Act violated the principle that all states should be treated as ‘equal sovereigns’.

Inevitably, with this bulwark against discrimination at the polling stations ripped away by the Court, discriminatory laws surged forth. As Justice Ruth Bader Ginsburg said in her dissenting opinion, stripping away federal oversight because black people were no longer facing such extreme discrimination was like putting away your umbrella in a thunderstorm because you weren’t getting wet. Before the 2016 presidential election, the Brennan Center for Justice at New York University found that 15 states had imposed new restrictions on voting, while the bipartisan Commission on Civil Rights condemned Shelby County in a 2018 report. They found that by striking down the Voting Rights Act, 23 states had been able to enact ‘newly restrictive voting laws’, ranging from purging voter rolls (with some citizens told to use their right to vote or lose it) to imposing voter ID laws.

Defenders of such restrictions, their faces a picture of innocence, protest their good intent. Voter restrictions such as these, they claim, are not intentionally designed to disenfranchise minority voters, but to ensure the ‘integrity’ of elections. This is nonsense. Even if the motivation for many of the restrictive measures is not racial animus per se, directly targeting particular ethnic groups because they tend to vote for a particular party might be less morally abhorrent, but is no more legitimate. As Richard Posner, a conservative judge on the federal court of appeals, wrote, voter ID laws are a ‘mere fig leaf for efforts to disenfranchise voters likely to vote for the political party that does not control the state government’.

It would be easier for such defenders if there was even a modicum of evidence justifying their calls for security measures. Instead, they are forced to pitch their solution while desperately searching for a problem to match. In America, the Republicans continue to propagate the deluded notion that it was voter fraud that handed the White House to the Biden, rather than Trump’s demagoguery and xenophobia, but even the blatantly partisan audit into Arizona’s presidential vote counts- which includes a former legislator who was present at the storming of the Capitol in January – has struggled to find anything that could legitimately be labelled fraud. The Republican leadership knows this, but also knows that by continuing to peddle the lie that Trump was the legitimate winner of the 2020 presidential election, they foster further resentment among their base, deepening the ideological divide and binding conservative voters more tightly to the Republican cause.

In Downing Street, Johnson’s motivations for reforming the voting process are similar. There was no need for the Queen to announce that her government was going to bring forth legislation ensuring the ‘integrity of elections’ this week. Voter fraud in the UK is a fantasy. In 2019, there were 33 reported incidents of voter impersonation at a polling booth, all of which resulted in a single conviction. To put that in context, there were 58 million votes cast during the 2019 election. Given that there are 10 million people in the UK who do not hold a driving licence or a passport, and three million who do not hold any form of photographic ID, sacrificing the votes of 10 million people for a single case of voter fraud seems like a poor return on an investment.

Unlike the Republicans in America, the Conservative party does not face an existential threat from the UK’s changing demographics. But by framing the narrative around integrity, legitimacy and security, Johnson turns the issue of voter ID into another battle in the culture war that now dominates British politics – a war the Conservatives are comfortably winning. As the Hartlepool by-election showed, the party is more than comfortable with transforming itself to reflect the mood of the nation, even if it means appealing to a different subset of the electorate. This does not mean that the Conservatives will not benefit from any new voter ID restrictions, with the part of the electorate it will most harm particularly unlikely to ever vote for a candidate emblazoned with a blue rosette, but this electoral advantage is not the primary driver of the reforms.

Instead, it is the need to portray themselves as the party best placed to ensure the security and integrity of the nation that better explains the pursuit of voter ID restrictions. The Conservative party have abandoned their narrative of economic competence, and are now almost solely pitching themselves as the ‘defenders of British values’. It is in pursuit of this that the voter ID laws must be seen, alongside the other major proposals that featured in the Queen’s Speech, like the restrictions on protest and the attack on freedom of speech in universities, or the continued demonisation of immigrants and refugees. The government are trying to portray themselves as defenders of British heritage and British values. For those who oppose them, the challenge is to expose them as peddling a bigoted distortion of these values, that degrade rather than elevate Britain and its history.

'Denying prisoners the vote is a needlessly vindictive act'
REVIEW: Modern slavery is anything but 'modern'
Putin shows us appeasement does nothing but embolden those…
#BlackLivesMatter: 'Moments of global camaraderie are rare.…
Derek Chauvin: 'There was only one conclusion available to…