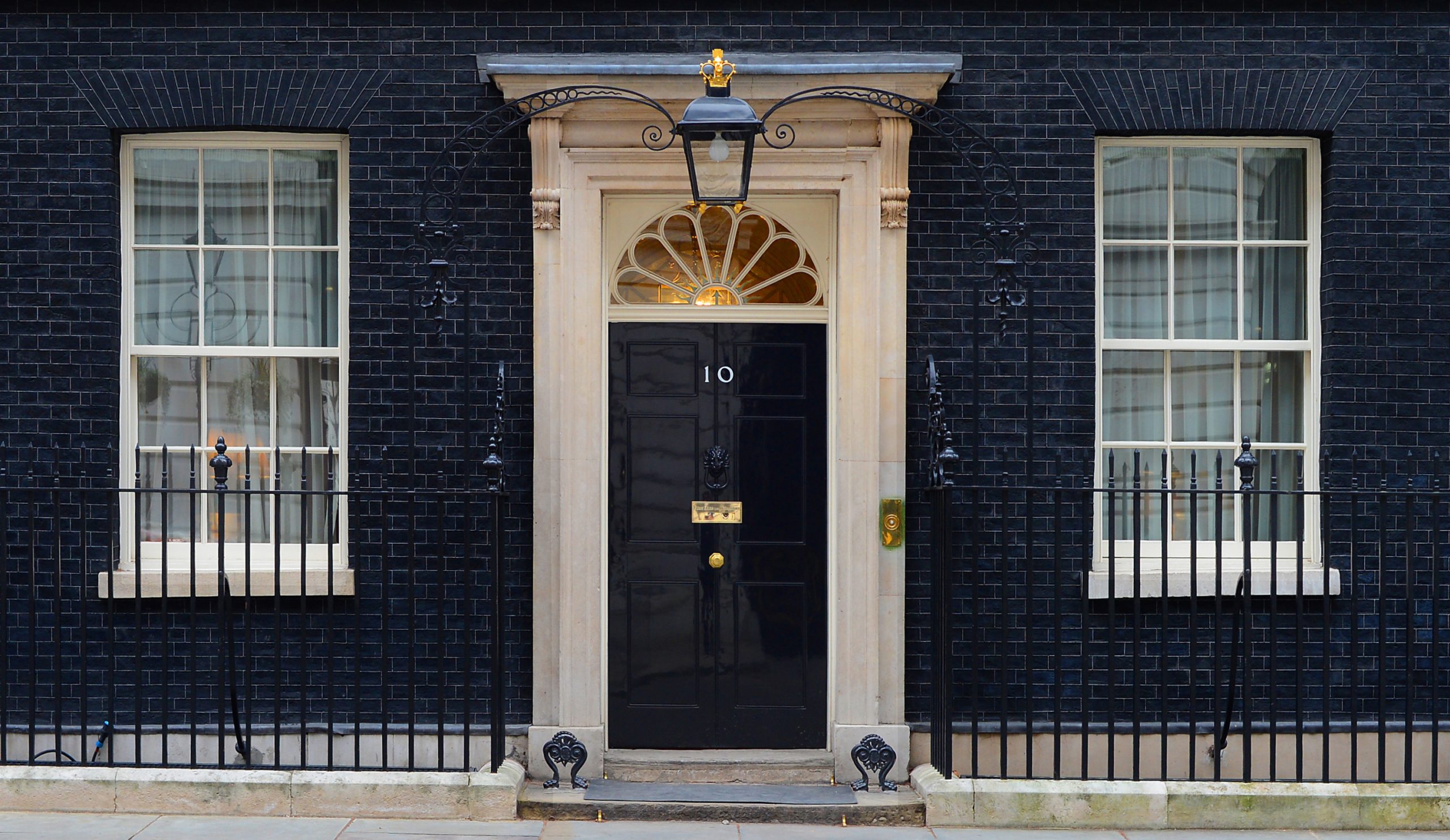 In the United States of America, presidential addresses to the nation are delivered from behind the bulk of the Resolute Desk in the Oval Office, the President flanked by a phalanx of flags. In France, the French president has the pick of gold-lacquered state rooms in the Elysee Palace from which to speak to the people, the tricolour lurking in the background. In the UK, we used not to have any such grandeur. Instead, should a prime ministerial address have been required, government aides would shuffle out, hastily wheeling a lectern, perhaps adorned with the coat of arms, perhaps left bare, into Downing Street. From there, amid the buzz of traffic from Whitehall, and vulnerable to the caprice of any passing seagulls, the British prime minister would speak to the nation, with only the famous black door of No. 10 hinting at the country he spoke for and to.

To a visitor, perhaps one also curious about why our head of government should reside in a cramped terraced house in a nondescript street off Whitehall, such banality may strike them as odd. Britain is the literal home of pomp and circumstance, and yet the prime minister lives in a flat ‘above the shop’, with not even a housekeeper provided to keep the dust mites at bay. We can safely assume that if Johnson had been handed the keys to the sprawling White House residence, with its permanent staff of ninety, a ‘John Lewis nightmare’ would not have been Carrie’s reaction, and he wouldn’t have been looking at a five-figure bill for gilded wallpaper.

For all of his supposed historical learning, Johnson’s actions in office reveal a man who has confused the role of a prime minister with that of a president. The construction of a vast briefing room, at considerable expense to the taxpayer, merely serves as a metaphor for how Johnson has sought to sideline Parliament throughout his premiership, seeking to project himself, absent the backdrop of Parliament, as the true – and only – representative of the people. Although he is not the first executive-minded occupant of No. 10, with Blair guilty of importing much of American-style government into British politics, he is the first to so unabashedly check the power of the legislature, using his overwhelming majority to render the executive immune from parliamentary scrutiny.

As the Constitution Unit has recently written, much of this has been done under the auspices of the pandemic. The ‘state of emergency’ has been used again and again as justification for rapid executive action. No longer do ministers dignify Parliament by appearing before MPs to announce changes in policy, with Matt Hancock preferring to outline the country’s route out of the pandemic before journalists in a briefing room off Whitehall than before his parliamentary colleagues in the chamber. Such exigency may have been justified at the pandemic’s outset, but the time for such urgency has long since passed, with the government’s policies, like the introduction of compulsory face masks or the green-listing of countries for travel, discussed, trialled in the media, and decided upon weeks or months before they take effect.

More often than not, Parliament is only invited to review the government’s actions long after they have taken effect. Using the ‘affirmative scrutiny’ procedure under the Public Health Act 1984, policies become law before they have been approved by Parliament, with formal legislative consent given weeks after the event. Not only does this render Parliament little more than a rubber stamp, forced to look helplessly on as the government makes – and changes – regulation after regulation, but it leads to incoherent law. The lack of parliamentary scrutiny has resulted in frequent errors being made in the statutory instruments passed during the pandemic, alongside, as the Bingham Centre has shown, constant confusion as to which policies announced by the government are law, and which policies are merely guidance or desired practice. It is confusion like this that has led to the police usurping power, lawlessly terrorising citizens acting well within the letter of the law, resulting in prosecutions for violating Covid-19 guidance being abandoned and fines wrongfully issued being set aside.

Throughout this time of emergency, Parliament has been forced to watch helplessly on, with the government controlling time for debates (it is worth noting that Johnson could find the time for MPs to spend seven and a half hours paying tribute to the late Prince Philip, but only five hours over the entirety of the last year for MPs to scrutinise the powers handed to the government under the Coronavirus Act 2020); the MPs’ participation in the debates, with some isolating MPs unable to speak in the chamber when virtual participation rights were terminated last May; and the amount of money it can spend under the Contingencies Fund Act, which vastly increased the government’s unilateral spending power when it was passed – once more with the most meagre of debate – last year.

But Parliament is not entirely helpless. There are parts of it that are capable of holding ministers – and other public figures – to account, and prominent among these parts are the parliamentary select committees. These are committees within Parliament, drawing their membership from the Commons, the Lords, or both, tasked with scrutinising the actions of the government, sometimes focussing on specific departments, like the Home Affairs Select Committee and the Home Office, and other times looking at broader matters of government, like the Joint Committee on Human Rights.

Much of their work is done through taking evidence from witnesses, who, in person or on paper, respond to questions from the committee members. Unlike a court, however, who can compel witnesses to appear and give evidence, the select committees have no meaningful way of forcing recalcitrant witnesses to appear before them. In theory, they have the power to issue fines and impose prison sentences, but, as a report published last weekend by the House of Commons’ Committee of Privileges has shown, this power is respected more in the breach. A fine has not been issued to a non-member of Parliament since 1666, while a sentence of imprisonment was last handed down in 1880.

Should a select committee decide to avail itself of such power, nor is it likely to bear much fruit. Modern democracies are less comfortable with legislatures being able to unilaterally impose sanctions, with any punishment unilaterally handed down by Parliament almost certainly contrary to the European Convention on Human Rights, as Daniel Greenberg, counsel to the Speaker’s Office, told the Privileges Committee. It is this absence of a meaningful sanction that has doubtless encouraged some witnesses to refuse to engage with a summons to give evidence, such as Dominic Cummings infamously refusing to give evidence last year.

It is the fear of more witnesses taking such an obdurate stance that led the Privileges Committee to conclude that legislation should be passed, creating a criminal offence for failing to comply with a select committee’s summons, which would be dealt with in the courts. Such a proposal is not without its own difficulties, however, with Article 9 of the Bill of Rights prohibiting the courts from scrutinising proceedings in Parliament. As Tom Hickman QC said in his evidence, there is concern that such an offence could ‘involve judicial scrutiny and second-guessing of parliamentary proceedings’.

It is the fear of this that led Joshua Rozenberg, in a piece earlier this week, that we should ‘do nothing’, and have faith that the fear of select committees ’empty-chairing’ unwilling witnesses will either compel them to appear, or, should they remain obdurate, trust that their absence will be a ‘more eloquent’ solution than dragging them through the courts. But this ignores the reality of 21st century politics, where individuals, whether tech titans like Zuckerberg or political advisers like Cummings, are motivated solely by what they can get away with. Rarely will the news of an individual’s refusal to appear before a select committee bother the front pages, or spark even a glimmer of public interest, the level of public interest in affairs of state should not be what determines the ability of select committees to fulfil their public function. As Johnson said last week, it is possible the public ‘don’t give a monkeys’ about his conduct and his feud with Dominic Cummings. That doesn’t mean he shouldn’t be held to account for it.

Using the Bill of Rights to justify ‘doing nothing’ is to ignore the fact that the constitution evolves. In the past, there was no need for the courts to intervene to compel witnesses to attend because Parliament had the power to defend itself against such recalcitrance. To do nothing is to accept the neutering of Parliament, and to suggest that while some parts of the constitution can evolve, other parts must be trapped in amber, left unable to respond to the exigencies of modern life. The principles enshrined in the Bill of Rights, important though they may be, are not immutable. If empowering select committees comes at the cost of minor judicial scrutiny, that is the cost that must be paid.

The country is faced with a power-hungry executive, one that regards norms and conventions as something to be railroaded rather than respected. While the courts are one solution to an overmighty executive, the power of the legislature to constrain the executive should not be neglected. Empowering select committees would be a small – but important – step in the right direction.

One response to “Accountability in a time of (constant) emergency”

'Like a gambler who knows the game is up but is…
Best of times, worst of times
Another battle in the culture wars
Coronavirus contact tracing apps and civil liberties
'America may have just witnessed an attempted coup,…