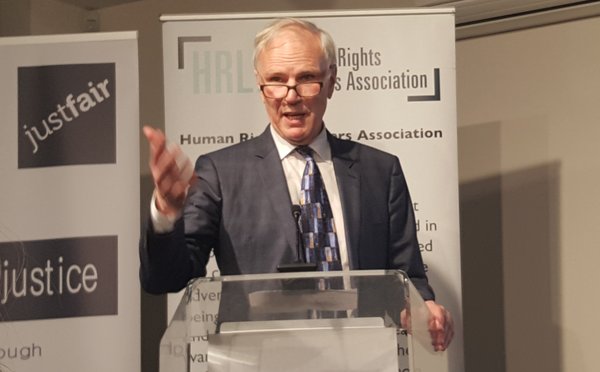 Human rights have been ‘fundamentally distorted and successfully stigmatised’ by tabloid newspapers and must be rehabilitated, according to the UN Special Rapporteur currently in the UK to investigate extreme poverty.

Professor Philip Alston made the comments to an audience at Doughty Street Chambers, London, on day nine of his two-week visit to the UK.

The UN Special Rapporteur on Extreme Poverty and Human Rights is here to carry out a formal country mission and has travelled around the UK examining issues such as austerity, welfare reform and child poverty.

Although he was unable to discuss his findings, Professor Alston said that one of the challenges facing human rights in countries such as the UK was the perception that they do not belong to ordinary people, but only to criminals or society’s most vulnerable.

‘Thanks to the tabloids and others, my dearly beloved compatriot Rupert Murdoch, human rights have been fundamentally distorted and successfully stigmatised so we all know that human rights are only for drug dealers and terrorists and criminals and sex offenders and I think that has highlighted for many of us in the human rights community the need to start rehabilitating the notion of human rights, to start emphasising what are in human rights for the average person and not just for particularly vulnerable groups,’ he said. ‘I think that’s going to be a long-term process.’

The Australian Professor of Law at New York University said he has found that ‘there’s a real awareness of economic, social and cultural rights’ in Scotland, but this is not the case in England.

‘[Scotland’s] First Minister spoke to me about them at great length with a real understanding of what was involved,’ he said. ‘There is a commitment to move towards sustained action… and you’ve got a society in which social rights really matter and people know what you’re talking about.

‘Down in the rest of the country, in England, it is not all that far from what I encounter in my own country, Australia, and that is a “for God’s sake, don’t talk about human rights, it’s not going to help”. I don’t really get a sense that in the UK people tend to think in terms of human rights language when it comes to their social justice entitlements.’

Having completed a country mission to the US at the end of last year, Professor Alston said he did not make many recommendations as ‘the main problem is simply denial of the existence of poverty’. The biggest difference though would be for Americans to view issues such as healthcare as human rights, he added.

‘The challenge for us in relation to social rights is to create what we have in civil and political rights. In civil and political rights, you should have a sense of outrage, so if someone is blatantly discriminated against because they are one particular colour or gender or if they are physically maltreated, we are outraged – ‘that’s no way to treat X’. We need that same sort of dynamic when it comes to social rights.

‘So, in the US, you know all these people have no healthcare, when they’re sick there’s nowhere to go, they’re just left to die. And there needs to be outrage at that. I think that is true in the UK situation. I think people are not getting enough food to eat and that should be a reason for outrage and I think it’s useful to see that from a rights perspective, but I think that’s going to take time.’

Professor Alston said he believes that ‘poverty is a political choice’ and a human rights issue – although others are uncomfortable about this.

‘Many people in the human rights field are not are necessarily convinced of that,’ he said. ‘Many of them do not wish to get into the issues because it does involve questions of redistribution, it does require a look at fiscal policy, it does require the evaluation of very sensitive issues of domestic policy.

‘My view is that to the extent that human rights proponents marginalise these issues, they are taking their eyes off the main game. This is in fact where so much of the real human rights policy is made… If you want to go down to the issues that affect the great majority of people, often it will be at the intersection of poverty and human rights.

Of the effects of austerity in the UK, Professor Alston said ‘clearly communities are feeling it’ and that he must evaluate the extent to which Government policies in the years following the financial crisis have impacted on this.

The Special Rapporteur said that, to his surprise, he had been told by one official that the UK had not experienced austerity because ‘Government expenditure in almost all areas has gone up steadily in the last 10 years’.

‘At which point I said ‘well, what are Philip Hammond and Theresa May talking about when they say they’re going to end this non-existent phenomenon?’ he added. ‘I didn’t get a particularly good answer to that.’

Although he has no formal powers to enforce his findings, Professor Alston said his role is about delivering ‘accountability external to the state’ and shining a light on issues to further discussion in each country he visits.

‘The assumption is that in none of our states can we simply believe that governments of the day are going to consistently recognise even really serious human rights problems when they exist,’ Professor Alston said. ‘So, when we have Australia’s delightful and highly innovative policy on asylum seekers, for example, the external criticism is of course pushed back but it nonetheless feeds into a very important process of domestic discussion.

He said it is common for people to ask what he is doing in their country and how he can consider himself to be an expert on its issues after just two weeks. During some of his visits, government officials have even turned to each other and asked ‘who invited this bastard?’ he said.

But Professor Alston said that his visit is preceded by many months of research and is not seen by him as a major intervention.

‘There is no such thing as the great breakthrough, nothing is suddenly transformative,’ he added. ‘It’s always just making these contributions and hoping that they will cumulatively make a difference.’

This article first appeared on Byline.com

Justice Matters launch: 'No return to the status quo'
ECHR rules against Switzerland for fining Roma woman for…
LAUNCH: 'A vital exposé of a justice system suffering from a…
European human rights watchdog warns UK of ‘backsliding on…
Raab promises to end ‘nonsense’ of Human Rights Act.