Heathrow 13: ‘Prison was something we were all prepared to do for the cause’

Heathrow 13: ‘Prison was something we were all prepared to do for the cause’

Today is the first day of a two week trial against the 13 Heathrow activists at Willesden Magistrate's Court. The activists were met by cheering supporters before heading in to their first day in court. Amongst the many supporters was Natalie Bennett of the Green Party. A brief statement was read out by Rebecca Holly Sanderson and todays hearing only expected to hear evidence from defendant Ella Gilbert. July 13 2015 13 climate activists staged a peaceful protest at Heathrow airport against a third runway and any further airport expansions.

INTERVIEW: As one of the Heathrow 13, Danielle Paffard had been expecting to spend her birthday yesterday behind bars. Thankfully, she found out on Wednesday that she and her fellow campaigners had been spared jail as a result of their high-profile protest against the London airport’s expansion.

‘I was all set to go to prison,’ Paffard tells the Justice Gap. ‘Finding out what you can and can’t take to prison is incredibly difficult. No blue and black clothes, apparently.’ On Wednesday morning she packed a bag, grabbed a book (‘An officer and a spy’), and headed off for Willesden Magistrates’ Court not knowing whether she be coming home or not. Fortunately Paffard – a veteran of numerous high profile actions – celebrated her 29th birthday a free woman.

‘Prison was something we were all prepared to do for the cause. Lots of our role models have done time for what they believe in,’ she says; before quickly adding that it was ‘a huge relief’ to find out they weren’t going to prison. As she puts it: ‘I could take my brave face off.’

The mark of a civilized community
The seven women and six men had been found guilty earlier in the year of aggravated trespass and warned by district judge Deborah Wright to expect a custodial sentence. This week Wright acknowledged the ‘integrity’ and ‘commitment’ of the campaigners and noted that they had acted ‘in what they genuinely believed was in the best interests of the public and society as a whole.’

The judge quoted a judgment of Lord Hoffman:

‘Civil disobedience on conscientious grounds has a long and honourable history in this country. …. It is the mark of a civilized community that it can accommodate protests and demonstrations of this kind.’

The protestors might have been ‘principled people’ Wright went on to say, but she added: ‘The fact that you are principled and have strong views about public interest doesn’t mean you can break the law.’

A sentence of 13 weeks was cut by over half, and suspended for 12 months, on account of the group’s good character and because safety measures had been taken. 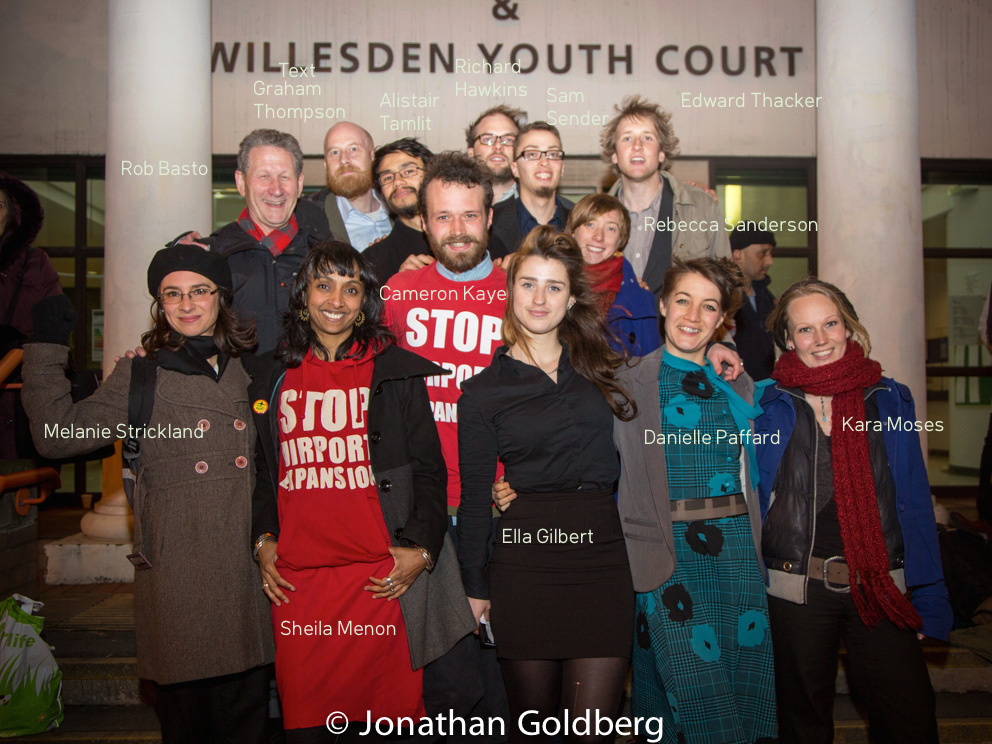 Sir Howards Davies, chair of the Airport Commission, published his report recommending a third runway for Heathrow on July 1 2015. Less than two weeks later, Heathrow police were alerted to suspicious activity around the airport’s perimeter fence at 3.45am. They arrived to discover discarded bolt cutters near a hole in the fence.

The protestors, who had themselves alerted the police, quickly built a tripod out of scaffolding poles and one of their number, Cameron Kaye, donned a white jump suit and, dressed as a polar bear, perched on top. 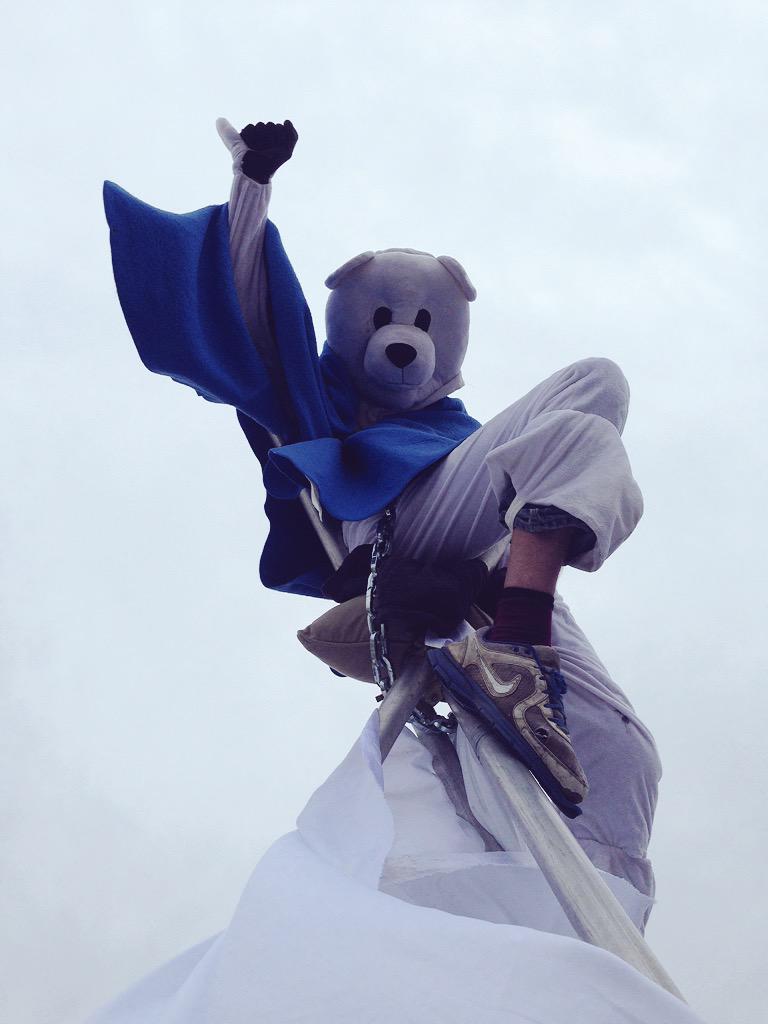 Why? ‘The idea was to stop planes and highlight the fact that a third runway was absolutely preposterous if you look at it in terms of the climate impact,’ replies Danielle Paffard, who as well as being a Plane Stupid activist is divestment officer at the climate campaign group 350.org.

Paffard claims a new runaway would ‘fundamentally undermine every policy that the government has made to take action on climate change’ and ‘makes a mockery’ of the 2015 Paris climate agreement.

‘The third runaway makes it impossible to meet the government’s own legally binding climate targets. This protest was about highlighting the climate impact of a runway that produces the same amount of emissions as the whole of Kenya.’
Danielle Paffard

Binge-fliers
On the day of the protest 25 of the 1,300 flights due to take off and land at Heathrow had to be cancelled.

What does she say to those families who had saved up all year for their fortnight in the sun? ‘We unreservedly apologise to those who were disrupted on the day with good reasons to travel,’ she answers.

But Paffard reckons that airport expansion is nothing to do with ‘normal people taking their annual holiday’. ‘We are seeing an expansion as a result of wealthy minority who binge-fly,’ she says. ‘It’s 15% of people who take 70% of all of the flights in the UK. The majority of the British public did not fly at all last year.’

Paffard became politicised after the 2009 Copenhagen climate change conference. ‘I was increasingly frustrated by what I saw was an absolute political failure to move on the issue. By feeling frustrated letdown and angry – as well as a strong sense of injustice – I began campaigning.’ Since then, she has been involved in campaigns including UK Uncut, Move Your Money and No Dash for Gas, taking part in a series of direct actions including ‘oil spill’ demos with Liberate Tate protesting against sponsorship of the arts by BP, anti-fracking camps with Reclaim the Power and a week-long camping trip in a power station chimney.

Such actions are easy to dismiss as stunts, so do they change anything? ‘Direct action has been such an important tool in all our progressive movements from the suffragettes to civil rights,’ says the activist, who has two previous convictions for aggravated trespass related to her campaigning. ‘It is a critical part of all the positive change that we have had.’

These demos work because that they are ‘so visceral’. ‘People are putting their bodies on the line, and the fact that they’re willing to make that sacrifice speaks for itself,’ Paffard says.

Whilst she is involved in ‘big direct actions every few years’, she points out that the protestors are involved in other forms of campaigning through, as she puts it, ‘legitimate and legal channels’. ‘But sometimes it is just not enough,’ she says. ‘If you see a loved one sleepwalking towards a cliff, you have to interject.’

In November 2012 as part of the No Dash For Gas campaign Paffard was one of a group of 16 who scaled a 300 foot chimney at West Burton power station in Nottinghamshire to protest about the building of new gas-fired power stations in the UK. The action forced French owners EDF to switch the power off which was claimed to have stopped the emission of 19,117 tonnes of carbon dioxide.

It doesn’t sound very safe. ‘It would be absolutely contrary to what we believe in as peaceful protesters to cause harm to anyone else,’ she says. ‘We were pretty lucky. On those chimneys there is a back-scratcher ladder that goes up the side. It’s not an easy climb especially with a week’s worth of food, water and sleeping equipment for November. It isn’t easy but it isn’t unsafe.’ The group camped out on a five-foot wide maintenance ledge. Paffard  is scared of heights. ‘It was quite hairy,’ she says. Not to mention the financial and legal risks. EDF threatened them for £5 million.

‘EDF backed down,’ says Paffard. She draws a parallel between that and this week. ‘When the state or corporations are seen to come down very hard, the public does respond,’ she adds.

The long and honourable history of disobedience
Paffard talks of ‘a cultural heritage’. ‘There is the British sense of rooting for the underdog,’ she says.

In their legal fight, the Heathrow 13 attempted to rely on a defence of necessity in that they were – in their words – ‘compelled to act to prevent death and serious harm to people, by stopping flights and therefore stopping carbon emissions which cause lethal climate change and deaths linked to air pollution which can be attributed to Heathrow’. They had argued that 31 people a year die prematurely around Heathrow due to pollution, and thousands as a result of the effects of climate change.

It is very rare that such a defence is used – and hardly ever successfully. Twenty years ago the Ploughshare 4 walked free after a Liverpool jury found them not guilty of criminal charges despite an admission that they did more than £1.5m worth of damage to a Hawk warplane. The Hawk was destined for Indonesia to be deployed against the people of East Timor.

‘The courts have recognised, at the highest level, the “long and honourable history in this country” of ‘civil disobedience on conscientious grounds’.  So too have juries,’ explains Mike Schwarz, a partner at the law firm Bindmans LLP that represented a number of the Heathrow 13.  ‘Juries have, over decades, acquitted anti-weapons campaigners – for example, the Trident Ploughshares – environmentalists opposed to coal-fired power stations – such as Greenpeace – and those opposed to genetically modified crops.’

But, Schwartz argues, in response to ‘democratic citizen power’ and juries acquitting activists, the State appears to have increasingly sought to limit direct action and punish grassroots campaigners’.  ‘The treatment of ‘the Heathrow 13’ by the judge in the magistrates court is just the most recent example of this trend,’ he adds. 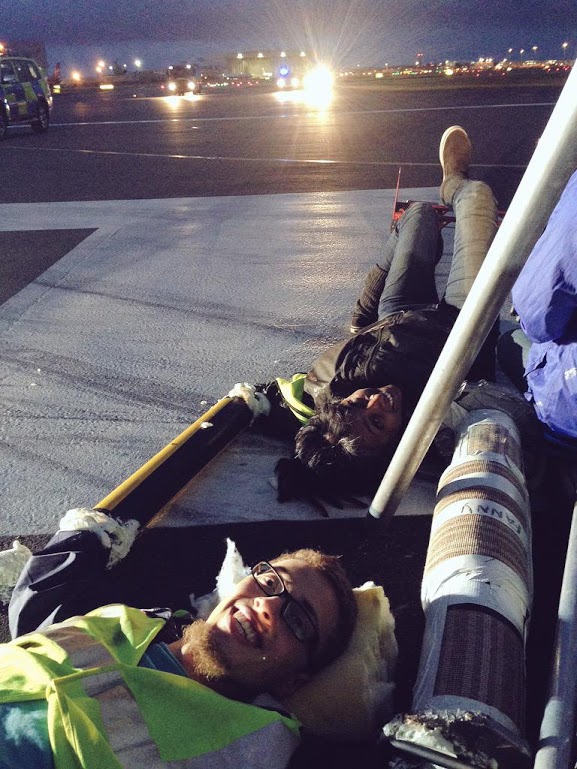 As Paffard explains, their legal argument did not work because they could only claim that they were acting to prevent ‘generic death’, rather than ‘specific death’. ‘Because of how climate change happens, you cannot attribute a molecule of carbon to a particular cyclone, famine or drought,’ she says. ‘I think that says more about how our system has not been able to process climate change as a problem.’

Whilst Paffard readily admits that they broke the law, she argues that Heathrow ‘already produces illegal levels of pollution’. ‘They break the law all the time. If they build a new runway they will have three times as much air pollution and they will be breaking the law knowingly by doing that. The same applies to the government: they cannot build a third runway; and stick to their legally binding targets. We broke the law too, just in different way.’

Heathrow and the attack on 'undemocratic judicial activism'
Episode 8: 'No case to answer'
Mothers and babies join protest against UK imprisonment of…
More than 400,000 people are locked up pretrial every single…
Appeal judges to review whole-life sentences