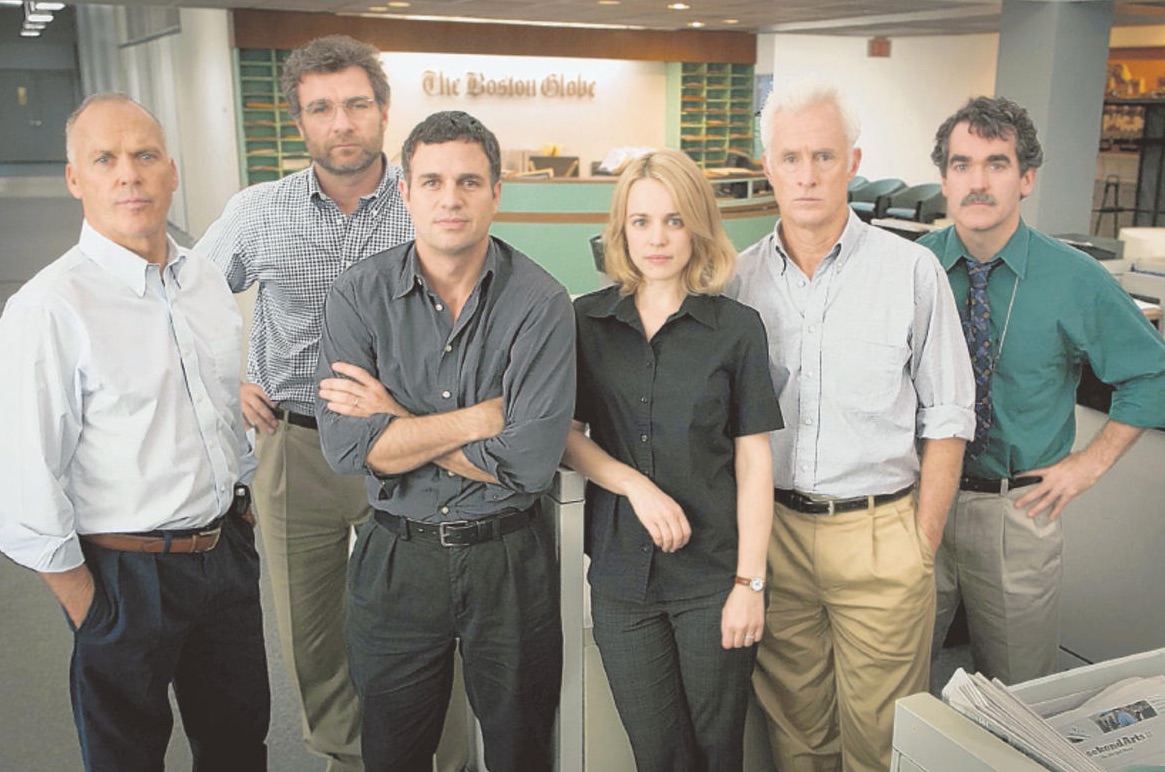 Spotlight, which recounts the battle of reporters on the Boston Globe in 2000-2002 to expose a decades-long child abuse scandal in one of the world’s richest and most powerful Catholic dioceses, could not be more topical.

Only a few days ago Peter Saunders, a clerical sexual abuse survivor who has been highly critical of the Vatican’s response to recent scandals, was forced to take a ‘leave of absence’ from the Vatican’s abuse commission.

In the same week, the Vatican reiterated its long-held opposition to mandatory reporting of abuse. These developments suggest that the Catholic Church’s unwillingness to face up to its own failings on child abuse is as strong as ever.

Spotlight is a brilliantly watchable drama, and more nuanced than I expected. It eschews easy caricatures. The film shows how Boston was so dominated by the Catholic Church – the protective blanket for generations of Irish immigrants to America – that even good people became complicit in the cover-up.

As a character in the film observes: ‘If it takes a village to raise a child, it takes a village to abuse one.’ As the film unfolds it becomes apparent that the Boston Globe had itself been culpable: in 1993, a victims’ lawyer sent the Globe a list of 20 priests guilty of child abuse, but rather than investigate, the Globe decided to bury the story. That only changed when an outsider- a Jewish editor, newly arrived from Miami- came on the scene.

To what extent does Spotlight mirror events in the UK? There are certainly parallels.

The Catholic abuse scandal hit the headlines in England at almost exactly the same time, in 2000, when the then Archbishop of Westminster, Cormac Murphy-O’Connor, was accused of having moved a paedophile priest, Father Michael Hill, from parish to parish to cover up complaints of abuse – a pattern echoed in Catholic abuse scandals worldwide.

Like the journalists in Boston, lawyers in the UK who sued the Church also learned how to identify possible euphemisms for paedophile priests in the annual Catholic directories – ‘on sick leave’, ‘c/o Bishop’s House’ etc .

Of course, nowhere in England does the Catholic Church wield the political power it enjoyed in Boston or Southern Ireland. But in England just as in Boston, fear of the Church meant victims were easily silenced. As Graham Wilmer, a victim of abuse by a priest of the English Salesian Order explains:

‘I was totally in awe of priests. I believed that if I said anything I would burn in hell for evermore.’

For decades, child-abusing priests were quietly shifted from one parish to another and victims discouraged from going to the police. This is a powerful film with many lessons. For me, three stand out.

The first is that high quality investigative journalism has been central to exposing child abuse scandals – in this country as much as in the USA. Worryingly, this resource-intensive journalism, where stories are pursued doggedly over many months (or in the case of the abuse scandal in Boston, over 2 years), is in retreat, a victim of cost cutting in the shift from newspaper and TV to the Internet.

Spotlight shows graphically why investigative journalism matters, and why its decline should trouble anyone who cares about the accountability of powerful institutions.

Secondly, as happened in Boston, legal cases have helped to expose institutional culpability, but the legal system has important limitations – in England probably even more than in the USA.

One such limitation is the restrictions imposed here on use of discoverable documents, which, as litigators will know, are generally disclosed solely for the purpose of the litigation and usually cannot be shared publicly, even where they contain material of significant public interest.

When writing Betrayed, my book on the Catholic abuse scandal in England, there was much more that I would have wished to share but could not, as it was information I only knew from disclosure provided by the Church in the course of litigation.

We might imagine we have open justice, but far too often we don’t.

There are other problems with the legal system. In particular, artificial and unrealistic time limits for civil claims continue to provide powerful institutions with unwarranted protection from legal accountability. The Scottish Parliament is considering abolishing time limits for institutional abuse claims in Scotland – a sensible and long overdue change – but in England we remain trapped in archaic limitation laws which too often frustrate justice.

The third lesson? If Spotlight proves anything, it’s the urgent need for legal sanctions to prevent cover-up of child abuse in institutional settings. In short, we need mandatory reporting. In Boston, as in so many other places, fealty to an all-powerful institution took precedence over the protection of children. Ultimately, nearly 100 paedophile priests in the Boston diocese were brought to book. But only after decades when so many in the Church knew what was happening but kept it hidden. This is an all-too-familiar story.

What hope can there be to challenge this omerta when men like Cardinal Bernard Law – the prelate who presided over this scandal – are rewarded by the Pope with promotion to a sinecure in Rome instead of facing criminal penalties for covering up abuse. Mandatory reporting laws have been vehemently opposed by the Catholic Church – something which will come as no surprise when you’ve seen Spotlight. But the time for reform has surely come.

Richard is head of the abuse team at Slater & Gordon, and author of Betrayed: The English Catholic Church and the Sex Abuse Crisis, published by Biteback books

Our print magazine is Proof. Contributors include Michael Mansfield QC, Bob Woffinden, David Rose, Eric Allison and Ian Cobain.
Buy Proof Magazine
The latest issue (Why legal aid matters) includes Helena Kennedy QC and Martha Spurrier in conversation, David Conn on the legacy of Hillsborough - plus how to build your own law centre.
Richard is head of the abuse team at Slater & Gordon, and author of Betrayed: The English Catholic Church and the Sex Abuse Crisis, published by Biteback books

Police ‘shut down’ Janner investigation without pursuing all…
Reporting of fatal domestic violence 'seriously inadequate',…
Barristers call on ministers to make legal aid available in…
More than 4,000 allegations of historical abuse have led to…
Why pre-charge anonymity is fair