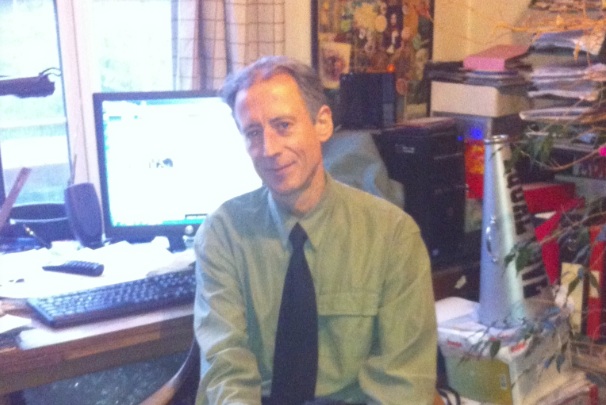 INTERVIEW: Peter Tatchell is a busy man. When I arrive at his council flat in Elephant and Castle on a Saturday afternoon, he is rushing around in a coat eating his ‘first meal since yesterday afternoon’, dealing with an urgent enquiry from a Russian asylum seeker who has just been detained at Yarl’s Wood Immigration Removal Centre, and approving a press release about Nelson Mandela.

‘I run on a 24 hour clock,’ he shouts from the kitchen, before apologising for the ‘mess’ in his flat as he clears a space for me to sit among the mountains of books, leaflets, placards, and rainbow-coloured flags. ‘I could have bought this place for £15,000 in 1996, and now it’s worth £200,000’ he tells me, as I survey my surroundings. Why didn’t he? ‘Because I don’t believe in buying social housing,’ he says. ‘That’s a big sacrifice isn’t it?’

Invariably described as ‘provocative’, ‘unpredictable’ and ‘uncompromising’, Tatchell is best known for his relentless campaigning for the rights of lesbian, gay, bisexual and transgender (LGBT) people.

He recently lent his support in Save Justice’s campaign against the government’s proposed further legal aid cuts because he fears that they will lead to an increase in miscarriages of justice. ‘It’s really important that justice is open to everyone, regardless of circumstances,’ he tells me. ‘These changes will diminish the ability of people who are not on big incomes to get the best legal representation and to mount a proper, adequate legal case.’

Surely some cuts are necessary in this, the ‘age of austerity’, though? ‘It’s astonishing to think that David Cameron and his Lib Dem partners are pursuing cuts in public services that even Margaret Thatcher dared not make,’ Tatchell responds. ‘It’s being cloaked with the justification of plugging the deficit and fixing the economy, but it’s completely bogus.’ He goes on to list five examples of how the government could get Britain out of its financial fix, including cancelling the Trident nuclear missile program, which, he says, would save about £100 billion over 40 years; closing tax avoidance loopholes, which would raise £20-30 billion; and placing a ‘wealth tax’ of 20% on the richest 10% of the UK population, which, he tells me, would raise a ‘staggering’ £800 billion. ‘Quite clearly, the legal aid cuts, and other cuts to public services, are not necessary,’ says Tatchell.

A lifelong skeptic of authority
Tatchell is no stranger to speaking up for the underdog. Born in Australia to evangelical christian parents in 1952, he undertook his first campaign aged 15 – against the death penalty. ‘I’d previously developed something of a social conscience around the age of 11,’ he says. ‘I saw news reports about the bombing of a black church in Birmingham, Alabama. Four young black girls my own age were killed by white racists. I remember being utterly horrified that anyone could kill another person, let alone four young girls at church on a Sunday.’

Fast forward four years, and Tatchell became interested in the case of Ronald Ryan, who faced the death penalty for allegedly shooting dead a prison warder during an escape at a jail in Melbourne.

On reading the autopsy report in the local paper, 15-year-old Tatchell worked out that it would have been almost physically impossible for Ryan to have fired the fatal bullet, and so got involved in the – ultimately unsuccessful – campaign to try and save him. ‘The execution of Ronald Ryan destroyed my faith and confidence in the government, police and judiciary,’ says Tatchell. ‘It made me a lifelong skeptic of authority and opened my mind to other injustices. I thought, “if they can hang a possibly innocent man, what else are they doing that’s wrong?”’

Tatchell left Australia for London in 1971 in order to avoid conscription to the army for the Vietnam War, which Australia was involved in. ‘I objected to the war so I wasn’t prepared to comply in any way with the system,’ he tells me.

Within five days of arriving in the UK, he joined the Gay Liberation Front, which campaigned for the complete decriminalisation of homosexuality across the UK and against homophobia by the church, media, and other institutions. He later co-founded the gay rights group OutRage!, whose campaign tactics included ‘outing’ 10 Anglican bishops, threatening to ‘out’ dozens of MPs and invading the Archbishop of Canterbury’s sermon on Easter Sunday 1998 to protest against his support for anti-gay discrimination. Much of the media at the time viewed OutRage’s campaign tactics as extreme. ‘I thought they were quite moderate,’ laughs Tatchell. ‘We never planted bombs or threw ourselves under the Queen’s horse. We did think about it, though.’

OutRage’s ‘outing’ campaign was ‘not about people in the closet’, he hastens to add. ‘It was about public figures who were abusing their power and influence to attack and harm gay people when they themselves were gay,’ he tells me. ‘So it was about hypocrisy and homophobia. There were bishops and MPs we didn’t ‘out’ because they weren’t being hypocritical or homophobic.’

How did he react when the Daily Mail labelled him a ‘homosexual terrorist’ and The Sunday Times ‘public enemy number one’ following the ‘outings’ then? ‘I was rather proud. Proud and flattered,’ he says. ‘It shows that I really needled the establishment. I got under their skin and stung them where it really hurts.’

‘An example to us all’
The tables turned in 2001, however, when the Daily Mail declared Tatchell ‘heroic’ and ‘an example to us all’ after he was left permanently brain-damaged following an attempted citizen’s arrest of Zimbabwe’s president, Robert Mugabe, on charges of torture.

How did that come about? ‘I got a tip-off that President Mugabe was going to be attending a meeting at the Hilton in Brussels and then go on to meet the Belgian Prime Minister,’ says Tatchell. ‘So I lay in wait in the lobby of the hotel pretending to look at merchandise in one of the gift shops.’

When Mugabe and his bodyguards entered the lobby, Tatchell ‘feigned being a stupid tourist and walked straight into the middle of his entourage’. He got within about three feet of Mugabe before he was ‘jumped on and then eventually beaten unconscious’.

Tatchell’s injuries from the Mugabe incident are permanent – he has problems with his memory, concentration, balance and coordination, and had to have an implant fitted in his right eye to help improve his sight. Surely he must regret attempting to arrest one of the world’s most vicious dictators? ‘Sort of, as it’s left me with some brain and eye injuries,’ says Tatchell. ‘But, on the other hand, what happened to me is nothing in comparison to what’s done to human rights activists inside Zimbabwe.’

Does he feel resentful of his attackers? ‘It’s hard to feel angry because I’ve always known what they’re capable of. If anything I feel lucky that I got off so lightly.’ Tatchell’s brain injuries were exacerbated by a further attack by neo-nazis at a Gay Pride march in Moscow in 2007, where he was ‘beaten almost unconscious in full view of Moscow police officers’, who subsequently arrested him ‘while allowing my attackers to walk free.’

The cumulative effect of the Mugabe and Moscow attacks, together with an incident in London in the 1970s when Tatchell was beaten up by the National Front, meant that he was forced to step down from the Green Party in 2009, despite having been selected by the party to run for Oxford East.

That wasn’t Tatchell’s first brush with politics – in 1983 he stood as a Labour candidate in the Bermondsey by-election and lost out to current Lib Dem deputy leader Simon Hughes MP. The local liberals ran a homophobic smear campaign against Tatchell. ‘The general consensus is that the Bermondsey by-election was the dirtiest and most violent election campaign in Britain in the 20th century,’ he tells me, before describing the hate attacks he was subjected to, including death threats, bricks through his windows, an arson attempt and a bullet through his front door. ‘There were four fascist candidates standing against me,’ says Tatchell. ‘They and the liberals ran a very underhand, dirty campaign, playing on the fact that I was gay, born in Australia and left-wing.’ Tatchell knew that Hughes was also gay, he tells me, but thought that ‘outing’ him would be ‘an immoral tactic’.

The Save Justice postcard campaign, to which Tatchell is a signatory (see pic), is calling on the Liberal Democrats to halt the proposed further cuts to legal aid, following their near-unanimous vote to do so at conference earlier this year. ‘It’s quite shocking that the Liberal Democrats, who supposedly stand for liberal values, are going along with such an illiberal measure,’ he says.

A bulwark against tyranny
Tatchell hasn’t returned to party politics since stepping down from the Green Party in 2007. He instead works full-time as the director of the Peter Tatchell Foundation, an independent human rights organisation. What do ‘human rights’ mean to Tatchell? ‘The principle is that all human beings everywhere have human rights and that no political system or faith should be allowed to undermine those human rights,’ he responds, almost without pausing. So what are his thoughts on the government’s recent attacks on the Human Rights Act, and its threats to withdraw from the European Convention (ECHR)? ‘It would be utterly bizarre for Britain, which helped establish the ECHR, to seek to undermine it or withdraw from it,’ says Tatchell. ‘It has been the vehicle by which many British citizens have sought redress from state violation of their rights.’ He goes on:

‘The Human Rights Act is probably the most significant and important piece of legislation passed in Britain in the last half-century. It is a bulwark against an overbearing, tyrannical state, it is much-needed, and it deserves strong defence.’

By the end of our conversation, Tatchell is visibly tired – he is yawning and his eyes are starting to flicker. He works seven days a week round-the-clock – in the last year he has ‘probably had two or three days off and maybe four or five evenings‘ – and, although he recently started paying himself a salary from the Peter Tatchell Foundation, for over 30 years he lived on about £8,000 a year from odd bits of journalism and research. At 61, I wonder if retirement is on his mind. ‘Retirement?’ He laughs drily. ‘That would be boring.’

With 46 years of campaigning under his belt, and a run-in with Mugabe that forced even the Daily Mail to do a u-turn, just what is it that keeps Tatchell going then? ‘My rather crazy idealism,’ he says with a smile. ‘And my dream that the world we live in can be better than it is.’

For more information about the work of the Peter Tatchell Foundation, visit www.petertatchellfoundation.org