Why I challenged the police over ‘kettling’ protesters

Why I challenged the police over ‘kettling’ protesters 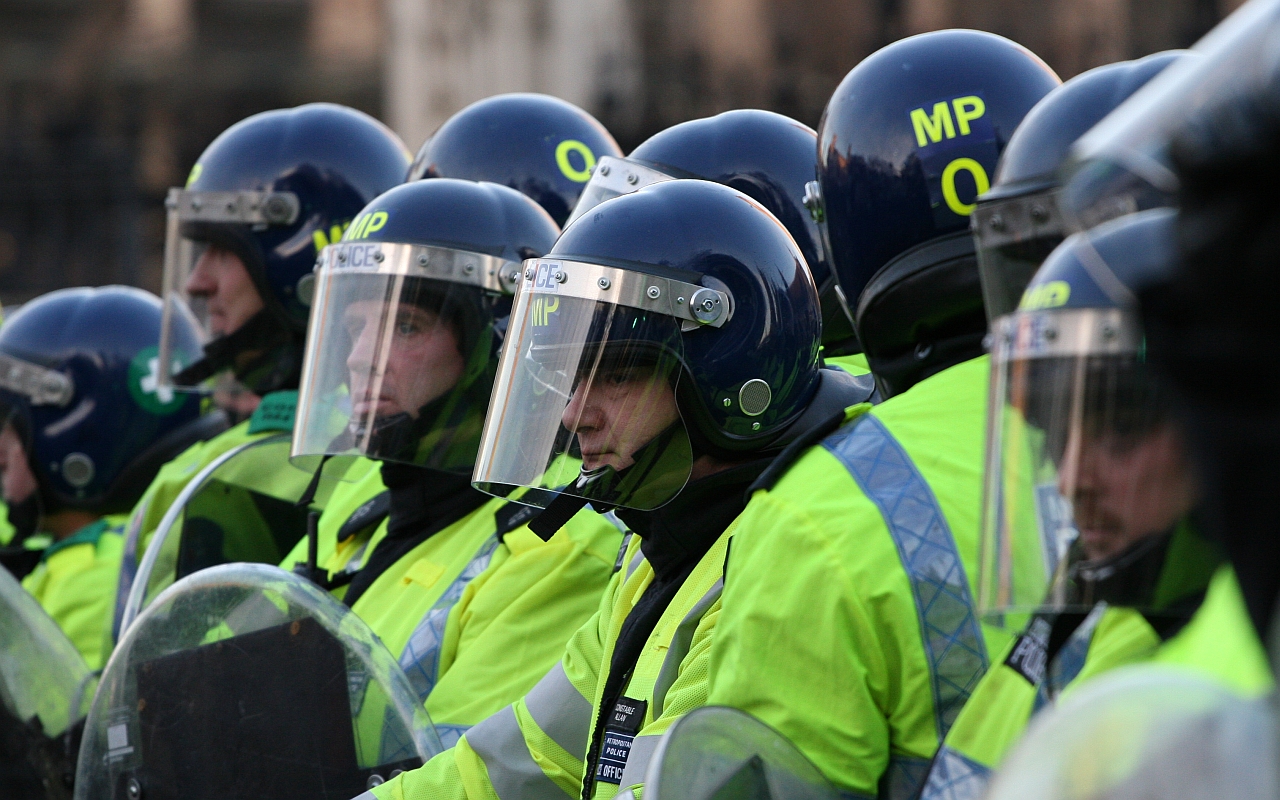 This month I was thrilled to receive successful decision on my judicial review case against the Police Commissioner regarding the police use of Kettling for indiscriminate intelligence gathering purposes, writes Susannah Mengesha. The court held that the police must not demand protesters to give their name, address and date of birth, and demand that they be filmed, as the price for leaving a kettle – see HERE on www.thejusticegap.com and HERE.

Whilst legal observing at the N30 demonstration against the cuts in 2011, I became kettled with part of a breakaway group that had gone to demonstrate against highly controversial mining company Xstrata. The role of a legal observer is to monitor and deter police misconduct at political demonstrations, and to provide information to people there about their rights. We are there to support freedom of protest but do not form part of the demonstration.

We wear orange high visibility vests marked ‘legal observer’ and carry notepads or in some very particular situations cameras to record policing of events. The police held a large amount of people in the kettle for several hours, during which time some of the more vulnerable attendees at the demonstration became distressed. Some asked me whether I thought we would be beaten. 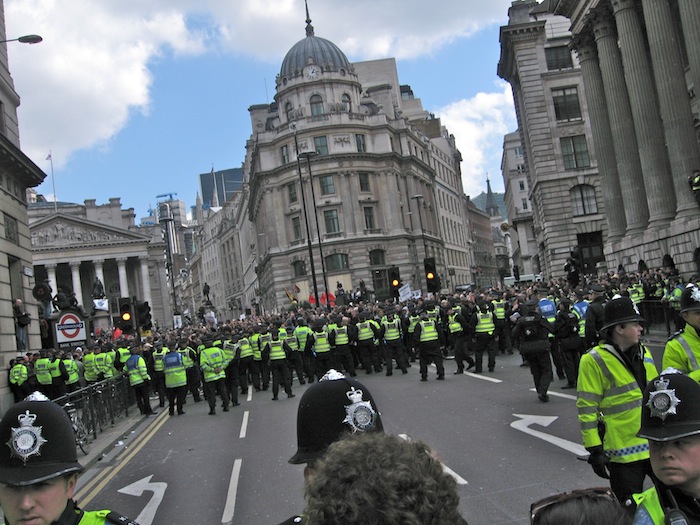 The police announced on more than one occasion that in order to leave the kettle we would all have to give our details and be searched and filmed. This was reaffirmed by individual officers. I was clear that failure to provide these details would result in my arrest. Eventually very slowly protesters started to be taken away from the kettle one by one by police to be individually processed.

Protesters who had declined to give these details were visibly thrown back into the kettle. Large buses of the sort hired by police for mass arrests were for a time visibly parked outside, and the noise from the police dogs unit parked just outside the kettle was very audible. As a legal observer I felt a responsibility to maintain my composure but I was certainly very deeply uncomfortable at being detained in this way.

Indiscriminate fishing
Whilst there is a blanket statutory search power that may be used at protests, there is no such power with respect to police filming or demanding personal details from protesters. There is no legal obligation for the public to comply with police filming, and police may only demand personal details in the street should they have a reasonable belief that you individually (not based on the crowd’s behaviour) had caused harassment, alarm or distress (the statutory definition of antisocial behaviour).

Certainly the police could not have reasonably believed that every single person caught up within the kettle (which included the elderly, the very young, legal observers and some very confused tourists) to have each committed antisocial behaviour. The sole purpose of policing tactics that day was indiscriminate fishing expedition, at the expense of of all of our privacy, dignity, freedom of protest and individual wellbeing.

‘Because you’re here’
Eventually it became my turn and I was led by officers through police lines to a ‘sterile zone’ away from other protest attendees, although I could see several others further away being similarly treated.

I was surrounded by several officers, put up against a wall and my details demanded. I was filmed very closely such that the large police camera was within arms reach and a bright light from the camera (since we had been kettled so long it was now dark) was shone in my eyes.

When I initially asked what police power they were using they declined to answer, and that question has never been clearly answered to satisfaction of either myself or the court. I was forced to turn around and be filmed both front and back, and then searched. To me it was absolutely clear that failure to comply with police orders in this situation would have resulted in my ultimate arrest. Not wanting to be arrested, and concerned that I needed to get home to my little one due to limited childcare that day, I was reluctantly forced to comply. The officer refused to give me a receipt of search, and when I asked why they suspected I might individually be guilty of antisocial behaviour, their response was quite simply ‘because you are here’.

There have been several examples of police use of kettling in this way for indiscriminate fishing expeditions. I am personally aware of examples going back as far as 2001.

My experience on that day left me feeling humiliated and disempowered. I felt sickened that a permanent record of my experience of what had felt like victimisation and harassment would be retained on police databases to view at their leisure. I also felt angered that many of the protesters that day might allow this experience to deter them from expressing their legitimate political dissent.

Not enough is known about the extent and nature of police databases, and the police have been obfuscatory throughout this entire case as to which agencies my information and images may be shared with. We know that as well as for investigation, a significant amount of more information is held on people who attend political demonstrations or meetings simply for murky wider ‘intelligence’ purposes.

A significant number of these people, if not the majority, will have no criminal record. Presence on these databases affects how individuals are policed at demonstrations, and the likelihood that they will be targeted for unpleasant and intrusive tactics such as various forms of surveillance, searching, snatch squads, and even raids. It is for this reason that many protesters choose to mask up at political demonstrations. From the day of the N30 cuts march I have never again agreed to give my details to police at political demonstrations. But like me there have been very many others who have been coerced,bullied and intimidated by police into giving details that by law they had no right to extract from us under threat of arrest.

I sought judicial review in order to compel the police to remove my details and images from their databases, and to publicly declare this tactic unlawful. At each stage of the lengthy legal process there have been challenges. The police lawyers acted in what I consider to be an obstructive and disagreeable manner. I was told that I may not have a copy of the police footage of my experience and only view it in person at Scotland Yard with my solicitor present. Having reluctantly agreed to these conditions in the absence of any other choice, the police cancelled each appointment within 48 hours or less of the day. Various reasons were given, but after four attempts (having made specific work and childcare arrangements each time) I abandoned hope and have never actually been allowed to see this footage for myself. At each stage the police lawyers challenged every factual aspect of my case, and despite this being a judicial review (intended to be based on points of law rather than fact) I was forced to obtain evidence ready to prove every point. The financial cost of meeting legal aid contributions was crippling and the process was at times stressful. Without the emotional and practical support of the Network for Police Monitoring (Netpol) I don’t know whether I would have maintained the strength to continue my claim.

This month the court handed down successful judgment vindicating my struggle. The police have one month to destroy all my images and details from that day. And it has been publicly acknowledged that what the police did to us was unlawful.vThe fact that my fight was so clearly vindicated by this successful outcome is justification itself for having brought it. The police broke the law and through the mechanism of judicial review, often the last legal recourse in the face of state oppression, were held to account. However, under forthcoming legal aid reforms, protest law cases such as mine would not be possible. The cost of privately funding a judicial review case would have been for me totally prohibitive. Without legal aid funding my case simply would not have happened.

'Bitter irony': Policing of Black Lives Matter protests…
Protesters cleared of all charges by jury despite having no…
Fast-track injustice and the 'racist-effect' on the right to…
Climate change protesters win High Court challenge against…
Episode 14: ‘We must defend rights at all costs’