The use of stop and search in England and Wales increased by 24% in the year ending March 2021 and black people were seven times more likely to be stopped than white, according to the latest figures published by Home Office.

According to the most recent data, there were over 695,000 stop and searches carried out by the police in England and Wales under the Police and Criminal Evidence Act (PACE), an increase of 135,808 compared with the previous year. The figures also revealed that individuals who self-identified as ‘Black’ or ‘Black British’ accounted for around 14% of people searched by the police for the 2020/2021 year, despite accounting for 3.3% of the overall population in England according to a 2011 Census conducted by the Office for National Statistics.

Police powers and procedures: Stop and search and arrests, England and Wales, year ending 31 March 2021 out today via @ukhomeoffice https://t.co/vNKpEyei6s 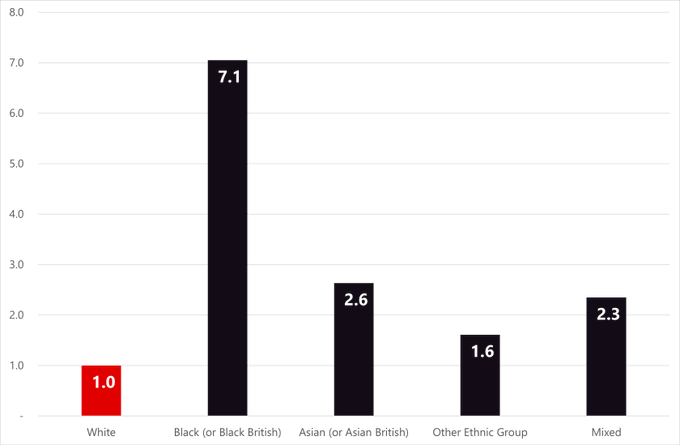 Several leading civil liberties campaigners have scrutinised the latest Home Office figures, citing concerns with the potential for discrimination and the lack of safeguards for those subjected to stop and search powers. Katrina Ffrench, Director of the charity UNJUST UK, commented: ‘When crime rates declined at a time of a global pandemic, officers decided that increasing searching by 24% would be an effective use of resources. What a missed opportunity to support communities – the phrase ‘overpoliced, unprotected’ comes to mind.’ Habib Kadiri from StopWatch UK also stated that the latest Home Office figures proved ‘that the vast majority of stop and searches cause more problems than they solve’. ‘What is exceptional is how racial disparities persisted even during a global pandemic, proving that the police never stopped working tirelessly to overpolice people of colour’.

Emmanuelle Andrews, campaigns officer at Liberty, said that the latest statistics ‘reinforce just how alarming the Government’s plans to expand stop and search powers are, especially given their recent dangerous proposals to remove the very safeguards that are supposed to protect people from discrimination and abuse of police power.’

The availability of the latest Home Office figures come in the wake of reports alleging that ministers withheld the release of the data in an attempt to avoid further scrutiny of the proposed Police, Crime, Sentencing and Courts Bill and Nationality and Borders Bill. As previously reported by the Justice Gap, Liberty and StopWatch began taking legal action against the Home Secretary Priti Patel after her decision to scrap safeguards in the Best Use of Stop and Search Scheme (BUSSS). In a pre-action letter to the Home Office, the groups called for the immediate reinstatement of BUSSS safeguards and warned that their removal would greaten the risk of disproportionate use of ‘suspicionless’ stop and search powers by the police on black suspects.

Following the publication of the annual stop and search figures, a Home Office spokesperson said: ‘Stop and search is a vital tool for police to protect the public. Tragically, data shows that young black men are disproportionately more likely to be the victims of knife crime. No one should be targeted for stop and search because of their race and there are extensive safeguards in place to prevent this.’