‘Solidarity in action – and it works’

‘Solidarity in action – and it works’ 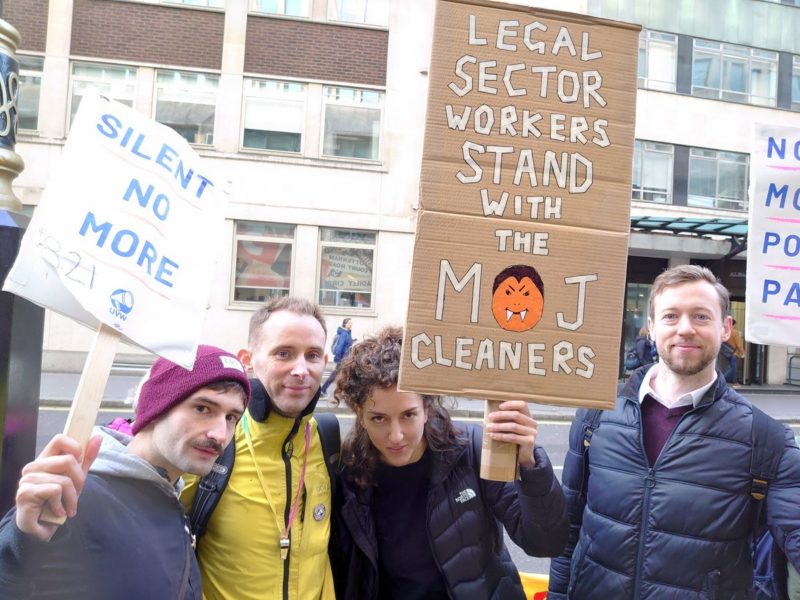 Legal Sector Workers United, a branch of the trade union United Voices of the World, was founded last year. LSWU’s comms officer Isaac Ricca-Richardson on a new union to ensure that all workers are legal adequately paid and fairly treated, and to fight for a profession where justice is prioritised over profit.

In the 18 months that have passed since LSWU began, legal workers have been through a hell of a ride. The COVID-19 crisis has exposed the deeply inequitable operation of most workplaces. The lowest paid, least secure workers have been expected to bear the greatest burden, while many partners appear to have insulated themselves from all risk.

Our members have been discriminated against, unlawfully denied pay, refused permission to work from home even while shielding, made redundant when they should have been furloughed, and mistreated in myriad other ways. Cleaners and support staff subcontracted through agencies were unceremoniously let go, with zero regard for whether they would be able to sustain themselves.

None of this was caused by the virus. Instead, the past 10 months have enabled us to see with greater clarity the deep-rooted, structural problems that already existed in our sector – from vast pay gaps to strict hierarchies and a rampant culture of overworking.

If all that wasn’t enough, the government has also treated legal workers with naked contempt. Considering legal aid pay has been diminishing for years, it is perhaps unsurprising that they expected us to attend police stations without safety protocols, and decided that extending court hours was the best way to fix a hearing backlog that only exists because of their ideological commitment to austerity. But it is new ground for them to directly attack us as ‘activists’, ‘lefty lawyers’ and ‘do gooders’ just for doing our jobs; exposing us and our clients to a risk of harm just to create fuel for their manufactured culture war.

If this article so far reads as defeatist, then there is absolutely no reason to be. Because whilst legal workers could not be blamed for giving up in the face of such problems, they have done the exact opposite. LSWU has tripled in size since the crisis began, and our members have begun to engage in industrial battles like never before.

Members have successfully demanded supplementary furlough pay, guarantees of communication from management, and safe work-from-home policies. They have forced the adoption of the Police Station Protocol, which keeps police station representatives safe by enabling remote access. And they have pushed forward the #strike4justice campaign.

Because workers’ concerns are never confined to the material conditions in their own workplaces, LSWU’s membership has also begun to ambitiously campaign to improve the wider sector and to stand in solidarity with our communities. This has included organising with detained and undocumented migrants to demand a right to work for all and an increase to the £1 per hour pay rate in detention; founding ‘Law So White’ to tackle structural racism in the sector; and supporting BPTC students in the fight against discriminatory assessments.

Meanwhile, LSWU’s casework team has represented over 50 members in the past five months – challenging mass redundancies, disciplinaries, dismissals and discrimination, and winning tens of thousands of pounds in compensation. The majority of our casework is done by our own members, who volunteer their time alongside one paid caseworker. It is true solidarity in action, and it works.

Just last month, an LSWU member took on the divorce firm Vardags in a High Court battle arising out of the leak of their memo that reminded female staff that they could dress ‘discreetly sexy’ but ‘never tarty’. The firm was already the subject of an outstanding disability discrimination claim from the member, but nevertheless tried to put her on the hook for £68,000 in costs, as well as seeking an interim injunction. Our member was represented pro bono by a team of fellow members, and won.

These kinds of victories, achieved through collective action, demonstrate that it actually is possible for workers to take on bosses or the state. That experience in turn creates the conditions for greater unionisation and ever more ambitious demands. As a result, it no longer feels blindly optimistic to say that legal workers are equipped to fight for a sector that is free from discrimination, accessible to all, and directed at justice rather than the relentless pursuit of ever greater profits.

As a members-led trade union, LSWU is the natural vehicle for this movement. We are committed to purposive democracy and accountability to our members, and are in the process of establishing a ‘representatives committee’ where elected representatives from our various workplaces will be able to share their knowledge and experiences of organising, and create cross-workplace strategies.

On 28 November this year, LSWU held its inaugural AGM. It began with each member describing their reasons for joining the union. Although each of us differed in the details, the sense of shared purpose was palpable; join us today, and there is no limit to what we can achieve.

Our print magazine is Proof. Contributors include Michael Mansfield QC, Bob Woffinden, David Rose, Eric Allison and Ian Cobain.
Buy Proof Magazine
The latest issue (Why legal aid matters) includes Helena Kennedy QC and Martha Spurrier in conversation, David Conn on the legacy of Hillsborough - plus how to build your own law centre.
Isaac is LSWU's comms and media oofficer

'Workers with a union to back them can move mountains'
Housing campaigners calling for a halt on evictions…
Security guard who led strike against outsourcing to…
Cetin's story: 'We’re there looking after everyone…
Outsourced workers challenge royal parks over race…