Scrap prison sentences of under a year, say MPs

Scrap prison sentences of under a year, say MPs

MPs have called on the government to consider scrapping sentences of up to a year in a report published this morning on the ‘enduring’ crisis in our prisons. Over the past 25 years the prison population had grown exponentially from 44,246 in 1993 to 82,384.

‘We are now in the depths of an enduring crisis in prison safety and decency that has lasted five years,’ the House of Commons’ justice committee report concluded. The MPs reported that capacity had not kept pace with the massive population growth, many prisons were now overcrowded whilst the amount spent on prisons had fallen in recent years. ‘We conclude that ploughing funding into building prisons to accommodate prison projections is not a sustainable approach in the medium or long-term,’ the committee wrote. ‘There must be a focus on investing in services to reduce the £15 billion annual cost of reoffending and prevent offenders from continually returning to prison, thereby reducing the size of the prison population.’

The committee recommended that the Government introduce a presumption against short custodial sentences and ‘model the effects of abolishing sentences of fewer than 12 months’.

‘We are now in the depths of an enduring crisis in prison safety and decency that has lasted five years… . There is a grave risk that we become locked in a vicious cycle of prisons perpetually absorbing huge amounts of criminal-justice related spending, creating a perverse situation in which there is likely to be more “demand” for prison by sentencers in areas where they have less access to effective community alternatives.’
House of Commons’ justice committee

‘The Ministry of Justice (MoJ) and Treasury are guilty of a crisis management approach to prisons that has been failing for the past five years,’ commented chair of the Justice Committee, Bob Neill MP. ‘Throwing money at the prison system to tackle multiple issues takes funding away from external rehabilitative programmes that could stem or reverse many of the problems.’ 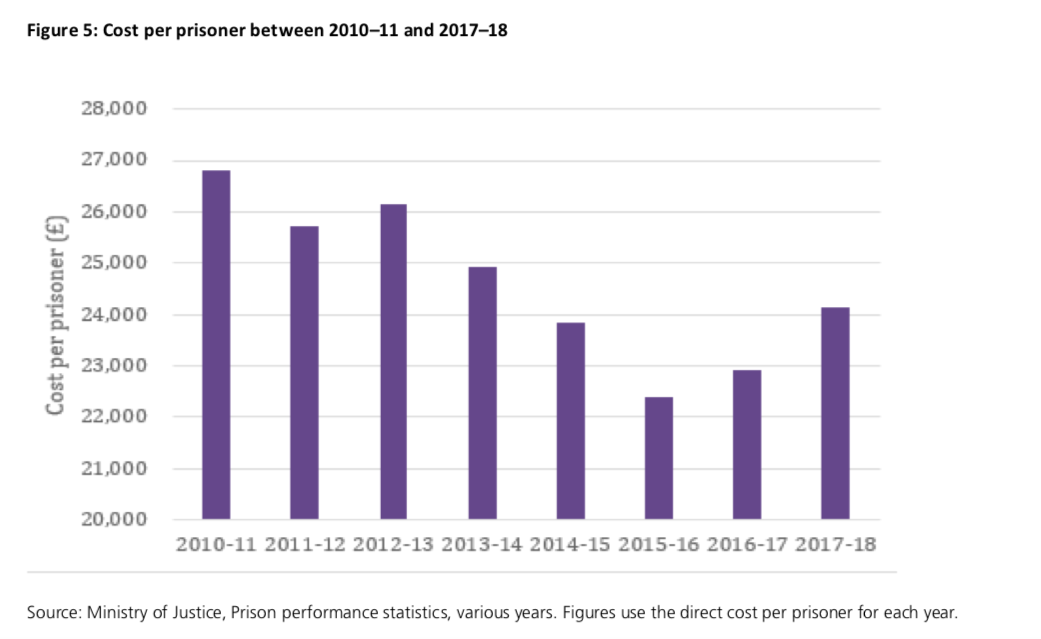 The report quoted an analysis by Julian Le Vay, a former finance director of the prisons service, who found that the MoJ’s current ambitions were ‘inadequately funded to the tune of £162m in 2018–19, rising to £463m in 2022–23’.

Mike Driver, the MoJ’s chief financial officer, told MPs that, without securing more money from the Treasury, it would be necessary to reduce the prison population by ‘something like 20,000’. ‘The thing is that we are not working in an environment that would necessarily allow those very broad assumptions to be deliverable,’ he added.

The MPs have called for a ‘refreshed narrative’ around prisons including ‘an explicit recognition that social problems cannot be meaningfully addressed through the criminal justice system’. ‘This is not only a moral imperative but also now a financial necessity,’ the report added.

The justice secretary Rory Stewart MP appeared before the committee to discuss the poor performance of HMP Liverpool. ‘We should be deeply ashamed as a society if people are living in filthy, rat- infested conditions with smashed-up windows, with high rates of suicide and violence,’ he told the committee. ‘We are tough and we are clear on prisoners: if you commit an offence, your punishment is to go to prison. But we do not torture people in prisons through unsanitary conditions, and we must never allow that to happen.’

Bob Neill called for ‘a serious open public debate about the criminal justice system, the role of prison and its affordability’. ‘There must be greater transparency so that everyone can understand the true costs and challenging nature of decisions which need to be made about public spending on prisons and other aspects of criminal justice. This should form the first step of the Justice Secretary’s ‘National conversation’. These issues cannot be hidden behind the prison gates any longer.’

MPs condemn Boris Johnson’s ‘policy by press notice’…
Campaigners call for cut in ‘destructive’ short-term…
Stop ‘churn’ of prisoners through jail to limit COVID-19,…
Old and white prisoners most likely to be treated with…
MPs call for 10 year investment for 'clunky, chaotic' prison…