Rehabilitation and the Daily Mail effect

Rehabilitation and the Daily Mail effect

This weekend I was  surprised to see a well-respected human rights commentator expressing concern about a news report failing to mention the full details of a man’s conviction for causing grievous bodily harm. Adam Wagner tweeted ‘Rubbish journalism: @Guardian fails to mention awful background to Paralympic weightlifter ban’. For the Guardian article read HERE.
I read the report and replied that they had mentioned his conviction and sentence for what was clearly a very serious assault. 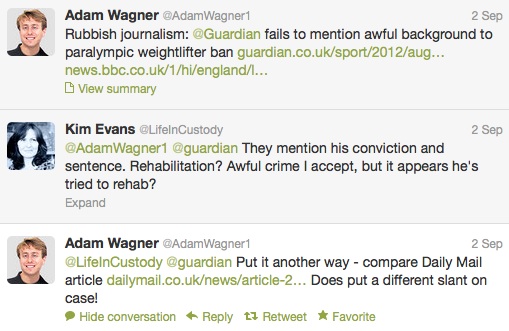 The Guardian article, written by the paper’s prison correspondent Eric Allison, concerns a man who was due to compete at the Paralympics, having lost a leg shortly after his release from prison in a motorcycle accident. It said that his application to compete had been supported by his Probation Officer, and that since his release from prison he has ‘spoken regularly to young people on the dangers of being involved in crime’. He was banned from competing at the Games after failing his security clearance.

The full story
Wagner also linked in his tweet to this BBC News report from 2006 which gives the background to the original offence – HERE. His view was that the Guardian report should have mentioned the full details of the crime Efayena was sentenced for as it was ‘directly relevant to the question of security clearance’. He also linked to this Daily Mail report – HERE – which, he said, puts a ‘different slant on the case’. He said in a reply to me that the Daily Mail article was ‘much better’ as it ‘presents both sides, albeit with more gory detail than necessary’.
I read both articles, and came to a very different conclusion. Firstly, let me make clear that this was indeed an extremely serious assault and, yes, I agree that security checks are important and necessary to ensure the safety of the Games’ participants, spectators etc.  My concerns are not about the decision to ban Efayena from the Games, it’s about the view that the Mail article is somehow a ‘more balanced’ one than the Guardian. It’s also about our approach to the rehabilitation of offenders, and the feeling that somehow, if you’re black, poor, violent, or all three you’re never going to be allowed to leave your past crimes behind you no matter how hard you try.
Compare the language used in headlines, the Mail’s  ‘Weightlifting gangster…barred from Games’ and the Guardian’s  ‘British Paralympic weightlifter barred…over past conviction’.
The Mail goes on to say that ‘despite’ this heinous attack (and I repeat, heinous it certainly was) Efayena was cleared to compete at the Games, and that the ‘Nigerian-born convict’ was stopped in his tracks when security officials refused him entry to the competition. The article goes on to say that the ‘100kg hulk’s past finally caught up with him when he was told he would not be competing’.

Balanced? Really? Or designed to be inflammatory and racist? If you don’t agree, check out the very first comment, which simply says ‘Send him back’. And surely his past caught up with him when he was convicted and sentenced to a term of imprisonment? Further down a comment suggests he ‘should have been sent back’ and that it ‘doesn’t mean anything to be British anymore’.

Efayena comments himself and gives a self-serving explanation (not unheard of by those familiar with the criminal justice system) in which he plays down his offence by saying he ‘found himself caught up in a situation which got out of hand’.

But interestingly, another comment points out that he was in fact born in the UK and had not re-offended since leaving prison, since when he has worked with homeless people and young offenders.  The comment concludes by saying ‘no wonder the reoffending rate is so high if we do not give people a second chance’. I don’t think that the Daily Mail’s article was balanced. I think it was offensive, and racist.

3 responses to “Rehabilitation and the Daily Mail effect”

'The whole of the criminal justice system dumped on Eddie'
The '50 shades' defence: are the courts allowing…
Women twice as likely to face harsh sentences when drinking
Bamber's lawyers challenge CPS over non-disclosure
Mother begins legal action against MoJ over child’s…