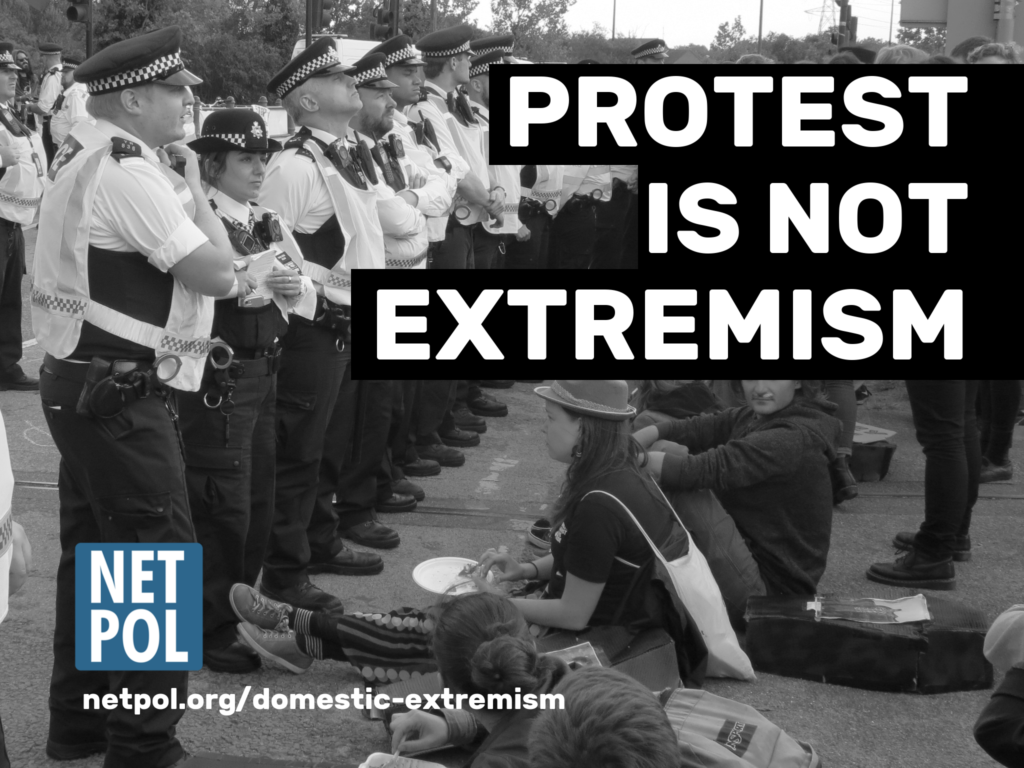 The police have finally dropped the term ‘domestic extremism’ after critics have accused them of rebranding lawful protest by using the phrase to capture a wide range of campaigning activity. The National Police Coordination Centre, which oversees the deployment of police officers to large scale events and in times of national crisis, has confirmed that it will no longer use the term. Its decision comes 12 months after a similar decision by the Home Office (here).

A freedom of information request by the campaigning group Netpol, the Network for Police Monitoring, has confirmed the policy change. You can read more on Netpol’s site here. The NPoCC have told Netpol that the counter terrorism policing headquarters will be looking for new terminology.

‘Domestic extremism’ has been used to justify police surveillance on people, many of whom have not been arrested. In January 2019, The European Court of Human Rights in Strasbourg ruled police were not justified in retaining and compiling records of 94-year-old peaceful protester, John Catt. The Court ruled the records on a database of ‘domestic extremisms’ were unnecessary, violating Catt’s human rights, and that the database lacked safeguards to protect protesters’ rights.

MI5’s website, which no longer contains the term, previously defined ‘domestic extremism’ as ‘individuals or groups that carry out criminal acts in pursuit of a larger agenda’ who ‘may seek to change legislation or influence domestic policy and try to achieve this outside of the normal democratic process’.

Netpol criticised the lack of clarity around ‘criminal acts’ and ‘normal democratic process’, claiming the definition failed to acknowledge direct action protest’s role in democratic process and the implied ignorance of the differences between civil disobedience and more serious forms of criminal activity. The group suggested its broadness has allowed the police to use the definition as it suits them.

Netpol has run a ‘Protest is Not Extremism’ campaign to highlight its concern that the has been assigned to campaigns using civil disobedience or direct action tactics which do not break the law. Netpol claims the term ‘extremist’ is consequently given to campaigns who are not undertaking unlawful actions.

The term was given to Green Party peer Jenny Jones and comedian Mark Thomas. The Guardian revealed in January 2020 that counter-terrorism police labelled Extinction Rebellion (XR) as an extremist ideology, bundling Greenpeace, and Stop the Badger Cull with extremist right wing groups, such as the National Front. This labelled the non-violent groups the same as the National Action group, banned for terrorist violence in December 2016, under the Terrorism Act 2000.

A letter to the Guardian in 2019 from 152 campaigners, lawyers, politicians, and journalists demanded ‘domestic extremism’ no longer be used to categorise protest activities. The list included John Catt, Kate Hudson from the Campaign for Nuclear Disarmament, and the co-founder of Extinction Rebellion, Dr Gail Bradbrook.

Ellie is a second year undergraduate reading History and English Literature at Durham University. She is interested in civil rights and liberties, state intervention, and international law and hopes to be a barrister

Our print magazine is Proof. Contributors include Michael Mansfield QC, Bob Woffinden, David Rose, Eric Allison and Ian Cobain.
Buy Proof Magazine
The latest issue (Why legal aid matters) includes Helena Kennedy QC and Martha Spurrier in conversation, David Conn on the legacy of Hillsborough - plus how to build your own law centre.
Ellie is a second year undergraduate reading History and English Literature at Durham University. She is interested in civil rights and liberties, state intervention, and international law and hopes to be a barrister