The police were using the power to detain too freely and detainees’ lawyers were failing to challenge its use, according to a report by Transform Justice. The group calls for increased scrutiny around detention to not just focus on detainee’s health and welfare, but to question the rationale for detaining at all.  You can read Penelope Gibbs on the overuse of police custody here.

In order to detain a suspect after arrest it must be considered ‘necessary’ in order to properly gather evidence.  Transform Justice estimate, based on data obtained under freedom of information requests from local police forces, around 850,000 adults were detained in police custody in the 12 months to August 2019 with around 140,000 of detentions in London.

Decisions as to whether it is necessary are supposedly made by custody sergeants introduced so as to provide some degree of independence in decision-making about detention. The report found that in reality there was such a degree of cross-over between roles that custody sergeants often played a merely administrative role following the lead of the arresting police officer.

Transform Justice argue that there is a clear need to challenge the need for detention by the detainee’s lawyer. However police station lawyers are paid such a low fixed fee on legal aid that this militates against proper scrutiny.

According to the report, a tiny fraction of detention requests are refused, less than 1%. When questioned as to why custody officers do not push back more, one custody division worker said that the police were ‘so hierarchical, I think that would be a very brave custody sergeant who would do that’.

‘Low fixed fees for police station work remain a barrier to lawyers doing anything other than interview attendance, but not everything has to happen face- to-face,’ Transform Justice say. Access to legal representation was the ‘elephant in the room – around 50% of suspects do not even request a lawyer at the police station’. ‘A key step to scrutinising the use of police custody would be to increase the number of suspects who have legal representation in the first place,’ it continued.

It is estimated that up to almost one in five of those in custody (22%) are considered ‘vulnerable’ meaning they have some mental health issues or alcohol or drug dependency. According to the report, the police attitude is that ‘playing it safe means detention’. The report challenges this idea and suggests instead that detaining people who are considered vulnerable causes long term damage that is greater than the risk that if these suspects are released they will commit a further offence. The caveat for this argument is those who have committed serious offences.

Not only are too many people being detained, once they are detained they are held for too long. The police officer has 24 hours once a suspect is detained to charge or release. The evidence is that police officers are in no hurry to beat the 24-hour deadline and work is often carried out at the last minute. Due to these long delays there are ‘detention reviews’ conducted by an inspector. The inspector checks in on the welfare of the detainee after six hours and ever nine hours from there. In reality these ‘investigations’ are often box-ticking exercises. Dr Miranda Bevan, who has investigated police detainees, told Transform Justice: ‘I did not get the impression in any case that the Inspector was seriously weighing the question of further detention.’

Lawyers faced ‘a difficult balancing act’ at the police station, the group said. They needed to challenge ‘but for that challenge to be respected’. ‘Cosy relationships with the police can cross the line to cooperation, which is often not in the client’s interest,’ the report continued. ‘All legal representatives should be trained in how to strike this balance so they can constructively challenge custody officers about the need for detention.’

Lawyers spoke about feeling that police stations were ‘not their turf’ and viewed the problems of challenging detention as a reflection of this. Around 50% of suspects did not even request a lawyer at a police station.

‘There’s no point in going into a police station and claiming police breached PACE in front of everybody, because you are on their turf. It’s their time. You’re not in a courtroom, which is your time. They have complete control of everything.’
Defence lawyer, quoted in the report

Several police and lawyers told Transform Justice about a decline in ‘robust discussions between custody officers and lawyers’. ‘I used to have regular meetings with defence lawyers… sometimes it was a bit adversarial which was fine because I was up for it, they were up for it, and it was a really good opportunity to interchange,’ one former senior custody lead told the group.

Transform Justice made 14 recommendations including the establishment of  a public scrutiny panel comprising lawyers, members of the public, and academics. These panels would focus individually on bail, detention decision making and RUI, checking for consistency across the board. The group also calls for better training for custody officers to embolden them to challenge the detention decision in the first place, meaning they would play the ‘independent role’ that was first envisioned. 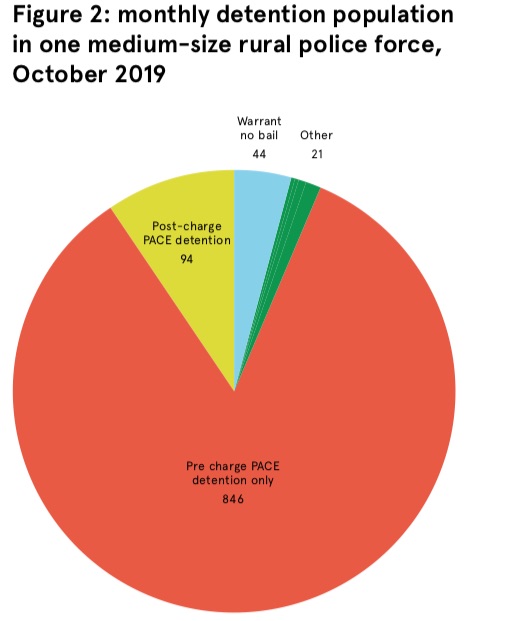 The chart shows the police custody population in one medium-size rural police force area in one month in 2019. Most people (94%) detained in police custody  were arrested on suspicion of committing a criminal offence. These suspects were being held while the police investigated and gathered enough evidence to try to secure a charge.

Of these, 10% (94) continued to be held in custody after being charged until their court appearance.

About 4% of people in police custody that month were on a no-bail warrant – this usually means they have been arrested for failing to turn up for a court hearing. The other 2% of the custody population is made up of those who have been recalled to prison or have breached bail, and small numbers detained on immigration charges, those held for breach of the peace, or brought to police custody after being detained under the Mental Health Act.