Femicide Census 2020: A woman is killed by a man every three days

Femicide Census 2020: A woman is killed by a man every three days 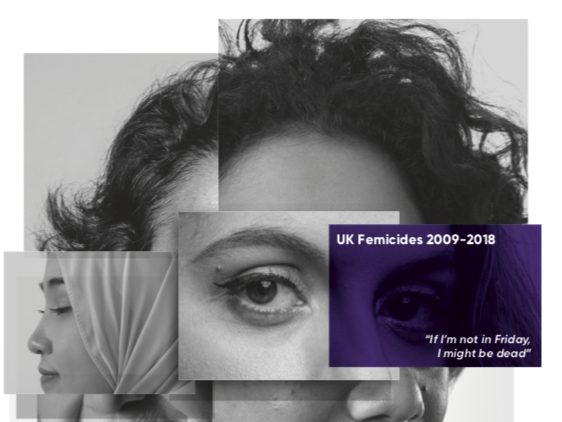 A woman is killed by a man on average every three days, according to the most comprehensive study of women killed by men. A new report by Femicide Census finds that 1,425 women and girls were killed in the UK over the ten year period between 2009-2018.

The report gives a stark reminder that are than six to of 10 of all women killed by men are killed by someone whom they know (62%), often a current or former partner and less than one in 10 cases involve total strangers (8%). Of the 888 women killed by current or former partners, at least 43% had separated or were in the process of separating. Almost nine out of 10 of these women (89%) were killed within the first year of separation and more than a third (38%) were killed within the first month. ‘This highlights the fact that leaving is often a risk factor for escalated violence and that just because a woman leaves – or has left – a perpetrator does not mean she is free of the danger,’ the report says.

‘We owe it to the lives of all of these women to ensure that the government and partner agencies focus on the gendered nature of domestic abuse and wider forms of violence against women and girls to ensure that anyone subject to abuse is provided with the all the support they need,’ said Nicole Jacobs, Domestic Abuse Commissioner.

The study highlights that most of the killings are not spontaneous or isolated events: there was a history of abuse in 59% of ‘femicides’ committed by a partner or other male relative. In a third of those cases, the abuse had been reported to the police. The term ‘femicide’ was coined by Diana Russell to recognise female killing as a specific type of male violence, in the hope that governments would take steps to reduce it. Jill Radford, author of Femicide: the politics of woman killing (1992), said, the Femicide Census marks ‘a significant milestone in the development of knowledge and understanding of femicide, the misogynistic killing of women, across the UK over a ten-year period’.

The report surveyed the profiles of the victims and perpetrators. It found that 59% of women killed were between the ages of 26 and 55, with 3% of victims under 18. The youngest killer was 13. 81% of perpetrators and 84% of victims were British born, attempting to dispel the notion that this is a ‘foreign’ problem. Data on race and ethnicity was drawn from Freedom of Information requests; but the report criticises as a ‘major state failing’ the lack of of verified data on ethnicity because, without it, the role of racism and discrimination cannot be properly understood. Vera Baird QC, the Victims’ Commissioner, said, ‘the lack of detailed, disaggregated data collected about femicides by the State has long represented missed opportunities for appropriate understanding, prevention and prosecution of femicides’.

The home was found to be ‘the least safe place for women even when she has her own property’ and seven out of 10  killings took place either in the shared home of the victim and perpetrator or the victim’s home. Some 57 killings were specifically sexually motivated and 83 killings clearly involved sexual violence; but the report states these findings are likely to be “underestimates”. In some cases, the corpse was later violated, such as through explicit sexual mutilation.

In more than six out of 10 cases, the perpetrator received a verdict for murder with quite substantial sentences (62%) and in less than one in five cases (17%) a verdict of a manslaughter or culpable homicide was given. The sentences handed down with respect to the manslaughter cases ranged from as low as one year up to 21 years, due to the permissible range of sentencing.

The report makes a number recommendations and principally calls on the UK Government to ratify the Istanbul Convention– which aims to prevent and combat violence against women and domestic violence – as the UK is one of the few countries not to have done so.

The Femicide Census 202o calls for a designated senior officer to be made responsible for femicides in all police forces; that sentences should recognise that domestic violence is a breach of trust and an aggravating factor; and sustainable funding must be provided for independent specialist services, including those women with no recourse to public funds.