Meet the prisoners coaching themselves out of the prisons crisis

Meet the prisoners coaching themselves out of the prisons crisis 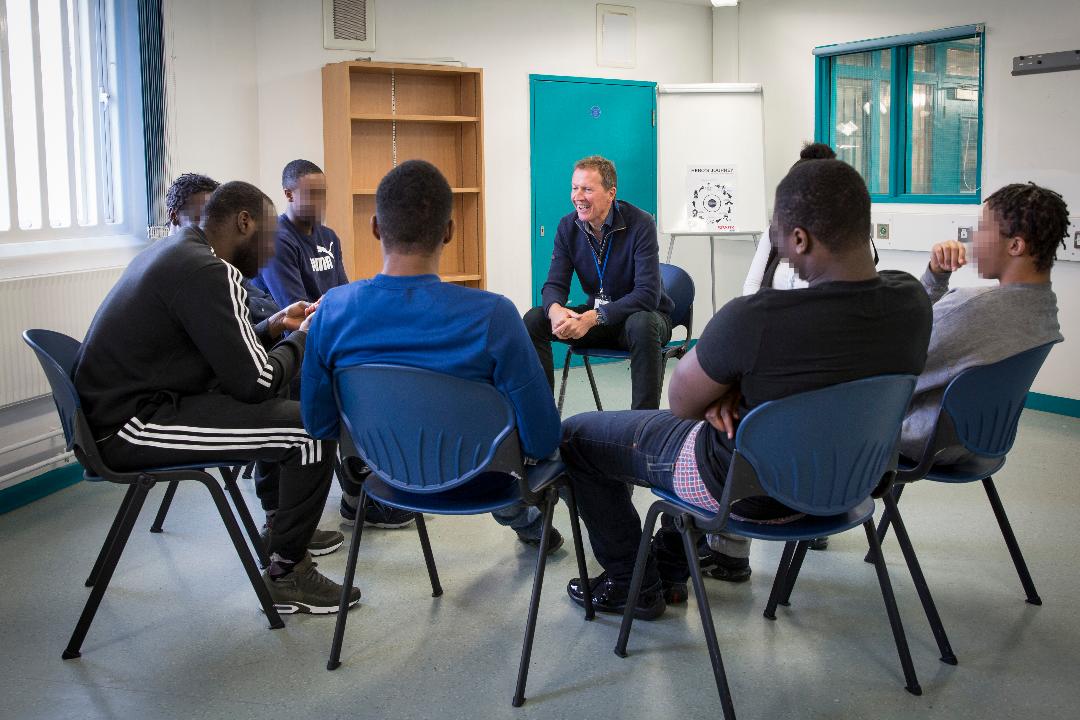 Prisons are the most violent and damaging they have ever been. Self-harm by prisoners, inmates assaulting each other, and attacks on staff are all at ‘record highs’. Flooded with the dehumanising psychoactive drug Spice, they are still reeling from the loss of experienced staff to austerity cuts and running regimes in which inmates are on lockdown in their cells for up to 22 hours a day. For the first time ever this year, the UK’s jails will be investigated by the UN’s Committee Against Torture. Photographs by Andy Aitchison.

In their current state, it is difficult to see how our prisons can be places of change, positivity, of anything constructive.

Government ministers speak of reform, but with continued cuts and a fundamental rethink of the purpose of prisons lacking, change from above cannot be relied on or waited for. Practical solutions that can start making a difference now are required. 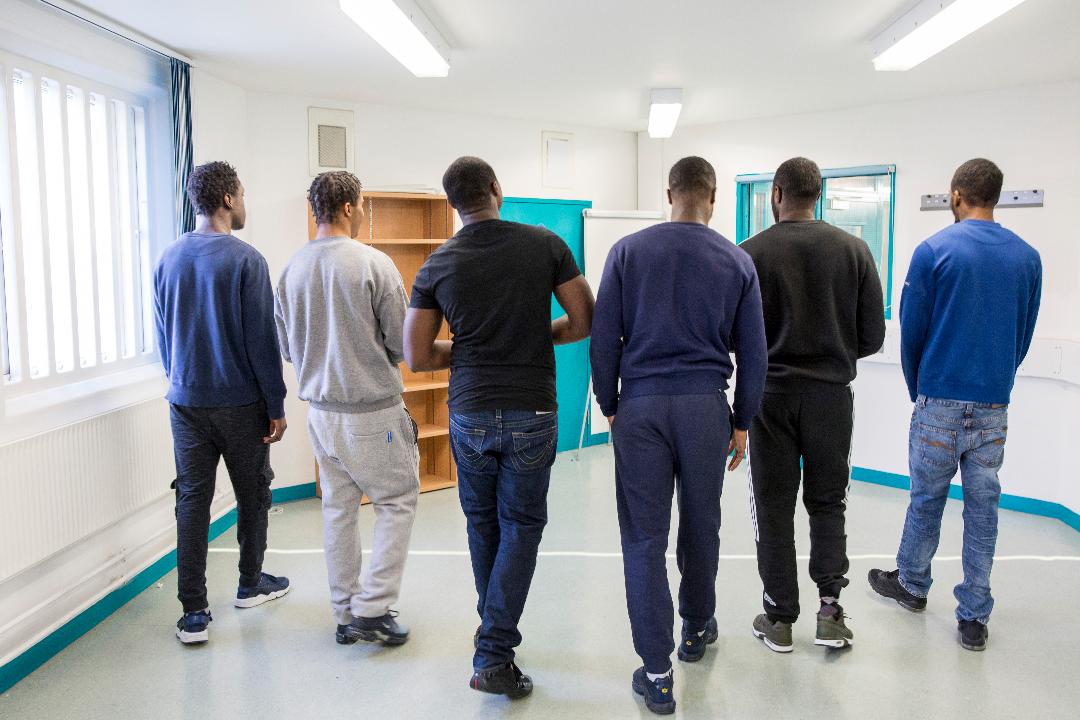 “I’ve never met anyone I’ve coached in prison who has been a bad person,” Lilian Flynn, who works for the charity, told me.

“Sometimes, when I sit there and listen to these stories I ask myself, ‘would I have done the same thing?’ ‘Would I have been in the same situation if I had been born into their circumstances?’ Everyone is human.”

Founded in 2012 by Baillie Aaron, Spark Inside offers two courses: personal life coaching for prisoners aged 18 to 25, and systems coaching in which prisoners and prison staff are helped to better understand and improve their day-to-day lives.

Nearly 1,000 prisoners have completed the programmes in jails in London and the south-east including Wormwood Scrubs, Wandsworth, Isis, Belmarsh, Brixton, Pentonville, Wandsworth and Feltham and Cookham Wood young offenders institutions.

Those who believe prisons should be places for punishment might label Spark Inside’s work as being ‘soft’ on prisoners.

In reality, asking inmates to think about how and why they became involved in crime and what they need to do to change is challenging work – much more so than sitting in a prison cell hour after hour watching daytime TV.

Baillie Aaron was teaching entrepreneurship classes in prisons in Boston in 2009 when she saw firsthand the lack of hope and powerlessness felt by so many prisoners.

After coming to Britain to study, she asked young people in London who had been impacted by prison what they needed to change. ‘We don’t want to be told what to do’ and ‘we want tailored support’, she was told. From this, Spark Inside was born.

The charity aims to help prisoners find their own solutions and coaches do not counsel or ‘fix’ their lives. The approach is premised on the belief that people are the experts of their own lives and change can only lie with them.

“We help them to be able to think about things differently, but the light bulb moments and the realisations are their’s and the ownership is with them and they take responsibility for the process, we just facilitate,” Lilian, who is a life coach for Spark Inside, told me.

“When someone notices a value or something worthwhile in them, some of them have said that’s the first time they’ve ever heard someone saying something positive to them.”

“A lot of them feel they’ve been let down by the system,” she added.

“At the end of one of the sessions one of them had this light bulb moment and he was like ‘no one is coming to save me, if I want help, I need to get help myself’. I think that’s so powerful for that young guy himself and for society. If we send those prisoners out and they have a sense of ownership about their lives, it’s a completely different situation.”

A coach in the corporate sector, as well as in education, Lilian said she uses exactly the same tools and techniques with prisoners as she would with managers in a big business because “people are people”.

The charity’s life coaching course is based on the Joseph Campbell work, The Hero With A Thousand Faces, a discussion of archetypal heroes through history who had to overcome trials and tests in order to gain strength and progress their lives. The director George Lucas credits the book as inspiration for his Star Wars films.

Lilian believes coaching not only benefits individual prisoners, but society as a whole, through reducing reoffending and putting the experiences of inmates to work in the community.

“One guy joined a gang at nine and I asked the question ‘what advice would you give yourself if you were to go back to then?’,” she told me. “He realised he didn’t feel there was another way. His role models were these older guys that were in gangs and those were the people he looked to. Now, he said he really wants to go out and be a mentor and help young people who are in the same environment that he was. That’s what we need.

“If you have young men who have been through the system, who know why this is happening, we need to try and help rehabilitate them so they can go out there and really be able to help. It’s a voice that people will listen to more.”

Coaching is necessary to help people think more about their lives because, most of the time, “we react rather than respond”, according to Lilian.

“It offers a space for you to hear yourself think out loud, where someone is solely there to help you and give you their full, undivided attention,” she said. “Often, we don’t have that. When something is so close to you, you can’t see it.

“It’s not that people don’t think, but sometimes people haven’t been in a position where someone has asked them those questions.” 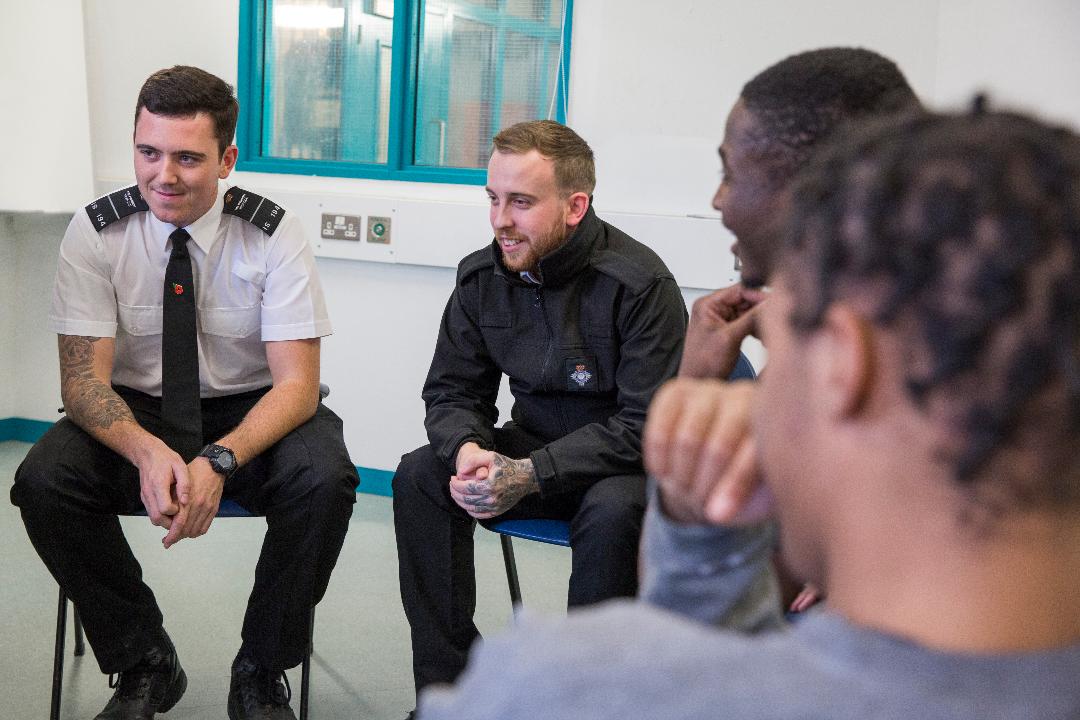 Although Spark Inside doesn’t see coaching as the answer to the prisons crisis, it believes it can be one of a number of practical solutions.

“Coaching isn’t a panacea for the prisons crisis and we don’t think any single intervention is because we’re talking about a service that has been consistently de-funded over the past few years,” Hannah Pittaway, the charity’s policy manager, told me. “But what we are offering is practical solutions to the challenges that are faced by the people living and working in prisons now, at a time of increased violence.”

More prison governors are becoming interested in the charity’s systems coaching as “there aren’t many interventions that are based around prisoners and prison officers talking about how they interact with each other on a daily basis and what is in their power to change and collaborate on to improve their living conditions for the better,” she said.

Duncan Müller, who is a systems coach for Spark Inside, said much of his job involves empowering prisoners and prison officers “to be vulnerable and to show compassion”.

“We help these two groups, where the system has almost trained them to distrust and disrespect each other, to express themselves, what’s been going on for them and voice their concerns in a safe space,” he told me.

“There are operational challenges so both groups can feel very disempowered, both groups operate in this rule-based community where both of them don’t have a lot of say actually and so one will blame the other. There’s lots of blame… This is all about improving relationships. In a place like prison, where there is so much hardship and pain, this is crucial.

“Budgets are under threat, it’s a difficult environment. If the relationship between prisoners and prison officers has more safety and trust, if that prisoner can accept an apology from the prison officer, then actually that can help them profoundly.

“It’s all about trying to break down stereotypes and step back from this blaming culture. And that means that, when something happens to them, they can ride the wave. So much more is possible when people are standing in these positive emotions.”

Spark Inside’s life coaching courses have reduced reoffending by one-third in the first six months after release for prisoners who have participated at two jails, while other evaluations have shown an improvement in inmates’ wellbeing, their empathy and emotional intelligence, decision-making and problem-solving skills, confidence and resilience.

Often, the value added will be unquantifiable.

For Trevor, a prisoner in Wormwood Scrubs, “no punishment can stop you committing crime if you don’t want to stop. You need an understanding of what you can gain from not doing it”. Coaching has given him that.

“Now I know what I really want out of life and know that my old life selling drugs will never give me what I want,” the 25-year-old said.

“Doing the workshop helped me put my life in perspective and see exactly where I was at. It showed me I kept falling back to what I knew rather than pushing through to what I really wanted.

“It helped me clarify what I wanted long-term – to help my family – and that doing that gave me a sense of self-worth. But, trying to provide for them by selling drugs has only ended up hurting them, and me, because I’m not there, and that’s what they really want.”

Michael, 22, who is serving a life sentence in Wandsworth prison for joint enterprise murder, said the coaching helped him see he was living life “like a headless chicken”.

“It makes you analyse your life and helped me to understand where my head needed to be,” he said. “It also showed me that, in the cycle of life, things get harder before they get better. It gave me hope.”

Coaching prisoners seems to make sense, not only at a human and societal level, but also on an economic one. The prisons that run Spark Inside’s programmes are making a small, personal investment in the lives of prisoners with potentially big, long-term gains. Whether the Government is achieving this by focusing the money it does have for prisons on tackling the drugs supply and recruiting new, mainly inexperienced, prison officers should be questioned.

If we can’t wait for the Government to take ownership of our prisons and make them places of change, we should help prisoners to transform and take ownership of their own lives – and to keep themselves out of them.

Hardeep Matharu is a criminal justice and social affairs journalist, writer and researcher. This article was first published on her column examining the prisons crisis on Byline and on the Byline Times. You can follow her on Twitter @Hardeep_Matharu.

Inmates at HMP Maidstone not received any contact since…
There will be 'a price to pay' for locking up prisoners 23…
Covid-19 update: Concerns raised about access to justice…
Shocking ‘crisis’ in UK prisons: staffing, violence, and…
Prisoner petitions UN to protect women during Covid-19…