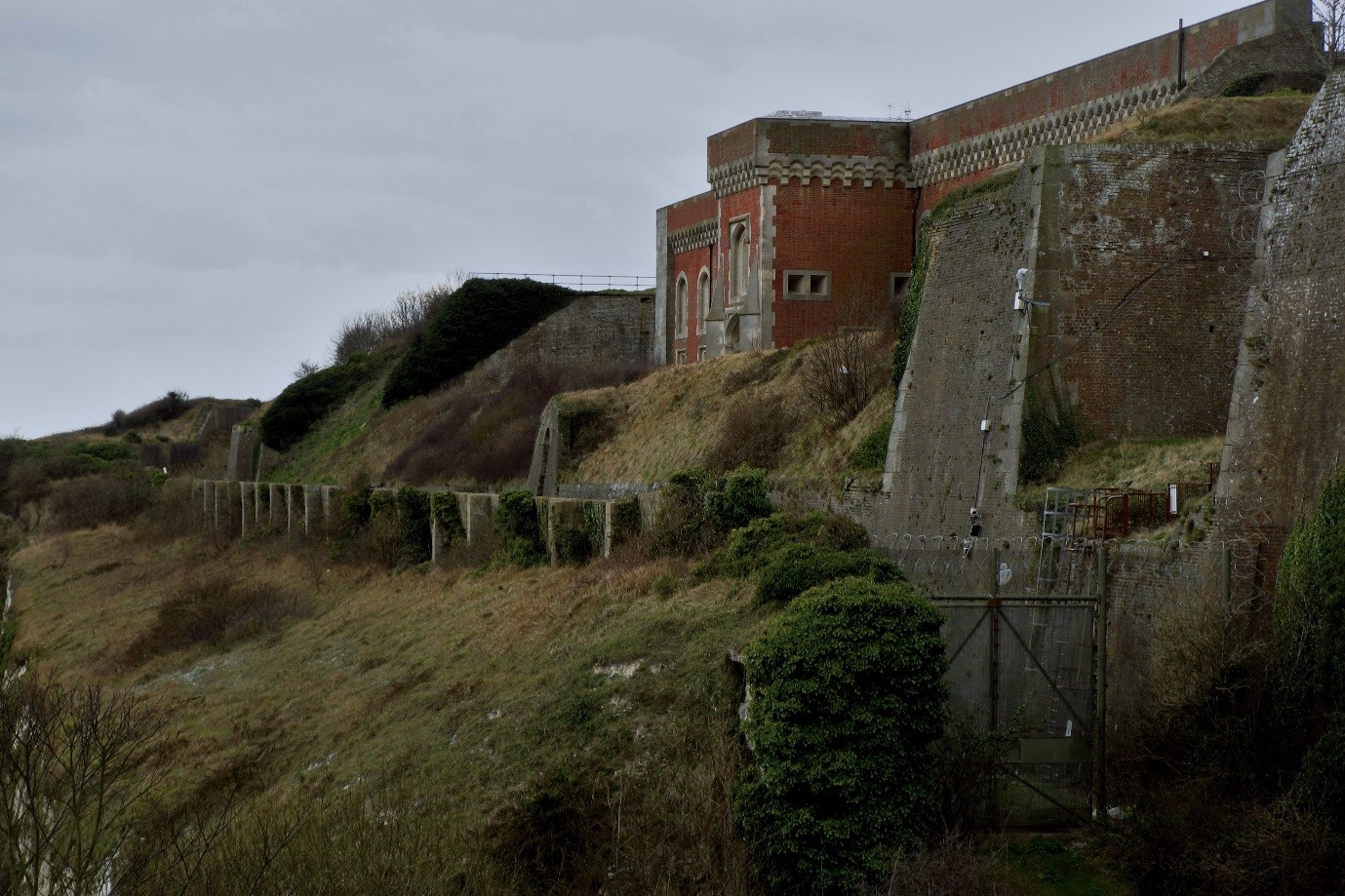 This piece was originally written by Fraser Patterson as part of #Unlocked15 – a virtual, digital tour of the UK’s detention estate that runs up until International Migrants Day in December.

Many people will know Dover as Britain’s main border with Europe and living here you are occasionally reminded on those clear days when you can see Calais. However, for Unlocking Detention we are focussing on the lesser-known side of the Dover border – its detention centre.

I manage the Detention Support Project at Samphire – a charity that provides emotional and practical support for people detained in Dover’s immigration detention centre. This detention centre holds 401 men and is run by the Prison Service. Samphire’s work involves coordinating a volunteer visitor scheme as well as our staff’s casework – aimed at helping people detained get access to legal advice and other support. We also have a project that runs a phone line and supports people released from detention nationwide.

Shifting public opinion
Media interest was revived in the Dover border this summer amidst fears of a ‘swarm of migrants’ coming from Calais. However, Dover detention centre has been at half-capacity since July in anticipation of the surge of refugees that never came. In August, Samphire spoke out against these misleading stories. However, sadly it took pictures of a drowned boy on a beach to shift public opinion and drive a movement to welcome refugees.

We saw the power of this change in opinion when we held our well-attended Facts Over Fear discussion event in Dover. Samphire is also supporting a Refugees Welcome Here demonstration on 17 October. This shows the number of people who are willing to be positive about immigration and refugees, even in a town just down the road from where Nigel Farage launched his anti-immigration election campaign.

Modest increases in the resettlement of refugees to the UK were a welcome result of this public pressure, but we are resettling only 4,000 refugees a year from a region hosting 4.1 million Syrian refugees. More importantly, there is little use in helping refugees abroad if we overlook those who reach our shores. This is one of several reasons why Unlocking Detention is important – detention divides our communities and is no way to welcome refugees.

Soft furnishings and plants
MP David Burrowes said in the detention debate on 10 September 2015 that:

Detention centres are essentially prisons with soft furnishings and some plants.

However, in comparison with the other detention centres, Dover detention centre is further hampered by its Napoleonic era buildings that can’t help but give you a sense of creeping dread as you enter. This was aptly put by the 2014 prison inspectorate report:

Dover is probably the last custodial facility in Britain that is still surrounded by a moat.

However, this gets to the contradiction of immigration detention. In response to inspection reports the Prison Service – who run the detention centre – have made a genuine effort to make the place less ‘prison-like’. Some ‘soft furnishings’ have been placed in the visits hall in place of the bolted down tables and a lot of the exposed brick as you enter has been plastered and painted. In addition, the Detention Centre Rules, recognising that people detained are not serving a criminal sentence, are more lenient than in prisons – allowing detainees to use mobile phones and wear their own clothes.

However, none of this hides the fact that detention centres are places for imprisoning people. The people detained see the same locks, bars and security searches as a prison. The detention centre management will therefore always be fighting a losing battle in dressing this place up as something other than a prison. The illusion that this is ‘detention’ rather than ‘prison’ helps both the Prison Service running it and the British public who have voted for it cope with the brutality of imprisoning people with no time limit. It does little to ease the pain for those subjected to it.

Just holding the keys
It’s important to remember that the Prison Service, just like all of us, are trying to do a good job. None of us want to go to work feeling that we’re harming the world and the Prison Service officers in Dover are no different. This is seen in the ‘not a prison’ paradox but it is also seen in the ‘just holding the key’ justification.

This is illustrated by the 13 year old boy I met recently – he was detained for three weeks in Dover detention centre. This was a result of a catastrophic failure of the age assessment process which should never have allowed his detention. After I met him, I left the visits hall shaking a little at seeing someone so young, so small and so afraid detained with adults. His eyes had welled up as he spoke to me.

As upsetting as it was, it didn’t surprise me. Last year the Refugee Council wrote of errors in age assessment that lead to children detained in Dover and this child was a sad reminder that progress is not being made. We referred the child to the Refugee Council and helped him get out of detention. However, what mystified me at the time was that no staff in the detention centre had questioned the Home Office’s age assessment – why no officer protested when they looked at this boy and thought of their own child.

When I raised this with the management of the detention centre I was told that the Prison Service cannot question people’s detention – no matter how young. The Prison Service, as with the private detention service operators, are in the battle for contracts. It’s for the Home Office to choose who to detain, it’s for the contractor to hold the keys. The fact that no safeguard in detention operates as it should doesn’t factor into the equation – their existence gives everyone enough peace of mind to feel they’re doing a good job.

And it’s not just children, Britain detains torture survivors because the doctor who sees them face to face feels they’ve done their job when they report it to the Home Office. The caseworker at the Home Office will then reject that report without seeing the face of the person detained. We also detain people with severe mental illness and Samphire have seen this repeatedly over the last year. When Samphire have raised it as an issue we’re again told that the detention centre are only holding the keys. This leaves us in a battle to try and support a mentally ill person to both trust us and to interact effectively with a legal adviser.

On all of these issues, we as voters and the Prison Service running the detention centre are lacking the same thing – responsibility. We are imprisoning people. Often those people are children, people who have suffered torture or the mentally ill. It’s not enough to say that you’re just holding the keys, just as it’s not enough to say that you didn’t vote for this – we all need to take the responsibility to change it.

Lawyer and project manager of Samphire, an organisation supporting migrants & asylum seekers facing detention in Dover IRC and destitution throughout the UK

Our print magazine is Proof. Contributors include Michael Mansfield QC, Bob Woffinden, David Rose, Eric Allison and Ian Cobain.
Buy Proof Magazine
The latest issue (Why legal aid matters) includes Helena Kennedy QC and Martha Spurrier in conversation, David Conn on the legacy of Hillsborough - plus how to build your own law centre.
Lawyer and project manager of Samphire, an organisation supporting migrants & asylum seekers facing detention in Dover IRC and destitution throughout the UK