The ‘safety net’ enabling people to access legal aid who would otherwise be denied funding under the 2013 cuts was still failing despite an increase in successful applications, according to a legal charity.

A report published yesterday on the exceptional case funding regime by the Public Law Project (PLP) remained remained ‘much lower than even the Government projected’. The group represented 25% of all applicants granted funding under the scheme between April 2013 when the cuts under the Legal Aid, Sentencing and Punishment of Offenders Act 2012 (LASPO) came in and March 2015.

LASPO slashed vast areas of the legal aid scheme and, in response to concerns about the severity of the cuts, the legislation provided exceptional case funding enabling people to access funding. According to PLP, in its first year fewer than 2% of all non-inquest applications were granted In response to that legislation.

PLP reports that exceptional case funding ‘remains inaccessible in practice for many people’, especially those who are filling in the forms with little or no help.

‘The ECF scheme is not providing the much needed safety net to enable many people who need legal advice and representation in areas removed from scope by LASPO to secure their fundamental rights.’
Public Law Project

The controversial scheme was challenged in the courts on two key occasions: Gudanaviciene and Ors v Director of Research Legal Aid Casework and the Lord Chancellor [2014] EWCA Civ 1622, and I.S. v Director of Legal Aid Casework and the Lord Chancellor [2015] EWHC 1965 (Admin) and [2016] EWCA Civ 464. The first case was successful and the second case failed, although many flaws in the current system were noted and it was observed ‘there have plainly been many difficulties, and the complexity of the ECF form has been common to many of them’.

In response to the flaws identified in those two cases, there were a number of changes made to the ECF scheme; including the threshold for funding to be granted being lowered. A shorter application form was also provided and consideration of the urgency of the application added.

According to the latest statistics from the Legal Aid Agency’s published in March this year, these changes have lead to an increase in people applying for funding, particularly in respect of immigration claims. 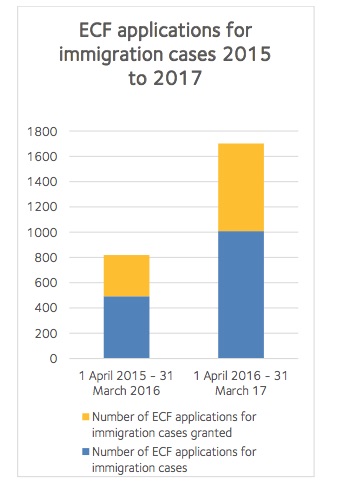 From April 2015 to March 2016, there were 493 applications for funding for immigration cases, of which 326 were granted; in the same period 2016/2017 there were 1,008 applications of which 693 (71%) were granted. Around 80% of these applications were made by legal aid providers, with the remainder being made either by individuals, or with the assistance of charities or pro bono lawyers. This falls way below the government’s own predictions pre-LASPO of 6,500 non-inquest related applications.

PLP’s report concludes that many of the issues identified still pervade the application process. The group names four that they have specifically encountered in their experience dealing with such cases: