‘I was amazed how quickly I became a prisoner. It is brutalizing’

‘I was amazed how quickly I became a prisoner. It is brutalizing’ 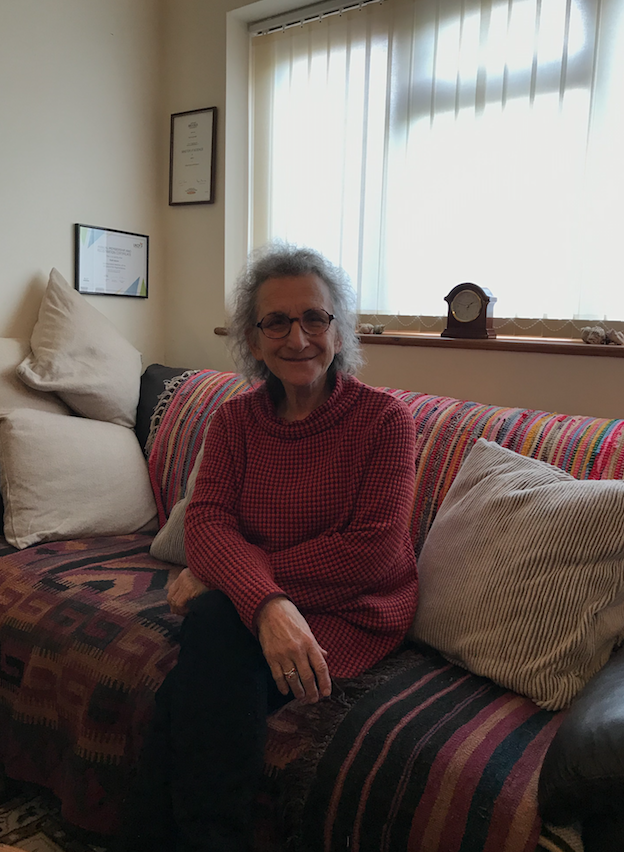 Some 22 years ago charity worker Ruth Wyner was imprisoned along with her colleague  for letting heroin be dealt by service-users in the homeless centre they ran. Two undercover police officers saw street people exchanging bags of heroin on the charity’s premises. The case became a cause célèbre and the pair became known as the Cambridge Two. Here she discusses politics and prison with Matt Hobbs.

‘I used to get people knocking on the door of the night shelter saying that the Cambridgeshire police had driven them ten miles out of Cambridge and dropped them in a field. Picked them up from the street and just dropped them in the middle of nowhere. There was a really harsh climate in Cambridge. I wasn’t aware of the full extent of it.’

Ruth Wyner, then director of Cambridge homelessness charity Wintercomfort, experienced this ‘harsh climate’ first hand in May 1998. She and her colleague John Brock were arrested under the Misuse of Drugs Act, section eight, for (her words) ‘knowingly allowing class A drugs to be traded on a centre that I was managing’. 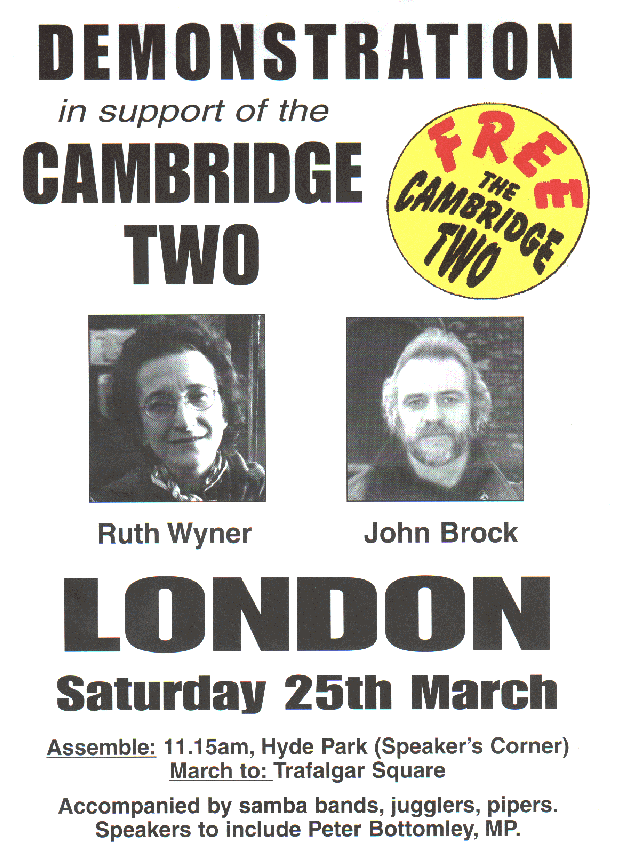 Despite her work in journalism, the homelessness sector and more recently psychotherapy, the fact that Ruth Wyner was one of the so-called Cambridge Two was how I first heard of her. In other words, that she was the charity worker imprisoned for £10 bags of heroin dealt by service-users on her site. Twenty years since her release, I sat down with Wyner to find out why she was locked up for what she felt was simply doing her job.

A born ‘people watcher’ Ruth Wyner trained in journalism, following the Vietnam War marches as well as the environmental movement before experimenting with different styles of living including squatting in Norfolk. It was here she heard through the grapevine that they were looking for someone to become deputy to the then director of the Norwich night shelter. Her flare for innovation within community-led projects secured a reputation for developing and managing homeless services and she was recruited as director of Wintercomfort in Cambridge in 1995.

‘It was a very small organisation initially, run from an old bus in a car-park where most of the local street homeless hung out but then they got some funding to buy up premises beside one of the college boathouses,’ she recalls. ‘I ended up running five projects from there: the day centre, the move-on projects, a rent deposit scheme, an outreach team and the Winter Shelter which became Jimmy’s.’

During this great period of development, with support from the sector, the press and the wider community, Ruth Wyner secured planning permission and raised a million pounds for a hostel project. With the landscape of homelessness in Cambridge changing, the police launched their campaign against Ruth Wyner and her colleagues.

‘They sent in two policemen undercover, one of them called themselves “Swampy”,’ she says. Wyner claims that they infiltrated the day centre a dozen times and on nine occasions they were able to buy a £10 bag of heroin. ‘On that basis they arrested me,’ she continues. ‘I mean that law was really set up for people who run crackhouses, it wasn’t set up for people trying to provide services.’

Despite regular liaison with the police over Wintercomfort’s activities, Ruth Wyner was seen as a threat, but why she became the target of the sting that shook the homelessness sector remains unclear. Some felt it was because the police could, they had ‘been allowed to get away with it’. Wyner believes it was because she became ‘too powerful’; a woman with strong ethical beliefs and the resources to challenge the status quo.

She also believes there was a ‘far right’ element within the force and claims that 18 months after her arrest there was a ‘clean up’ by the Home Office. ‘They realised there was a rather nasty presence in there and they made me a target,’ she says.

Ruth Wyner was sentenced to five years in prison.

Fortunately for Ruth Wyner, she had friends. The writer Alexander Masters recounts the story in his brilliant book Stuart: A Life Backwards. The subject of his book Stuart Shorter, a homeless man, became a leading figure in the campaign to release Wyner and Brock.

Prior to sentencing, they assisted her in navigating the draconian bail restrictions drawn up to prevent her having direct contact with Wintercomfort. Masters became the ‘go-between’, running between her office and Wintercomfort carrying all the messages and resources they needed to keep the organisation going. ‘The police just wanted to get me out of the picture, so Alexander Masters phones up and wanted a job; I thought: “Well he won’t do very well on the day centre because it’s quite rough and ready, but he wrote well.”’ 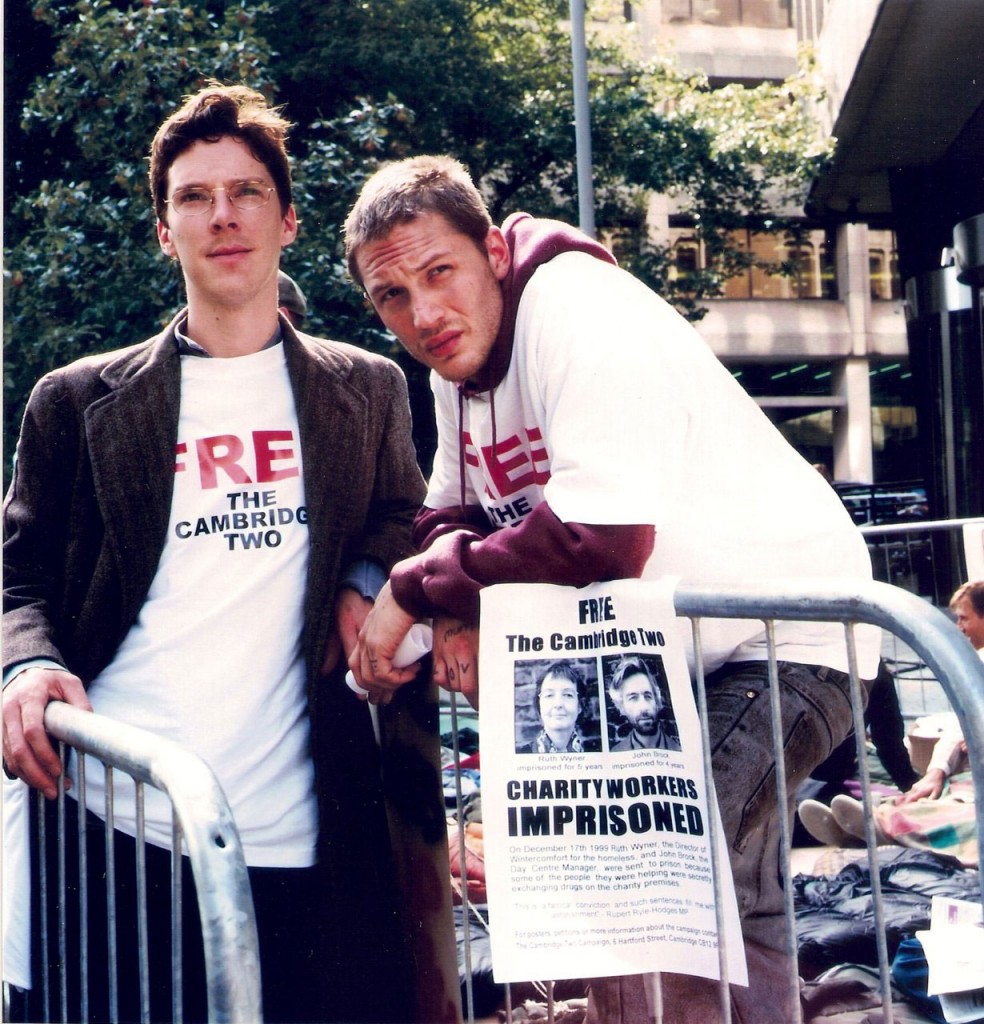 Free the Cambridge Two: Tom Hardy and Benedict Cumberbatch in the BBC version of Stuart: A Life Backwards

Wyner recalls the pair ‘vigorously’ campaigning to publicise the case nationwide with marches in Cambridge and London, as well as ‘a sleep-in’ outside the Home Office. ‘I owe them everything,’ she says.

She credits her psychotherapy training as key to surviving her stretch. ‘I sent myself on the group analysis course and then I got sent to prison,’ she says. ‘They wrote to me in prison saying “We’ll hold your place”, and that was a lifeline; it made me realise that having hope for the future, having something meaningful is absolutely crucial to staying alive when you’re in prison.’

However, this solidarity on the outside and hope for the future did not make her immune to the realities of prison life and she was soon confronted with the very same people she was once trying to support.

‘I was amazed at how quickly I became a standard prisoner, it is brutalizing; right from the start there’s an awful trauma, she says. She recalls her ‘overnight in the cop-shop’ being put in ‘the sweat-box and travelled down to London’. ‘It’s really uncomfortable, a tiny cubicle, no seat-belts, you’re thrown around all over the place. It’s extremely hot and you’re just like a piece of meat and that’s how it feels – you become nothing, you lose yourself.’

‘The vast majority of the people that I met in prison had been abused; if you’ve been abused as a child you’re vulnerable as an adult,’ she says. ‘I don’t think I ever met anybody who was down and out who was nasty because they wanted to be nasty. I knew that homeless people didn’t choose to be homeless and I would say the same about prisoners. It’s because they’re vulnerable and people fight their way out or try and deal with their vulnerability.’

She recalls the kindness of some of the women she me. ‘I used to try to get around the system quite a lot, everybody does that,’ she says. ‘If you get one over the screws it’s a great pleasure, a great pleasure.’

‘In prison you’re spinning. Prisoners have no control over what happens to them, they’ve lost everything, they’re destitute. They are caught up in a maelstrom of our society without any solid boundaries or anything to hold on to. It feels like spinning to me.’
Ruth Wyner

Ruth Wyner calls the prison environment ‘abusive’. ‘And therefore abused people are being further abused,’ she says. ‘In my view locking up a human being is the worst thing you can do to them and I think it’s the same for animals, when I came out of prison I remember once going to a zoo with the kids and I empathized so much with the animals in there. I can see it on their faces, the stress. It affects you viscerally as well as psychologically. I grew a cancerous tumour when I was in prison, I checked with the consultant and he told me that’s when it started.’ That’s just one example, she says. 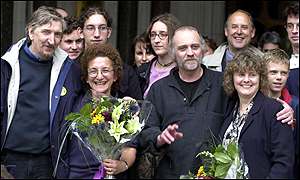 Ruth Wyner was granted a second appeal after the first was denied; this time she won. The sentence was quashed although not the conviction. After seven months in prison for a crime they never committed, Ruth Wyner and John Brock were free.

A couple of months after she left prison, she became involved in group analysis psychotherapy and offered a place at the Turvey Centre, near Bedford. ‘I was given a really nice room with a door into the gardens,’ she says. ‘So at night I used to open that door and go out, just because I could. I think it was quite healing for me; it really helped put me back together.’

She began working within the criminal justice system and set up the Dialogue Trust facilitating therapeutic discussion groups with prisoners. Today she is a board member for the Institute of Group Analysis and runs a low-cost private practice in Cambridge. ‘If you can get people into a safe, humane, supported environment and help them to develop aspects of themselves then they have something to hold on to and a hope for the future,’ she says. ‘Help people to develop as human beings to deal with some of the impact of the traumas that they’ve been through. Give them hope, give them education I think groups are very good at helping people to relate to others and to find themselves and to help each other; helping others is very healing.’

Matt is a mental health caseworker and peer journalist

Our print magazine is Proof. Contributors include Michael Mansfield QC, Bob Woffinden, David Rose, Eric Allison and Ian Cobain.
Buy Proof Magazine
The latest issue (Why legal aid matters) includes Helena Kennedy QC and Martha Spurrier in conversation, David Conn on the legacy of Hillsborough - plus how to build your own law centre.
Matt is a mental health caseworker and peer journalist

2020: Another year in the Justice Gap
'No DSS': Court rules disabled homeless man…
'Final showdown' in case of activist deceived by…
‘If they could they’d send us far, far away’
Criminal appeals process 'impossible' for many women…