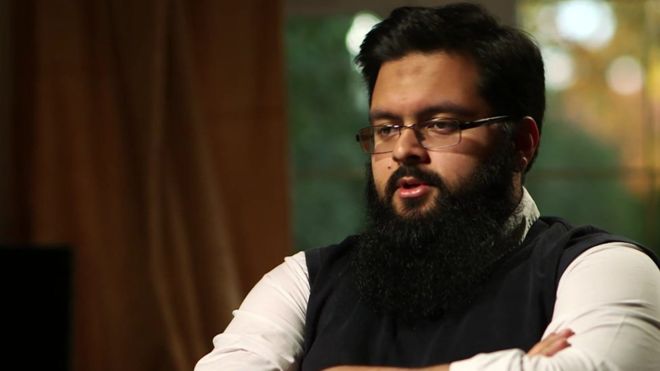 'The circle of inexpressible opinion gets wider and wider': Dr Salman Butt on the Victoria Derbyshire show (BBC)

‘The circle of inexpressible opinion gets wider and wider’: Dr Salman Butt on the Victoria Derbyshire show (BBC)

‘My aim isn’t just to clear my name. My aim is to open up a broader debate and conversation,’ says Dr Salman Butt, a controversial Muslim activist who this week began the first legal challenge to the government’s main counter-terrorism strategy.

A British Muslim activist and writer, Butt started legal proceedings after being labeled a ‘non-violent extremist’ by the government. He spoke to Mehdi Shakarchi at the Royal Courts of Justice on Tuesday at the end of day one of a three-day hearing. The judicial review proceedings concern the Prevent strategy, which came into force in September 2015 under Counter-Terrorism and Security Act and imposed a legal obligation on universities and colleges to prevent ‘hate preachers’ radicalising students on campuses. The issue rose to the top of the national security agenda after it emerged that Mohammed Emwazi, known as Jihadi John, may have been radicalised while studying in London.

‘Hate speaker’
A Downing Street press release at the time explained that the measures were designed ‘to ensure that those espousing extremist views do not go unchallenged’. Number 10 then identified Butt as one of six radicals who held views that ran ‘contrary to British values like democracy, free-speech, equality and the rule of law’. It labeled the activist, who is chief editor of the online discussion forum Islam21c, as an ‘extremist’ and ‘hate speaker’.

Butt wanted to pray after his day in court and so we meet outside the prayer room at the Royal Courts of Justice. The activist, who completed his PhD at Imperial College London, used to be a regular speaker at universities but claims not to have been invited since September 2015. He blames this on a ‘culture of fear’. ‘Many charities and universities are intimidated,’ he says. ‘There are so many eyes on them looking out for signs of extremism that they would rather not have the headache of inviting someone like me.’

The government has put pressure on the National Union of Students and other student groups to abandon attempts to oppose the counter-radicalisation strategy. Butt reckons that that Prevent is curtailing freedom of speech.

‘The circle of inexpressible opinion gets wider and wider. This government has developed a taste for arbitrarily restricting certain types of speech. We have already seen it happening with anti-fracking demonstrators. We have even seen the leader of the opposition being called a terrorist sympathizer.’
Dr Salman Butt

He takes particular issue with what he considers to be the vague definition of the assessment criteria known as ERG22+ used to assess whether an individual is an extremist. ‘This type of psychology is so vague that it lends itself to being abused by people,’ Butt says. ‘These things are almost like self-fulfilling prophecies rather than tools with any scientific basis.’

His lawyer, Saimo Chahal QC, joint head of public law at Bindmans, argues that the Prevent conflicts with the right to free speech enshrined in the Education Act. ‘The definition in the Prevent guidance of “non violent extremism” is conflated with terrorism,’ she says. ‘That is very problematic and does not accord with the definition of “terrorism” in the Counter Terrorism and Security Act.  Other definitions such as “British values of democracy” are also not defined and leave them open to construction. These definitions fail the test of legal certainty and clarity as individuals and organisations need to know that they are applying the correct definitions.’

Chahal reckons that this lack of clarity has resulted in her client being named as an extremist. ‘There have been very serious and unfortunate consequences arising for Dr Butt which could have been avoided,’ she adds. If the challenge is successful, the court could quash the relevant parts of the Prevent guidance. ‘The other part of the challenge is to the Home Office Unit which collects data on “extremists”,’ explains the lawyer. ‘We say their activities are unlawful and breach the rules of natural justice.’

Doing society a favour
‘Extremism’ is defined in the 2011 Prevent strategy as vocal or active opposition to fundamental British values, including democracy, the rule of law, individual liberty and mutual respect and tolerance of different faiths and beliefs.

The Home Office has accused the father of three of expressing views on his site and through social media that many would consider abhorrent – for example, comparing homosexuality to paedophilia and supporting female genital mutilation.

Butt denies ever having expressed any intolerant views in relation to homosexuality and condemns FGM. ‘They are just allegations, and they are subject to a defamation case that is happening in the next few weeks,’ he says.

‘The issue of homosexuality is a case of fundamentally different world views describing something differently,’ he continues. ‘I don’t mind having a conversation about the in a genuine forum for discussion and discovery but what it tends to be is more of a hegemonic discourse.’

Butt goes on to say: ‘Legally people have a right to do a whole load of things in which I, as a Muslim, shouldn’t engage.’

What about his own activism? Butt says that ethos at Islam21c is ‘to try and push for Muslims to be as rounded as possible’. ‘We see ourselves and we see other Muslims as activists in all areas. So if there is an issue concerning corporate greed and global capitalism, Muslims should be active in those areas. If there is an issue with substance abuse, or the NHS, Muslims should be active in those areas. Likewise, if there an issue with people being far away from their creator and not giving him his due rights, we should be activists in reminding people. We try and see it as an interconnected mesh.’

The activist claims himself to be an advocate of freedom of speech and tolerance. So where, I ask, does he stand on the cartoons of the Prophet Mohammed? ‘Muslims should speak out against it peacefully. That’s how a healthy society operates,’ he replies. ‘Not by using the strong arm of the law, or getting the authorities to silence free speech but for civil society to be strong enough to decide in the context of a debate whether something is appropriate or inappropriate.’

He argues that suppressing certain types of speech under the Prevent strategy is counter-productive. ‘By giving so-called extremist views a peaceful outlet, it acts as a firewall mechanism to prevent violence,’ he says. The government has stated that the expression of non-violent ‘extremist’ views can create an atmosphere conducive to terrorism and can popularise views, which terrorists then exploit.

But surely Islamic extremism – which is what Prevent is designed to tackle – is a major problem in the UK? ‘No I don’t think so,’ he replies. ‘If anything I think this is indicative of our way of designating things – words like “terrorism” and “extremism”. If a particular crime is committed by non-Muslims, it is not linked to national security. Crimes of white people are treated as isolated cases.’

What about reports of young British Muslims going off to fight ISIS? ‘I’d question the figures given in relation to those that have gone to Syria or Iraq to join ISIS,’ Butt replies. ‘In any case, there is no evidence about whether those going to Syria and Iraq are fighting for them or against them.’ According to the government, the number of Britons who have gone to fight has risen to 850 including some 100 who have been killed.

Butt sees this week’s challenge and, more generally, Muslim opposition to Prevent as ‘doing society a favour’. He says Muslims are ‘the vanguard for society today when it comes to protecting the society from arbitrary exercise of power by the state. I get a lot of messages of support because people have been waiting for a significant challenge like this, including non-Muslims.’