Derek Chauvin: ‘There was only one conclusion available to the jury and yet the world was still surprised when they reached it. ‘

Derek Chauvin: ‘There was only one conclusion available to the jury and yet the world was still surprised when they reached it. ‘ 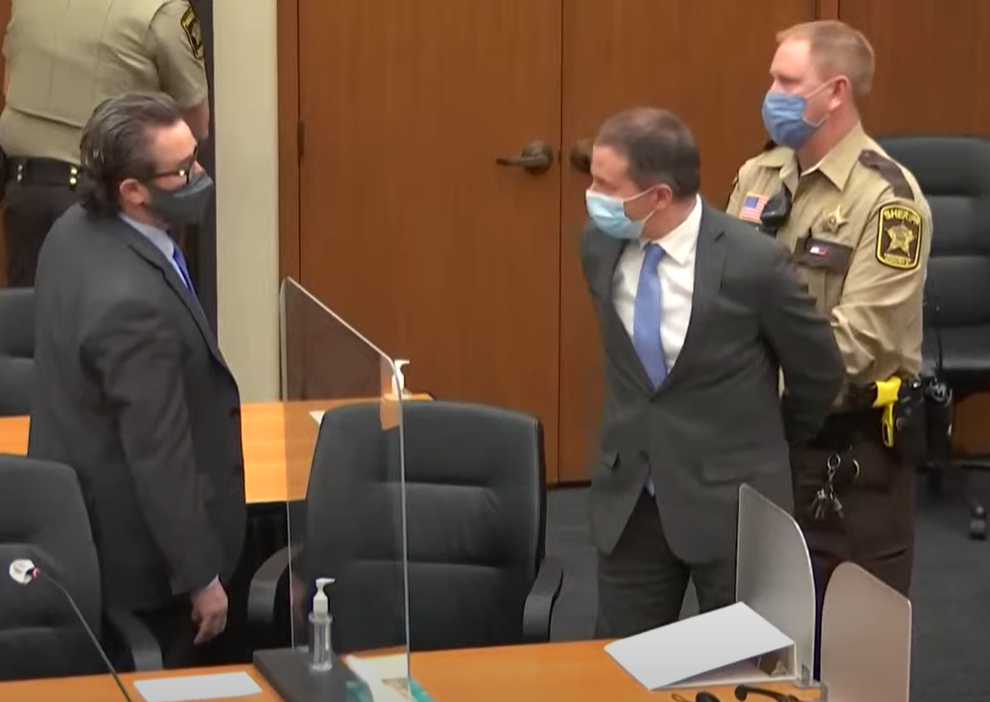 As his sentence was handed down in the courtroom, Derek Chauvin was as outwardly calm as he had been when he murdered George Floyd.  Only his eyes betrayed the turmoil that must have been raging within, darting from side to side as Judge Peter Cahill read out the verdict of the jury, who found him guilty on all three counts: second-degree unintentional murder, third-degree murder, and second-degree manslaughter.  And as Chauvin was led, now handcuffed, from the courtroom, the events of last summer – within the legal sphere at least – were brought to a close.

Politically, however, the storm is still raging. Little embodies the political tension more than the hundreds of people gathered on the lawn outside the Minneapolis courthouse, and who burst into cheers when their phones buzzed with news of Chauvin’s conviction.  This was not celebration borne of excitement, but of relief, with many doubtful that the jury would be willing to convict a police officer of murdering a black man while ostensibly acting in the course of his duty.

Such celebration shows how many Americans – particularly those from Black and ethnic minority communities – are sceptical about the capacity of their nation’s political and legal institutions to deliver justice for them.  There should have been no doubt about the outcome of this trial.  The jury – and the world – was presented with a video over nine minutes long documenting Chauvin’s lynching of Floyd, his uniformed knee relentlessly pressing down on Floyd’s neck while he gasped for breath and asked for his mother.  Only one conclusion was evidentially and emotionally available to the jury, and yet the world was still surprised when they reached it.

But this surprise was rational.  Even after the events of last summer, American police have continued to shoot and kill Americans, often for little reason at all. As the New York Times has reported, over the course of Chauvin’s trial, an average of three Americans were killed a day, while last week saw Daunte Wright die at the hands of the police after he was pulled over for a minor traffic violation, with the officer apparently confusing her handgun for a taser, and Adam Toledo, a thirteen year old boy, shot and killed despite following the officer’s orders.  In most cases, these killings are seen as unexceptional, an unfortunate, but necessary reality of policing in American.

This acceptance of the status quo needs to change, but it is tragic that, in some ways, the verdict in the Chauvin trial may harm the political movement for police accountability.  American police officers are notoriously hard to successfully prosecute for actions they take while in uniform, with a vast array of defences available to them, not least that set out in Graham v Connor. According to this precedent, provided an officer can argue that their actions were subjectively reasonable – even if from the point of view of an objective bystander, they were anything but- they are lawful. It is defences like this that explain why, since 2005, there have been only seven successful prosecutions brought against police officers for murder, but thousands of deaths at the hands of the police.

Chauvin was unwilling to take the stand to make this defence, and unsurprisingly, no officer was willing to say that faced with similar circumstances, they would have behaved in a comparable way.   The Minneapolis chief of police, Medaria Arradondo, even breached the ‘blue wall of silence’ to condemn Chauvin’s conduct and to claim that ‘to apply that level of force to a [handcuffed] person proned-out…in no way, shape or form…is policy’.

Although this defence – or similar – may not have come to Chauvin’s aid, for most American officers such defences do not so much create loopholes to escape through as expressways to parade down, giving them carte-blanche to behave as they will.  For the American justice system to live up to its name, such defences need to be reined in, with officers made truly accountable for their actions.  However, in being able to convict Chauvin while the status quo persists, defenders of the current system are handed ammunition to argue that it is legitimate and effective, holding the truly bad apples – like Chauvin – accountable, while protecting the majority of honest and ‘noble’ officers, who are seeking only to keep themselves and the public safe.

What such defenders intentionally ignore is the thousands of unjust results that have come before, and the fact that it took prolonged video evidence of an officer suffocating a man to death for justice to be done here.  In the average year, American police officers kill a thousand people, and in most cases, do so with absolute impunity.  It is this narrative that is dominant in the minds of police officers, who are able to discharge their weapons with little thought as to the consequences they may face. In an ideal world, the common humanity they share with their victims would be enough, particularly when they are unarmed with their hands raised, as Adam Toledo was. But we do not live in an ideal world, and the perpetually high death tally suggests that the mantra of ‘shoot first, ask questions later’ is now too deeply ingrained in the minds of ‘America’s finest’.

For those who want to see genuine change in the American justice system, they must seize on the opportunity to show how Chauvin could have so easily have gotten away with his murder.  Without the bravery of Darnella Frazier, who filmed Floyd’s murder and broadcast it to the world, and without the groundswell of outrage this generated, Floyd would have simply been another statistic, a black man who died from ‘physical distress’, as the original police report mendaciously originally accounted for his murder.  They must use the political movement that Floyd’s death has sparked to finally show how institutional racism is embedded deep within the culture of police forces across America, and how the architecture of the justice system is built to deprive Black and ethnic minority people of justice, rather than to dispense it.

Nancy Pelosi, Speaker of the House, crassly referred to Floyd’s death as a sacrifice.  No person should be expected to give up their life for the system to change, and Floyd was no exception. But if his murder can lead to the root and branch change needed in the American police and justice system, perhaps it can offer some solace to his friends and family, and for them to feel as though his death was not for nothing.

For us in Britain, while the consequences for those who face such prejudice may be less severe, the problem is no less endemic. But while the American political class is beginning to genuinely grapple with the racism that is rife within its culture, our political class continues to stick its head in the sand. The Sewell Report denied the obvious reality that is institutional racism, desperately trying to explain away the discrimination that Black and ethnic minority people still face in Britain today, while Conservative MPs are more invested in calling for an investigation of the Runnymede Trust for ‘pursuing a political agenda’ in criticising the Sewell Report than in remedying inequality.  All to often, Britain is willing to follow in America’s lead.  As the Biden Administration begins to genuinely address racial equality, this is not the time for Johnson’s government to set a new course.