‘As a report on racial inequality, it’s unfit for purpose – but as propaganda it’s exceeded expectation’

‘As a report on racial inequality, it’s unfit for purpose – but as propaganda it’s exceeded expectation’ 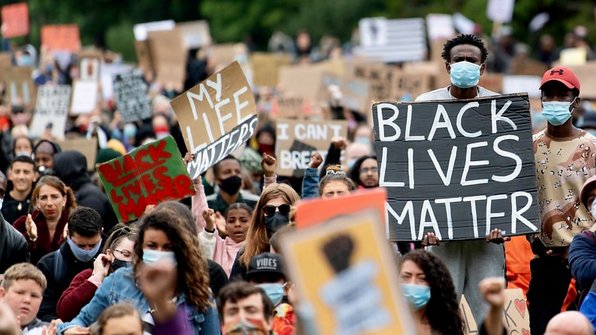 After a year seeing the brutal suppression of Black Lives Matter protests, the arbitrary detention of asylum seekers in appalling conditions, and the continued disproportionate targeting of ethnic minorities by the police, it comes as a relief to be told that we have been living through a frenzied fever dream, and that institutional racism in the UK is nothing but a particularly unpleasant figment of our imaginations.

While the UK is not yet a bucolic haven of racial equality, the fault-lines of inequality riven across our nation ‘often do not have their origins in racism’ according to the government’s Commission on Race and Ethnic Disparities. Rather, the Sewell report concludes that it is the ‘attitudes of…minority cultures themselves’, as well as ‘social class, ‘family’ culture and geography’ that better explain the continued iniquities in our society.

If the government was disappointed by the conclusions of the last report it commissioned, the Independent Review of Administrative Law, which broadly concluded that there was no reason to wage war on the judiciary, the report of this Commission must have come as a relief. While acknowledging racial inequality – as though any other conclusion was plausible – it has done so in a way that builds upon the government’s preferred narrative, laying much of the blame at the feet of those facing discrimination, rather than at the feet of those discriminating. It feeds into the insidious line of argument that it is not us, as a society, that must change, but those that wish to participate within it as it exists today.

Little demonstrates this more effectively than the report’s grotesque distortion of the British slave trade. Rather than admit that our current curriculum white washes the slave trade, emphasising Britain’s role in its abolition, not its perpetuation, the report advocates considering how ‘Britishness influenced the Commonwealth and local communities’ and the writing of a ‘new story’ that ‘speaks to the slave period not only being about profit and suffering but how culturally African people transformed themselves’.

This reframing of the debate seeks to emphasise how British institutions, especially schools and universities, have paved the way for ethnic minorities to thrive in Britain. Through focusing upon the relative academic success of some ethnic minority groups, it advances the belief that their success is down to grit and perseverance, and that the failure of any other such groups is down to the absence of this determination, rather than to factors beyond their control, like discrimination. In doing so, it gaslights ethnic minorities, who strive and strive to no avail, while inculcating a sense of resentment in parts of the white population, who will cling to the report as evidence that protests like Black Lives Matter are nothing but unhinged hysteria, so gouging even deeper divides into British society.

Such a sense of resentment is further encouraged through focusing on the underperformance of underprivileged white children, who are consistently the lowest performing cohort in schools. By dwelling upon how they also struggle, so shifting the attention onto ‘disadvantaged’ children generally, rather than those from ethnic minorities, the implication is that a truly institutionally racist system would consign ethnic minority children consistently to the bottom of the pile, and that as they are not, racism cannot be a major inhibiting factor. What this fails to recognise is that different factors may be driving the underperformance of different groups, and that while class or familial ambition may check some students’ progress, discrimination, whether intentional or not, may check the progress of others.

It becomes more challenging to sustain this narrative as the report considers other parts of British society, yet the Commission doggedly pushes on, reiterating that it is not racism that explains the racial inequalities that still beset our nation, but something else. Finding that applicants for jobs with ethnic surnames are less likely to be called for interview than those with more ‘traditionally British’ surnames, the Commission refuses to come to the obvious, if not the only fair, conclusion, which is that non-white candidates are discriminated against. Instead, it turns itself inside out to reach an alternative explanation, which is that it is ‘unclear if this effect is about race, class or perceived foreign culture’. Even if you accept that treating someone differently because of a ‘perceived foreign culture’ isn’t also race discrimination, to shoehorn in the issue of class makes it abundantly clear that the Commission has little interest in addressing the issue of racism, but significant interest in stoking class division.

The contortions continue when the Sewell Report turns its attention to crime. After inexplicably noting that ‘the majority of people in the country do not commit crime’, the report almost reaches a coherent conclusion, quoting 2017’s Lammy Report, which found that many of the reasons for the overrepresentation of ethnic minorities ‘lie outside the criminal justice system’, for instance, being due to the likelihood of those from a Black background specifically being ‘more… likely to live in poverty… to grow up in a lone parent family… to be permanently excluded from school…’.

From here, the natural conclusion is that those from Black backgrounds face particular disadvantages here because of their race. Indeed, little shows this more than the overwhelming figures on stop and search, which show that Black people are nine times more likely to be stopped and searched than are white people, but are very unlikely to be arrested, with fewer than one in five stops of Black people resulting in an arrest. In contrast, while white people are rarely stopped and searched, they are more likely than not to be arrested after the search. These figures alone reveal that police officers, whether in London or elsewhere, are over searching Black people and under searching white people, yet the Sewell Report refuses to conclude that this is because of institutional racism among the UK’s police forces, intentional or otherwise.

And when it comes to immigration and the Home Office, the Report has almost nothing to say. Despite the Home Office continuing to put up banner headlines scapegoating immigrants and asylum seekers, and still confining refugees in barracks deemed unfit for human habitation, there is no consideration of how this system of governance might drive racism in Britain. The fact that Theresa May’s Home Office actively sought to make Britain an unsafe place for ethnic minority people to live in with her ‘hostile environment’ policy is seemingly irrelevant, as is the fact that for much of the past decade, the Home Office has been unlawfully deporting the Windrush generation – British citizens – back to the Caribbean.

Rather than meaningfully engage with the lived experience of ethnic minorities in the UK, a panel appointed for their scepticism about institutional racism have produced a report sceptical about institutional racism. They are not wrong to point to the struggles of other communities, particularly the white working class, but they are wrong to do so in a way that pits the white working class against ethnic minority people. Sparking such a struggle may help the electoral ambitions of Boris Johnson’s government, which needs white resentment if it is to survive in office, but it does nothing to help ethnic minorities living in Britain. As a report addressing racial inequality today, it’s painfully unfit for purpose. As propaganda for the government, it has exceeded expectations.