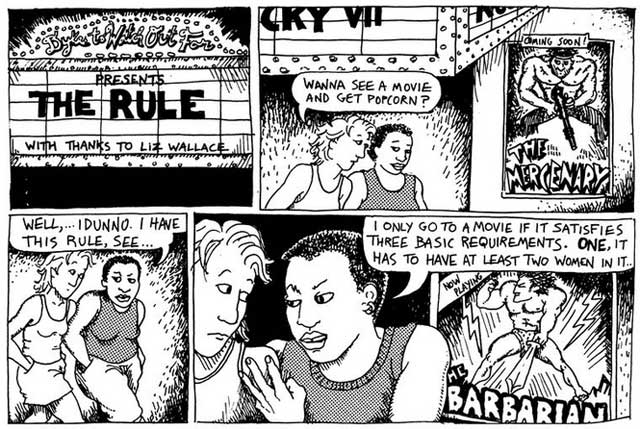 The Bechdel Test first appeared in graphic novelist, Alison Bechdel’s comic Dykes to Watch Out For. Published in 1985, the test has since taken on a life of its own and has become rather well known within feminist and film circles. Very simply, it asks whether a work of fiction features at least two women who talk to each other about something other than a man.

As you can imagine, many films fail spectacularly (test it with some of your favourites). The test sheds light on the ongoing invisibility of women on the silver screen and the lack of women’s voices and experiences, with women portrayed only in relation to their relationship with men. Dykes to Watch Out For obviously blows that concept out of the water.

So what has this to do with the Supreme Court? Well, yesterday the highest court in the land considered the position of hundreds of pregnant women forced to travel from Northern Ireland to England every year to pay hundreds of pounds for an abortion (A (by her litigation friend B) and B v. Secretary of State for Health on appeal from [2015] EWCA CIV 771 – as reported yesterday on the Justice Gap here.

A Supreme Court case is obviously not a fictional feature film, but with the ‘techno-logical’ advances in the courtroom, as Lord Neuberger would put it, and the broadcasting of Supreme Court hearings, I thought it might be interesting to explore whether the hearing passed Alison Bechdel’s feminist film test.

Substantial numbers of women travel from Northern Ireland to access abortion services in England and Wales due to the strict nature of abortion laws in NI. In this case, the claimant travelled from Northern Ireland to Manchester in order to have an abortion. She was 15 years old at the time and travelled with her mother – they are referred to in the judgment as A and B.

Their ordeal in obtaining funding, travelling and their experiences are dealt with in three paragraphs (of 70) in the High Court judgment. Both the High Court and the Court of Appeal rejected the challenge and the case was appealed to the Supreme Court.

At the Supreme Court, A and B argued that Jeremy Hunt as Secretary of State for Health in England was in breach of his public law duties for failing to provide an exemption for Northern Ireland women to receive the treatment when it was within his power to do so. In other words, that the failure to exercise this discretionary power was unreasonable or irrational. The claimant also argued that it was in breach of her right to non-discrimination under Article 14 of the European Convention of Human Rights when read together with international human rights law – such as the Convention on the Elimination of All Forms of Discrimination Against Women.

In the High Court, the hearing quite obviously failed the Bechdel Test. Mr Justice King found against A and B, whose lawyer Mr Steven Cragg QC along with his junior Dr Austen Morgan, battled against Mr Jason Coppel QC who represented the Secretary of State for Health (Mr Hunt). In the Court of Appeal, the situation remained rather depressing with Lord Justice Moore-Bick, Lord Justice Elias (writing the majority judgment) and Lord Justice McCombe hearing Mr Stephen Cragg QC, Mr Jason Coppel QC, and Mr Jude Bunting (for the Intervener Alliance for Choice) make submissions. A slight ray of hope was the presence of Caoilfhionn Gallagher, acting for A and B as a junior to Mr Cragg. But the Chambers and Partners junior human rights and public law barrister of the year didn’t make submissions and there were no female judges to have a dialogue with in any case.

So what happened in the Supreme Court? Did a case about women’s fundamental reproductive rights feature any dialogues between women or were we faced with yet another situation of women’s reproductive choices and the laws regulating women’s bodies being discussed by a room full of men (well intentioned as they might be).

The odds for a pass were markedly higher from the outset. First, the panel of five judges included a female judge meaning that a pass was at least a possibility. Secondly, a number of interveners had joined the case with Helen Mountfield QC leading Jude Bunting, and Heather Williams QC and Kate Beattie intervening through written submissions. Jason Coppel QC also had a female junior, Katherine Eddy. At least, Supreme Court TV could broadcast a more equally representative and democratic advocates bench, with a front row of equal representation and a whole back row of female lawyers.

In terms of feminist substance, the hearing included important arguments put forward by Steven Cragg QC and Helen Mountfield QC on sexual and reproductive rights, gender equality, dignity and autonomy. The appellants and interveners both placed emphasis on the Convention on the Elimination of All Forms of Discrimination Against Women (CEDAW) and a woman’s fundamental right to self-determination. On the international law, Mountfield told the bench that ‘values don’t dictate but they inform’ interpretation. Whatever the outcome, yesterday’s hearing put the distress and difficulties Northern Irish women and girls in A’s situation face in the legal spotlight. Judgment is eagerly awaited.

Keina is a barrister at Doughty Street and practises in the areas of media law, Court of Protection, inquests, and actions against the police. She also specialises in international human rights law and public law

Our print magazine is Proof. Contributors include Michael Mansfield QC, Bob Woffinden, David Rose, Eric Allison and Ian Cobain.
Buy Proof Magazine
The latest issue (Why legal aid matters) includes Helena Kennedy QC and Martha Spurrier in conversation, David Conn on the legacy of Hillsborough - plus how to build your own law centre.
Keina is a barrister at Doughty Street and practises in the areas of media law, Court of Protection, inquests, and actions against the police. She also specialises in international human rights law and public law

Supreme Court lowers standard of proof for inquest…
Half of women convicted under joint enterprise not…
A Bill for Justice: next step in campaign to reform…
Can law be represented in a comic?
Permission refused for landmark challenge of CPS…